A lot of drama went down last night between Geoffrey Paschel and Deavan Clegg, and while some of the evidence has since been deleted, we still have quite a bit to share with you.

It seems the argument stemmed from last night’s episode of 90 Day Fiance: The Other Way, of which Deavan is a current cast member.

After watching the latest episode, the mom-of-two shared in her IG stories that TLC did not state the correct age of her daughter Druscilla on the show.

A blogger captured the screenshot and after it was posted Geoffrey Paschel decided to comment, saying that Deavan doesn’t know her child’s age.

This did not sit well with fans who felt that the Tennessee native was in no position to comment about Deavan or her child.

However, Deavan eventually caught wind of Geoffrey’s comment and she was furious.

She immediately shared a message to Geoffrey in an IG post and tagged him in the process.

In the message, the 23-year-old called Geoffrey “a disgusting human being.” She continued, writing, “You’re really going to come after me and my daughter like that?”

She also referenced his child custody cases in her message adding, “I’m not the one who lost custody, you did.”

Deavan also mentioned the fact that Geoffrey was allegedly fired by TLC.

As you know Geoffrey was featured in Season 4 of 90 Day Fiance: Before the 90 Days, but he was not invited to take part in the Tell All.

“There’s a reason you were fired,” She says. 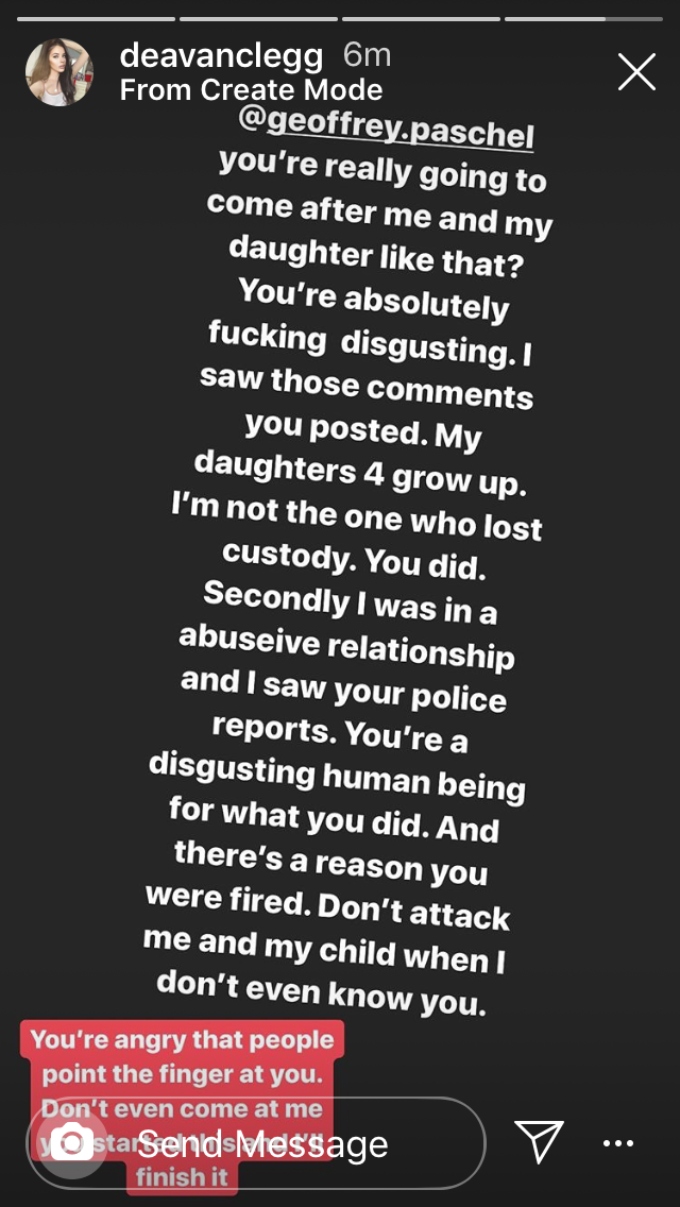 As fans defended Deavan in the now-deleted posts, Geoffrey continued to attack the Utah native, which seemed to anger her even more.

Deavan then took her angry rant to Instagram Live, blasting Geoffrey for commenting about her child.

The video is laced with F-bombs, so keep that in mind before you press play.

In the video, Deavan called Geoffrey an abuser and shared that she too was abused. Later, Deavan made it clear that she said “allegedly” and then told Geoffrey he should be thankful for that.

However,  the 90 Day Fiance alum joined Deavan’s live and trolled her with several comments saying, “You’re going to talk s**t about me and play a victim card…too funny.”

As she continued to curse him out, he kept trolling with comments such as, “This is hilarious, you are an airhead.”

He also said, “Those poor kids, pay attention to them” and “Ha ha you’re a joke.”

Here’s the listing for Deavan and Jihoon’s Airbnb on The Other Way...