Ashley Martson blasted a report that she and Jay Smith are fighting in quarantine amid the coronavirus pandemic. The 90 Day Fiance alum is using social media to set the record straight and defend her marriage.

Fans of the hit TLC show were introduced to Jay and Ashley during Season 6. Their journey has been rocky at best, with several breakups, cheating scandals, and a last-minute change in wedding plans.

They continue to fight for their marriage, even sticking up against the haters and false claims concerning their romance.

If Ashley and Jay were fighting in quarantine, could anyone blame them? It isn’t easy being in self-isolation with a significant other, even for those that are genuinely in love.

In Jay and Ashley’s case, though, claims of their bickering are reportedly exaggerated and not true.

The Blast recently reported the 90 Day Fiance couple was back together but also back to fighting after Jay shared a video of him BBQing in their backyard.

The website states Ashley is heard in the background yelling at her husband while she showed off his food.

“It’s not going to close if the lids not shut” and “LOOK WHAT YOU DID” are antics the website claims Ashley did in the footage to demean her husband.

Ashley was not happy with The Blast and let them know it in an Instagram Story featuring the article.

“Hey @blast, y’all are dumb for writing this wack a** story. Anyone who saw the video heard me laughing and joking and saying a curse word in patois and cracking up. Please find something better to write about,” she wrote. 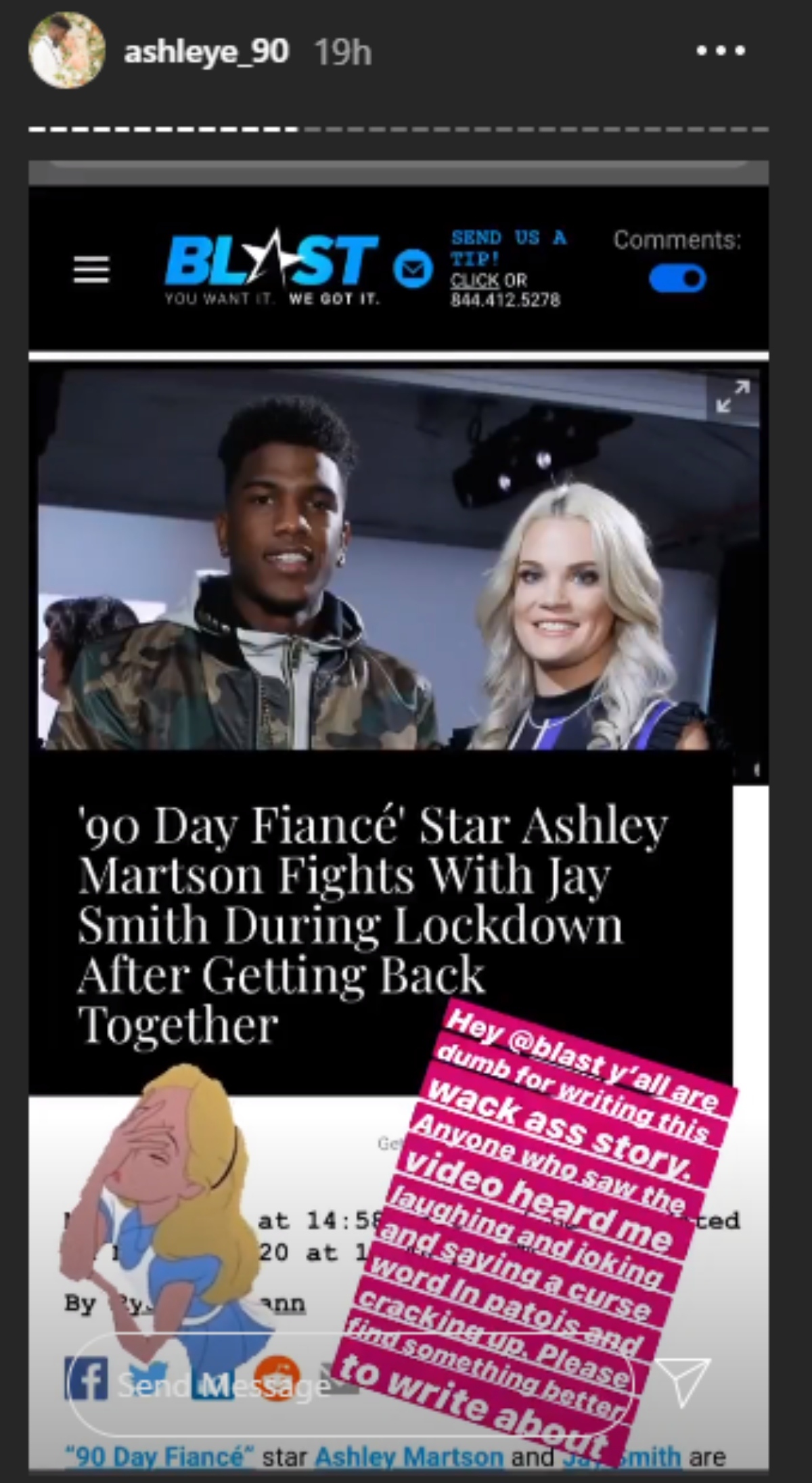 Will their latest reconciliation last?

After nothing but ups and downs throughout their marriage, fans are skeptical that Jay and Ashley’s reconciliation will last. It is a road that has been traveled many times with this 90 Day Fiance duo.

They both claim this time around the relationship is better than ever, which will help them last forever. Also, when they called off their divorce, Ashley shared they were putting the past behind them.

“I feel like if you have trouble in your marriage or relationship and you choose to try it again, you have to tell yourself before you get back into that relationship ‘the past is the past’ and you chose to forgive what they did,” she said in a YouTube Q&A regarding how they are moving forward.

Jay Smith and Ashley Martson from 90 Day Fiance are doing just fine. She has blasted reports they are fighting in quarantine.

Laura Jallali calls Evelin Villegas ‘pure evil’ as she warns that the...

Kenneth’s family is worried about move to Mexico to be with Armando...