There’s a whole lot of karma and regret in “What Might Have Been.”

In a nutshell, Yidu (Dianne Doan) has a way better haircut this week and has Ragnar (Travis Fimmel) hooked on Opium or something of that ilk.

First wives’ club member Lagertha (Kathryn Winnick) is eventually reunited with a remorseful and melancholic Ragnar, whose drug-hazy goggled reunion at a distance with his estranged brother Rollo (Clive Standen) at the end of the episode precedes the Viking sacking of Paris, part deux.

Ecbert (Linus Roache) is up to no good sending Alfred (the Great) off to Rome with perpetually sulky/angry Aethelwulf (Moe Dunford) and fey spirit Harbard (Kevin Durand) is back in a mystical visit to reassure Queen Aslaug (Alyssa Sutherland) and her youngest sons Sigurd (Elijah O’Sullivan) and Ivar (James Quinn Markey) all will be well.  Judith is still just heaving bosom Judith.

Bjorn (Alexander Ludwig) is beyond angry to see Uncle Rollo in proud Frankish blue at the river’s edge while Floki (Gustaf Skarsgård) cannot resist throwing his Viking shipmaster shade as he gazes upon the inferior designed French ships. The shieldmaidens under Lagertha’s command have the oily Erlendur (Edvin Endre) on board, but we think he won’t be breathing for long.

Will Rollo’s river chain trap idea work? Next week we will see.

Until then TV critics April Neale and Ernie Estrella discuss the episode where a whole lot of unsaid feelings are simmering.

April Neale: Ragnar’s return to Paris is the most unmotivated and distracted venture of his so far. He’s on the Chinese goofballs and has dragged his oldest sons with Aslaug along to battle. What do you make of where Ragnar’s head is truly at as he faces his brother?

Ernie Estrella: I think he’s either not sure of what he’s about to face or he wants his sons there to see what needs to be done. He’s about to face off with his brother and prove to all of these other would be kings that he is still in charge. That said, his head is off anywhere but in the game. 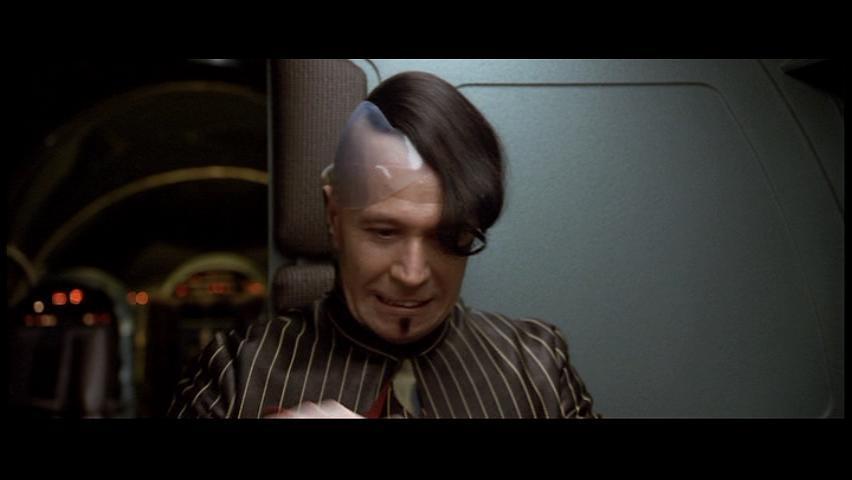 AN: Let’s discuss Harald (Peter Franzén), Halfdan (Jasper Pääkkönen) with THAT Gary Oldman Fifth Element haircut, and their new friend Floki becoming cruel and reckless. Executing and burning alive the enemy to honor their gods. They’re total dicks and Ragnar and Bjorn know it. What say you?

EE: I know there’s a big King Harald in the Vikings history books but I hope it’s not this guy. I’m not thrilled by his actions or luring Floki out from under Ragnar’s watch. Not that he’s been given much choice. I personally hope for greater things with Floki but I’m not very wishful right now.

AN: So Ubbe (Luke Shanahan) and Hvitserk (Stephen Rockett) are with papa Ragnar, why on earth did he bring the younger one?

EE: I think just to get them away from Aslaug’s influence. He knows that he can’t get away with taking the younger ones but in his mind, he wants them away from her, her influence and in Aslaug, is a woman who is fearful of her religion dying before her and she represents the old world and old way of thinking.

AN: Good insight, she is such a toxic old Norse stick in the mud. Why did Ecbert send Aethelwulf and his “son” Alfred to Rome, what is his end game here?

EE: This feels like Michael Hirst drawing parallels across the kingdoms. By taking Aethelwulf away, the one threat to him is taken out of the picture. He only cares about the children of Arthelstan and Ragnar, he’s made no secret of that.

AN: This explains why Aethelwulf always looks sullen. How predictable is Count Odo? His whole Iago schtick. I’m really bored with him, Therese, their chain me whip me crap. This leg of the story needs to improve or just be guillotined. Je suis fatigue n’est ce pas?

EE: Yeah he’s run his course and I hope he tried to get on the battlefront in the faces of the Lothbroks. His comeuppance is on the horizon.

AN: We can only hope for that. How on earth did Yidu windup with a Vidal Sassoon haircut?

EE: Maybe the rats finished what Ragnar started by gnawing off her split ends?

AN: No that haircut is a bit too au courant for this tale in my opinion. Torvi should tell Bjorn what Erlendur said. Or kill Erlendur herself. That threat – seriously as a parent I would make sure a poison mushroom got into Erlendur’s stew.

EE: I think Torvi killing Erlender would be loads more interesting personally. It seems like it’s been building up inside her but Bjorn or the threat of losing Bjorn as a lover or her son because of Erlender could be enough to push her over the edge.

AN: She’s not a shieldmaiden so I hope my poison mushroom idea works, but let’s talk about the Ragnar and Lagertha heart-to-heart. She essentially told him to f_K off as he is not her husband, and you can see Ragnar’s sense of loss and regret here.

EE: I think she’s angry about what it is that he’s bringing up because Ragnar is only figging for information, not true empathy. He’s had many times to treat her on an equal level but has subconsciously or consciously kept her at only a certain level.

AN: You don’t miss your water til the well runs dry. I feel like this do-over for Paris is under a much more depressive circumstance and the players are far less trustworthy.

Ragnar cannot feel good about fight alongside Floki, Harald and their gang. At least he has Lagertha and Bjorn near, but then Rollo’s betrayal too is just putting such a heavy vibe on this whole mission.

EE: He [Ragnar] didn’t expect to be facing a blood relative in this battle, he’s already there because of surmounting pressure and now he has to decide whether to slay his brother too? I think that’s why he drifts off into a daydream about his old life when it was much simpler.

AN: I am not enjoying the leaden pacing of the stories in Wessex and Paris. if they are planning 20 more episodes, some major change needs to happen and I believe it will revolve around Bjorn and the brothers.

EE: That’s the thing, we’ve had a lot of near misses and the casualties have been for the most part on the outer ring but I don’t think we can get away with another close call. But there’s also history to be conscious of…

AN: True and history says that Ivar is the one who really will turn heads too. Is Harbard Odin? Ivar is freaking me out, he has scary children of the corn teeth. Notice how Aslaug’s kids are red heads too?

EE: Hah, yeah he’s the Norwegian Damien Thorn. Seriously, the kid creeps me out too and once his head starts spinning around on a swivel I’m out of here!