Teen Mom 2 fans criticized Kailyn Lowry for taking her children on a trip to Texas amid the current pandemic and for allowing Lux to run maskless on the plane.

In her Instagram stories, Kail posted about their trip and included a video of Lux dancing and playing in the aisles near other people.

A fan who works in healthcare commented on her decision to travel to a state with a high infection rate and said, “🤦‍♀️ that’s all I can say coming from [a] Nurse . I understand it’s the holidays . Just please be safe there is this nasty virus going around and you just brought your family [to the] number 2 state.”

Another didn’t approve of her traveling with her youngest son Creed, 4 months, and said, “That’s pretty stupid to do with a newborn.”

"Y’all are out of pocket,” Briana recently tweeted. Added Jade, "Y’all want me to ...

According to The Sun, a critic on Reddit was unhappy to see Lux without a mask and said, “Where’s your newborn??!? Why take a toddler anywhere?! And he’s running wild on the plane?” 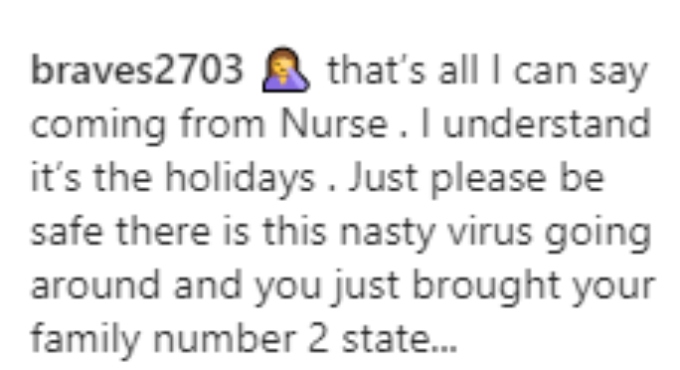 Kail’s trip to Texas comes following the most recent episode of Teen Mom 2 when she had to cancel their family trip to the Bahamas.  The episode was filmed during the onset of the pandemic.

Kail sat down with her friend and explained her desire to get away with her three sons Isaac, Lincoln, and Lux before they became a family of five.  At the time, Kail said that she felt people were making a big deal about the pandemic and joked that she would sue everyone if her vacation got ruined.

When Kail had to break the news to her sons that the trip had been canceled, they appeared extremely disappointed and were wondering when the next opportunity to go away would be.  Kail explained they would have to wait until after the baby was born.

Kail’s trip to Texas comes amid recent legal issues that manifested as a result of her arrest back in September.

Kail is due in court in January to face charges after she allegedly hit baby daddy Chris Lopez during an altercation.  Despite the charges, Kail filed a petition for full custody of their sons Lux and Creed.

Kail was granted sole custody of the boys while she awaits her hearing.  From his Instagram posts, it appears that Chris has continued to spend time with his sons amid the custody battle.

Chris has yet to comment on Lux playing in the aisles of the airplane without a mask.  The current season of Teen Mom 2 documents Kail and her co-stars as they navigate living under the new health and safety guidelines of the pandemic.