90 Day Fiancé alum Larissa Dos Santos Lima went on a profanity-laced rant against Evelin Villegas as she cleared the air about a meeting she had with Evelin’s boyfriend Corey Rathgeber.

The former 90 Day Fiance star later apologized for the Instagram story, which has since been deleted.

Corey and Evelin were introduced to 90 Day Fiance fans on the first season of The Other Way. Corey moved to Ecuador to be with Evelin and has lived there since then.

As for the drama with Larissa, the Brazilian OnlyFans model claimed that Corey wanted to meet with her last year in October when she was single and asked her to fly out to Arizona. However, Lima said that he should make the commute and denied sleeping with him.

She “ruined my life, and she ran over her dog.” Uncle Beau is making some more accusations about...

They eventually met in Las Vegas and took a photo together, which reportedly triggered Evelin’s attacks on her. As previously reported, Corey also denied anything happened between them in the meeting, although Larissa’s then-roommate described it as a date.

During the long Instagram rant, the Brazilian reality TV star accused Evelin of bullying and creating a fake storyline for 90 Day Fiance.

“Why is that b**ch Evelin still talking about me? No matter how much I have ignored her, she continues to act butt hurt. Evelin, sweetheart, why don’t you talk to the producers to create a fake storyline? Throw in some truth, like how you were deported for working illegally,” Larissa said in the video, which was captured by the Instagram account @Laricristinalimafans.

Lima added context to the accusation, stating, “First of all, who do you think you are with this fake hate about the United States, pretending you don’t want to live here, when in fact Corey told me you can’t because you were deported for overstay working illegally as a babysitter!! For how much longer do you want to lie to your fans?”

Evelin responded by poking fun at Larissa’s cosmetic surgery and comparing her to Michael Jackson, which she had done before when asked if she ever had lip filler.

Larissa apologized to her fans

After deleting the Instagram Story, Larissa apologized to her fans and followers for her “low-grade” comments about Evelin, adding that she had a responsibility with her platform as she prepares to go under the knife for more cosmetic surgery. 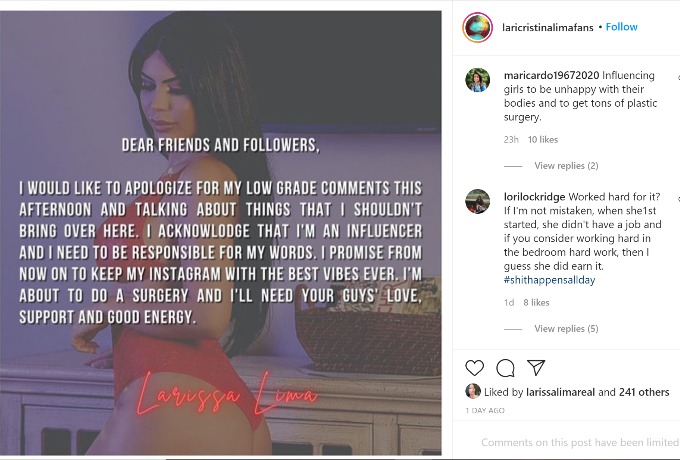 Despite all the drama, it appears that Corey and Evelin are still together despite their rough patches. Although the couple has been accused of lying about their marital status, Evelin confirmed they were in quarantine together.

90 Day Fiance: Happily Ever After? is currently on hiatus from TLC.