Bachelor in Paradise star Blake Horstmann revealed why he turned down the opportunity to return for the upcoming season.

Blake stirred up a considerable amount of drama when he was last on Bachelor in Paradise.

In fact, producers even voiced they were hoping to cast him again this year.

He was uncertain, and after some deliberation, turned down a spot on Bachelor in Paradise.

Blake opened up when a fan asked why he didn’t end up going to Paradise again.

“Ya know it was close. I went through some testing etc. But at the end of the day I didn’t feel it was right for me,” Blake wrote on his Instagram story during a Q&A.

He shared that he’s happy with where his life is right now, which influenced his decision.

Blake expressed he backed out because he wasn’t ready “to go back to an environment that breeds toxicity and emotional abuse.”

He implied that he didn’t want producers to use him for another story while throwing some shade at the franchise.

He concluded, “I decided my mental health was more important than some followers and engagement.” 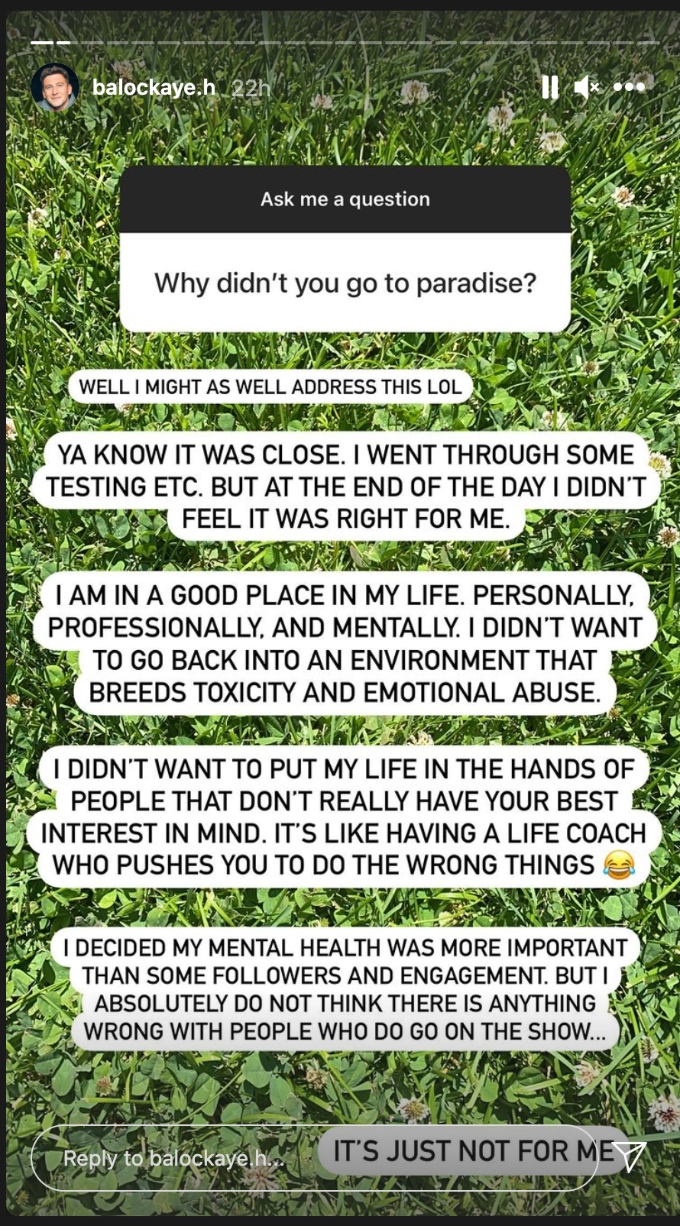 Blake wasn’t into the contestants from Matt James’s season

Blake initially said he wasn’t interested in returning to Bachelor in Paradise because of the most recent season of The Bachelor.

He expressed on Us Weekly’s Here for The Right Reasons podcast that, based on how the show edited the women on Matt James’s season of The Bachelor, he wouldn’t be interested in dating them on the summer spinoff series.

“Everybody always asks me, ‘Would you consider Paradise [again]?’ And I’m like, honestly, these women, they don’t make them very likable,” he said.

Between the potential cast and looking out for his mental health, Blake had sound reasons for not wanting to be on Bachelor in Paradise.

Blake’s history on Bachelor in Paradise

Blake doesn’t have a good history on Bachelor in Paradise.

While Blake was a fan favorite on Becca Kufrin’s season of The Bachelorette, he became a villain on Bachelor in Paradise.

Blake pursued Caelynn Miller-Keyes and Kristina Schulman within days of each other at the Stagecoach Festival.

Blake didn’t seem interested in pursuing Caelynn in Paradise, so she shared their Stagecoach experience.

While he still tried to pursue a relationship with Kristina, his two-timing nature shot his chance of love in Paradise in the foot.

In retaliation, Blake leaked text messages between him and Caelynn. He received backlash but stands by his decision.

Bachelor in Paradise returns to ABC on Monday, August 16 at 8/7c.