It might be egg-frying hot in your neighborhood, but the return HBO’s epic Game of Thrones with the Season 7 opener created a chill in the bones.

It saw nearly every major character reintroduced and reinvigorated to either usurp or prepare for the encroaching Undead Army.

Those that knew about it at least!

That knowledge seemed to be the divider — those characters who understand the real threat coming for them and those who haven’t a clue.

Season 7 is the moment we have been building up to, the clash of houses, queens, the living and the dead.

We witnessed a clever mass poisoning, a change of heart, a shocking amount of feces, sibling rivalry, loads of fancy ships, a new Euron, and a homecoming.

Here are our seven top moments from Season 7 Episode 1, Dragonstone:

The cold open took us back to the Westeros’ biggest misogynist and crap host, Walder Frey.

A feast was summoned, wine was poured and all were jolly until the wine toast was made and after sufficient sips of it, Frey lambasted his Frey kin for being such brutal hosts at the Red Wedding.

We know Arya is a top graduate of the Faceless Men school, ergo the ruse.

A mass poisoning hasn’t been this much fun since The Witches film. Kudos to actor David Bradley whose odious Walder Frey was perfectly off-kilter, giving us a clue that it was indeed Arya pulling a fast one.

“Tell them the North remembers,” Arya told a sole surviving wife of Frey.

2 The Citadel of poo hell

Poor Samwell Tarly wandered into a medieval version of eye-popping TV show Embarrassing Bodies in the Citadel, which harbors the largest library in the world.

It also has the biggest collection of chamber pots that double duty, it seems, as soup bowls.

Not only is being an intern a tough and dirty business, the camera department lovingly zoomed into each collected chamber pot so we could marvel at the variety of each Maester’s poo which Sam was tasked with dispatching.

The montage was enough to put you off eating for a long time.

Meanwhile, Samwell also could not convince these gas bags that the Army of the Undead is coming and that he saw them up close.

3 The Undead Army has giants and all sorts in the mix!

These giants and the tusked mastodons just freak me out. They add a whole new dimension to the mayhem the Night King promises, and that fog-enshrouded scene after Arya’s Frey-ticide was eerie, beautifully lensed and made me ice cold with fear.

Bran’s entrance into the Knight’s of The Wall’s enclosure further cemented this chilling moment. “He’s coming for us, for all of us,” Bran said. Indeed, hide under the blankie!

The moment where the Northerners were amassed at casa Stark by Snow to plan the attack against the Army of the Undead was a classic Godfather scene, with Michael (Snow) criticizing Freddo (Sansa) for unwisely arguing family business in front of outsiders.

They eventually made peace but this scene made Sansa look brittle and unwise, and Snow came out looking heroic in salvaging the former loyal Stark bannermen of House Umber and House Karstark.

“You need to be smarter than father and Rob, they made stupid mistakes and they lost their heads for it,” counseled Sansa Stark before Cersei’s nasty-gram raven was delivered.

5 Cersei on steroids, no good can come from it: Enter ‘two good hands’ Euron

With quiet and steady diction, our Cersei painted a giant map to see where all her enemies lie in the Westeros.

She told Jamie of the enemies to the east, west, north, and south. Jamie reminded her the kids are dead and was visibly grieving Tommen, who killed himself. “He betrayed me,” said mom of poor Tommen!

Cersei’s embittered resolve will be problematic, especially if she warms up to the charmer from the Iron Islands, Mr. new and improved Euron Greyjoy, a Russell Brand meets Piratey Johnny Depp version who gives no f**** except to create chaos and WIN whatever that means at the moment.

He sensed the opportunity and appears to dig Cersei while he totally shaded Jamie with his “two good hands” remark.

Euron knows she’s the ticket to catapult into some fame and fortune. But Cersei was on to him until he said something quite interesting. Euron, emboldened, offered to deliver Cersei a gift. Me thinks it is the head of Tyrion Lannister.

You knew it was coming. Sandor Clegane has softened. His crimes came back to haunt him as the father-daughter duo he robbed died of starvation.

Finding refuge from the storm, The Hound buried them after Dondarrion and Thoros showed him a vision in the light of the fire.

Clegane is a notorious atheist, yet in the flickering flames he was enlightened and saw the coming chaos with the Undead Army.

His remorse bubbled up and we saw he is no longer the hard-hearted brute that he was made to be by his cruel brother, The Mountain, who serves as Cersei’s bodyguard still.

7 No place like home: Dany and the dragons return in grand fashion

The episode’s final scene saw Daenerys Stormborn of the House Targaryen, First of Her Name, the Unburnt, Queen of the Andals and the First Men, Khaleesi of the Great Grass Sea, Breaker of Chains, and Mother of Dragons, home in Dragonstone.

Remember that Robert Baratheon had given Stannis rule over Dragonstone as a reward for taking it during Robert’s Rebellion.

Now with Stannis dead and the island unmanned, the legacy of Aegon Targaryen and his family’s dragons (the first ruler of the Seven Kingdoms) is Daenerys’ perch to enact a campaign to reclaim the Iron Throne, and we hope she will unite forces with Jon Snow to defeat the Undead Army.

The undoing of Littlefinger’s importance? Brienne’s remark to Sansa of “what is he still doing here” summed it up.

No one wants this guy around, Sansa even sees what a manipulative jerk he is and dismissed him in the scene depicted above.

It seems Littlefinger’s usefulness has expired. Will he go gently into that goodnight? That’s the mystery. 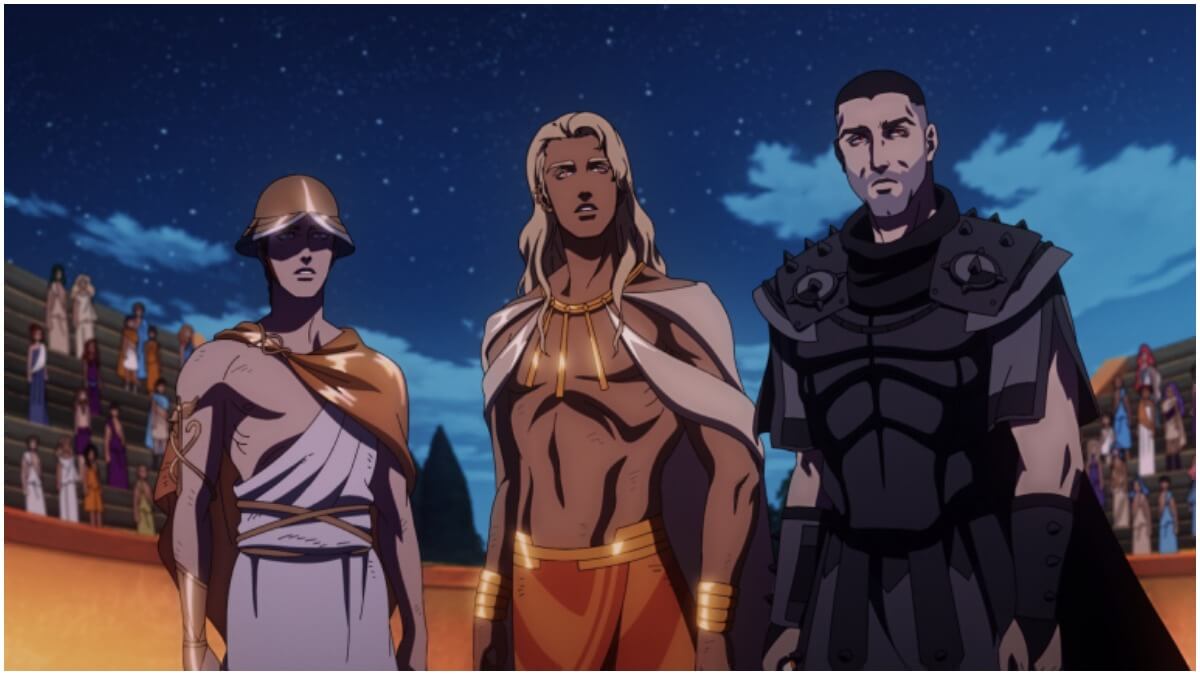 Blood of Zeus Season 2 release date and cast latest: When is it coming out?
RELATED POSTS