The finale of Alaska: The Last Frontier has a gripping conclusion that will answer a lot of the buzz going about on the Internet, specifically ones related to Atz Lee Kilcher’s marital rumors.

Their toughest decision leaves Atz Lee and Jane Kilcher at a crossroads. So much so that Jane Kilcher posted a telling Facebook post where she lambasts Internet trolls and how show producers cannot possibly capture all that they endure: 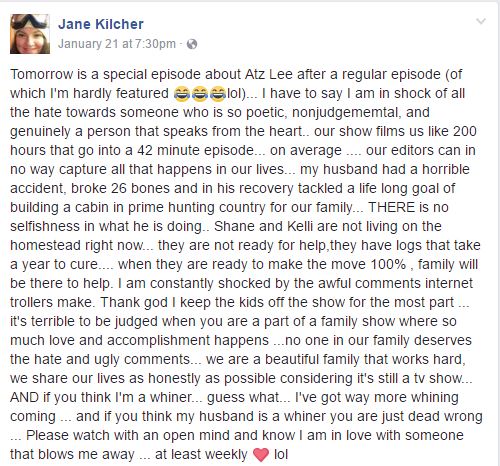 In the clip below, it opens with Jane and Atz Lee talking about their future.

Atz Lee tells her: “My perfect vision is having you and the kids and everybody out here, the whole damn family…”

But Jane says in an interview with producers: “I’m not going to stay, so, he really needs to come home, or else I guess I’ll live it up without him, ’cause I will.”

“It’s a little nerve-racking,” says Kelli, diagnosed over a year ago with Multiple Sclerosis.

“We don’t really know what’s going on in her nervous system,” says Shane who is visibly nervous about his wife’s condition.

Out on a boat, Eiven Kilcher and Eve Kilcher make strides to improve the future of their family. Eiven has baby making eyes aimed at Eve and says: “We gotta couple of great kids, you never know, maybe next year we’ll just have one more…”

Also, the cold and workload of living out in the Alaska sticks are getting to Otto Kilcher and Charlotte Kilcher. The final moment in our clip shows these two have reached the end of their relationship rope.

Otto screams at Charlotte: “Just keeps working at back end!”

Charlotte isn’t having it and rides off saying: “If you’re going to do that to me I’m getting off of this horse, I’m done being your cowgirl I’m sick of this sh**.”

We also got a bonus exclusive clip, conflict with the cattle: