Netflix has perfected its own brand of fantasy series and created some TV shows that are better than those seen on network or cable television.

On top of that, the streaming giant has picked up licenses for television shows from other networks, allowing fans to catch up on them or binge from start to finish.

From superheroes and science fiction to monsters and medieval action, there is something here for everyone.

Here is a look at the best fantasy shows on Netflix as of August 2021.

Updated in August 2021: Every month series come and go from Netflix, and that can make it hard to keep up with the best offerings as far as current original shows.

However, more new series arrives all the time and we will add new great ones as they come to this list.

Based on the comic books of the same name, Wynonna Earp follows a descendent of legendary lawman Wyatt Earp.

However, this is not simply a western, as this horror series has Wynonna Earp battling undead revenants of her dad’s legendary enemies. With her in this fight is the seemingly immortal Doc Holliday.

There were four seasons of the show released on Syfy, with the last half of Season 4 hitting in 2021. Fans on Netflix can catch up on all the episodes in the first three seasons. The fourth should arrive soon.

Sweet Tooth is a new addition to Netflix, based on comic books by Jeff Lemire.

The series starts after a disease wiped out most of humanity at the same time hybrid human/animal children were born. Survivors blamed hybrids and began hunting and killing the children.

Gus is the primary character, a deer/human hybrid, and possibly the first of them all. After his dad dies, a man named Jepperd worked to protect him.

The two meet other hybrid children, and they rise against the hunters trying to kill them, trying to start a new world for them all to live in.

Based on the popular trilogy of novels by Leigh Bardugo, Shadow and Bone is part of her Grisaverse novels.

Jessica Mei Li stars in the series as Alina Starkov, an orphan who is also a Sun Summoner, although she doesn’t know her importance to the world at the start of the story.

In the first season, which hit Netflix in 2021, Alina meets General Kirigan, who brings her in to help him save their war-torn world plagued by the Shadow Fold. However, his intentions might not be as pure as Alina hoped.

There is a good chance the series will get multiple seasons, as the first was hugely popular on the streaming service.

Fate: The Winx Saga premiered on Netflix, bringing the beloved Nickelodeon show back to life in a live-action version.

In Fate: The Winx Saga, a fire fairy named Bloom enrolls at a magical boarding school Alfea College in the Otherworld.

She becomes friends with Stella (a light fairy), Musa (a mind fairy), Terra (an Earth fairy) and Aisha (a water fairy). It was here that Bloom began to learn about her past.

However, she had to grow up fast when ancient creatures called the Burned Ones attacked the campus, and Bloom might be who is needed to save the Otherworld.

The series was renewed already for a second season.

Supernatural finally finished up its 15-season run in 2020 and along the way created 327 episodes of action in a series where humans battled angels, demons, and monsters.

Jensen Ackles and Jared Padalecki star as Dean and Sam Winchester, a pair of demon hunters who started out trying to find the demon that killed their mother and ended up in a giant battle between good and evil.

What really made the show stand out was that the good and evil was never clear, as Heaven and Hell were both pretty bad and the boys’ only goal was to protect the innocents on Earth from the raging wars.

Penny Dreadful was a series named after the old horror novels that used to sell for a penny. The series was a true love letter to these horror icons.

Eva Green stars as Vanessa Ives, a woman who is a powerful figure, fighting the forces from the underworld. By her side are some of the most iconic characters from classic horror and fantasy literature.

The series had three seasons and 27 total episodes.

This means there are now nine seasons of American Horror Story on the streaming service, and there is enough here to scare, horrify, and disgust horror fans of all types.

Produced by Ryan Murphy, there are now 103 episodes to view on Netflix, from haunted house stories to freak shows to cult and witch tales, to a classic ’80s slasher movie with demonic spirits.

As the title suggests, Van Helsing is about vampire hunters. Kelly Overton plays a descendant of Abraham Van Helsing, the vampire-hunting professor first introduced to audiences in the classic horror novel Dracula.

In the series, which initially aired on SyFy, Van Helsing woke from a coma to find that the world had turned into a post-apocalyptic mess with vampires overrunning humanity.

Van Helsing has to build an army and work with a group of rebels to save humanity from the vampire threat.

There were four seasons and 52 episodes made of the series; subscribers of Netflix have access to the first three seasons, with the fourth coming soon. There is also a fifth season in the works.

Outlander is one of the most beloved current fantasy shows on television and is the highest-rated Starz original based on viewers.

The show, based on the novel series by Diana Gabaldon, is about a woman from 1945 who travels back in time to 1743. It is here that Claire joins a rebellion of Highlanders and falls in love with Jamie Fraser.

The series is still running, and there have been five seasons with 67 episodes, as the story goes through the two timelines, and there is a sixth season in the works.

Netflix only has the first three seasons of the show available to stream.

The Umbrella Academy is yet another Netflix fantasy series based on a comic book. In this case, the book was authored by Gerard Way and Gabriel Bá.

Fans might recognize Way as the lead singer of the alternative rock band My Chemical Romance.

The Umbrella Academy is about a group of seven superpowered children who were taken in and trained from the moment they were born.

By the time the children are grown, one has died, and another disappeared. When the missing member of the group returns and says the world is about to end, the team has to reunite and work together to save the planet.

Locke & Key is an original Netflix fantasy series that is based on the comic books by Joe Hill, who is Stephen King’s son.

Locke & Key tells the story of the Locke family after the patriarch is killed by one of his students. The family moves into the iconic Key House, but soon the three children learn that the house is full of secrets.

There are keys that can open doors that lead to great powers or unexpected places. However, there is also a demon under the house that wants the keys for herself.

Fox canceled the fantasy series Lucifer after it produced three seasons, but Netflix moved in to save the series.

The streaming service renewed the series for a fourth and later fifth season. The first half of the fifth season hit in 2020, and fans have a sixth and final season to look forward to.

Lucifer was based on the comic book series Sandman by Neil Gaiman, but it has turned into a comic of its own. The series follows Lucifer as he leaves Hell and opens a piano bar in Los Angeles where he helps a local police officer solve criminal cases. 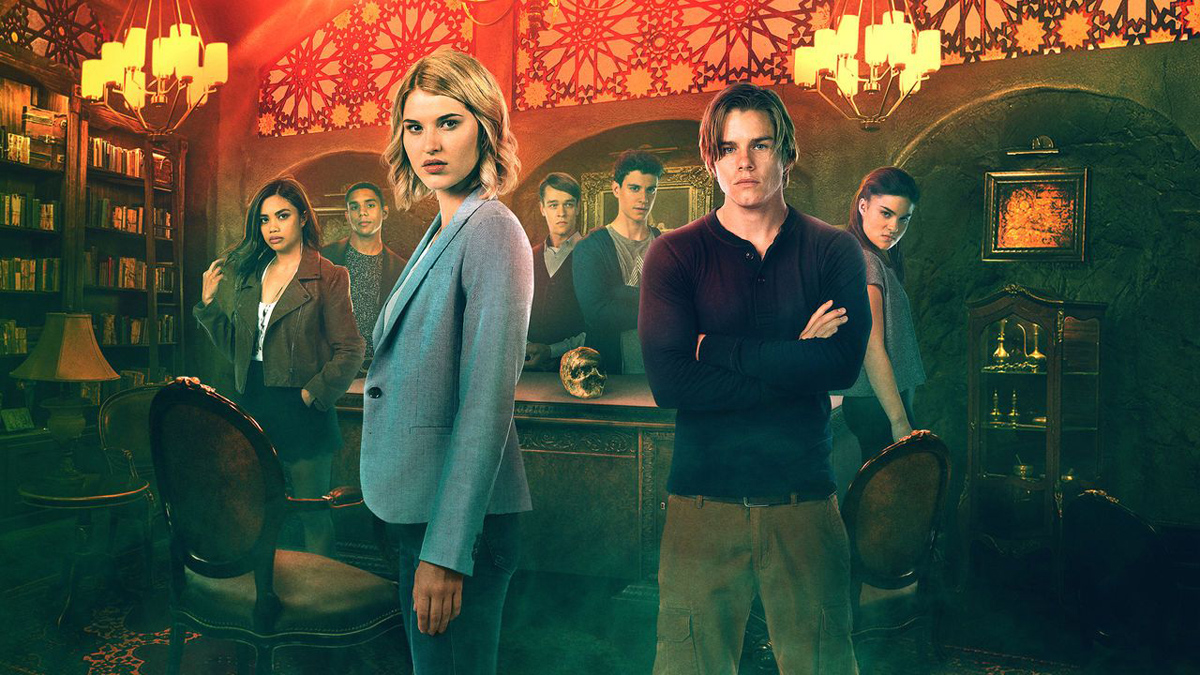 The cast of the fantasy series The Order. Pic credit: NetflixThe Order is a Netflix original fantasy series that premiered in 2019 and just released its second season in June.

In the series, Jake Manley stars as Jack Morton, a freshman at college who decides to join the Hermetic Order of the Blue Rose and the Knights of Saint Christopher.

The secret society teaches magic and has a dark history that includes connections to Jack’s family. As Jack delves into the secret world, he discovers that a conflict between magical dark arts users and werewolves has been brewing.

The first two seasons include 20 episodes.

Based on the Polish novels of the same name and the video game series that adapted the novels, The Witcher is one of the most successful new Netflix original fantasy series.

Henry Cavill (Man of Steel) stars in the series as Geralt of Rivia, a monster hunter with magical powers who is known as a witcher.

The story flips between three different time frames, with Geralt’s present, the past with a sorceress named Yennefer, and the future with a child princess named Ciri. The series connects the three stories.

The first season had eight episodes, and a second season, rumored to hit in 2021, is in the works.

Stranger Things is the most successful Netflix original fantasy series to hit the streaming giant.

The fans love the ’80s atmosphere, which includes plenty of references to icons of the time like Stephen King and Steven Spielberg.

When a girl named Eleven shows up in town, she meets a group of friends, and they end up teaming up to battle a mysterious organization as well as a creature that lives under the world itself.

There have been three seasons on Netflix with 25 total episodes, and a fourth and fifth season are still to come. Those seasons will conclude the story.

Dark is a Netflix original fantasy series from Germany about time travel, wormholes, and a whole lot of confusion.

This sounds confusing, and it can be, which is why fans have to start with episode one and work their way through. The story offers parallel realities, and the characters play different versions of themselves in each timeline.

The Chilling Adventures of Sabrina was supposed to be a spin-off series from Riverdale, but when The CW passed on it, Netflix picked it up.

It was a smart decision by Netflix, as the supernatural fantasy series turned out to be a huge success.

Based on the Archie Comics character of Sabrina the Teenage Witch, the series brings Sabrina to the point in her life where she has to accept her destiny.

This is almost a modern-day Buffy the Vampire Slayer, but if Buffy was a witch. There have been two seasons (three parts) and 28 episodes. The second half of season two has not yet been released.