Spencer Boldman, a young actor from Dallas Texas plays Jackson in Disney’s latest original TV movie Zapped.  Best known for his long running role in the ensemble comedy Lab Rats, Boldman plays the male lead in Zapped, a brain, a philosopher, a reader and a bit of a sensitive loner.  He’s interested in Zoey (Zendaya) a sassy highschooler who discovers that she can control those annoying boys at high school with her “zapped” smartphone. She gets satisfaction from zapping the football team into performing kick lines, bark like dogs, and worse because they give her a hard time.  But Jackson lets her know what she’s doing isn’t right and she sees that he’s a decent guy et voila – romance.  Jackson’s different and he’s someone Zoey can talk to, it’s the start of a beautiful friendship. We spoke with Boldman in Toronto. 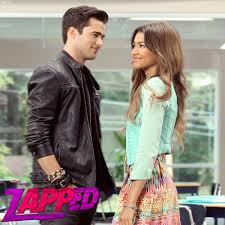 The premise is that Zoey magically gets an app that allows her to control men.  And then you become her conscience and give it to her straight.

It was cool because for that scene we hadn’t known each other for that long but we hung out a bit. That’s what I liked about Jackson is that he is honest and real enough to shoot straight with people especially Erica.  He thought she was one way and she isn’t and he lets her know.  He is honest and even though they didn’t know each other, it happens.  It’s the only scene in the movie where it gets real.  She and I had a lot of fun filming that energy and flow and the director let us do things with it.  It’s my favourite scene in the movie and I remember how I felt, it was a real moment, and I was excited about it.  There’s anxiety.  You want to get it right and afraid you’re not. That’s when you rely on the actors and director to help you out, so you know you’re doing a good job.

Jackson is a welcome relief from the supposedly unenlightened males at Zoey’s school.  He’s smart and mature, a good guy.   Was it fun playing that?

I was pumped because he’s so different from anything I’ve done on Lab Rats and I was attracted to that aspect of it.  It was cool, it was nice.  He looks like the bad guy but he isn’t, he’s a good person and he helps Zoey who is stuck in social media and helps bring her out of it.  And he doesn’t try to take advantage of her.  When her plan backfires, he can help her.  It’s cool to have played him.

Good-looking guys in film are sometimes portrayed as not smart in teen movies.

That attracted me so much for Zapped. The character I play on Lab Rats is so much the complete opposite, he’s dumb and a jock and cool.  That’s why I’m excited for fans of the show to watch the movie and they’ve seen the stereotypical me and now I’m playing something different.

Jackson is a sensitive artistic guy. Do you relate?

He is always outside.  It’s very poetic and fun to do, I still do.  I like to read.  I turn my phone off and open a book.  I do relate to him.  I’ve always been fascinated with certain things.  I like to lie outside my place and look at space and talk about where we came from.  I have always have been in touch with a different feel, a lot of people that know or meet me don’t think I’d be like that.  Being an intellectual is a cool quality to have and people should put in movies and TV and acting.

You’ve done well with your career. It hasn’t taken long for you to amass a lot of roles.

I’m very blessed and I’m a perfectionist and for my generation, it’s all about instant gratification.  We want it now.  I’ve been under contract to Disney since I was 16 and I’m 21 now and they’ve let me do the work and experience other sets. There was a part in my career when I wanted everything at once, and I look back on it I’m so blessed to have gone through everything I’ve gone through as an actor.  Mentally it prepared me for future stuff, and to trust the unknown and my ability and that applies to anybody – in school, or college or a job to know if you work hard, you’re driven and a good person the universe will take care of you.  Good things have happened. Lab Rats just got picked up for a fourth season, at the same time, I’m creatively stimulated as an actor.  I steal characters I play on the show and I will take advantage of that and pursue roles as an adult.  And we were renewed around the time when everyone was getting cancelled; friends of mine lost their shows.  I’ve been so blessed.

Why did acting appeal to you?

I realised when I was very young that I wanted to act.  I was very interested in Paul Newman and Clint Eastman, westerns and Texas but I also loved Roman Holiday and The Philadelphia Story.  That’s my base stuff.  Older movies fascinated me, and I had a big imagination and wanted to be a bunch of different things like Tom Cruise.  I wanted to be a spy. Acting just came to me.  I knew one day I was going to do it.  I knew when I was eight and I started doing plays when I was 14 and it spawned.  And that’s my foundation.  I started film acting at 15 and my manager at 16 and a month later I was under contract to Disney.

What kind of adult roles would you like to play?

There are a lot.  A cowboy would be great, a mobster like in a Scorsese film.  The Godfather is my favourite film of all time.  I love acting and comedy but my heart is with drama and character driven stories and independent films, simple stories.  The characters and people you just fall in love with.  I’d love to do a big Disney film too like The Pirates of the Caribbean.  What a ride that would be!  The only thing is in heavily CGI films, who do you fall in love with?  A robot?  Obviously they’re entertaining but I prefer films that make you laugh and cry.

Queen Latifah: From the W.E.B. Du Bois Medal to turning into Ursula...

The World According to Jeff Goldblum: Here’s the scoop on the Disney+...

Tony Hale talks about his Toy Story 4 spinoff for Disney+ —...
Sign up for our TV newsletter!