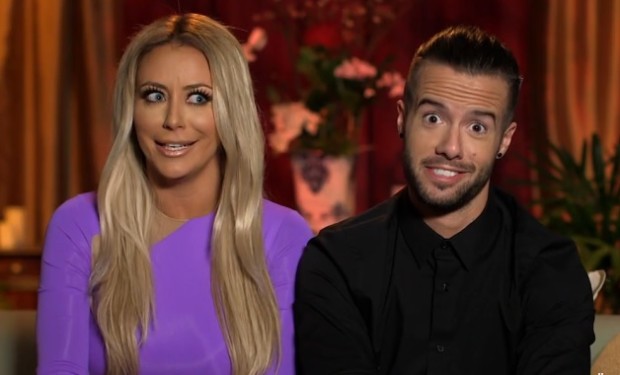 You know that friend who tells lies and everybody lets her get away with it, and then one day she gets called on the carpet for her bullshit and she totally melts down, hoping for sympathy? Yep, that’s Aubrey O’Day’s modus operandi for WEtv’s “Marriage Boot Camp.”

Oh yes, this lady can dish it out – and judge everybody – but God help anybody who questions her moral character. I mean, seriously, how dare they? Oh wait, they didn’t. She got busted by the official Marriage Boot Camp lie detector drill that’s always a favorite on the show.

So you cheated on Travis, Aubrey, just apologize and move on. Or apologize and split. But stop blaming everybody else in the entire free world for you growing up to become a selfish, narcissistic bitch.

For real, maybe her mother didn’t destroy her beauty crowns because she spilled a drink on the rug. Perhaps her mother thought the young lady needed to be knocked down a few pegs if she was going to be able to function as an adult. Doesn’t seem to have worked, but can you imagine her with a sash and crown? Pardon me while I throw up in my own mouth.

Someone close to the show told me that Aubrey spends all her time “playing the victim” and blaming everybody else for her problems. We all saw it this season. The girl I cheered for as she climbed the difficult road to success has turned into a horrible, arrogant person. And with the bad plastic surgery and the fact she is actually getting OLDER, she can’t play cute and naïve anymore. Nobody trusts her.

While this episode wasn’t all about Kendra and Hank for a change, they did kick things off. We see them making breakfast together and snarking.

“I don’t know the last time you said something positive to me,” Hank says when Kendra bitches about her scrambled eggs. Then they disappear to eat someplace while the rest of the crew gets together to talk about Hank and Kendra. Really folks, maybe paying a little more attention to your own relationships would help you.

With only 24 hours left in “Marriage Boot Camp,” the drill for the day is the famed lie detector test and nobody is excited. Except maybe Jeff and Jordan who are too boring to have lied about anything worth hearing about.

“There’s nowhere left to hide,” Marriage Boot Camp Director Elizabeth Carroll tells them as they’re split into groups to go be hooked up to the machines.

Did you watch the show before you signed up for it, Mike? You had to know this was coming before boot camp was over. I’m surprised he could participate given the fact he’s currently under indictment for a number of things.

I was not surprised when Hank called a time-out to consult his attorney before he took the test. All the questions Kendra has for him are about this incident with the transsexual that he claims he’ll be fighting in court. The attorney says no lie detector test and once again, Hank gets a free pass.

The way the show was edited it was a little tricky to catch everything happening with the lie detectors, so I’m going to try to break it down as easily as possible for you.

Hank didn’t take the test, but Kendra lied when she said she hasn’t been considering cheating on Hank. He’s not mad because he has no right to be. He did more than think about cheating.

Lauren wants to know if Mike trusts her. He says he does, but flunks. He doesn’t trust her. And that fine, because Lauren flunks the question about whether she’s cheated on Mike. When the answer comes back “deception indicated,” Lauren flips out.

Tami wants to know what happened in Vegas and whether Reggie has been unfaithful since they’ve been together. Reggie basically wants to know the same thing.

But as usual, Tami is more pissed that Hank can’t take the test than worried about her own life.

“I didn’t want to take it either,” Tami complains.

“I’m giving it 100 and I’m putting all my business out there, and I feel like you’re not doing the same,” Travis whines too.

Tami passes the lie detector with flying colors – “Boom,” she says. Reggie, not so much. Oops!

Jeff and Jordan’s questions are about where they’re going to live – and apparently Jordan lied about being able and willing to stick it out in Los Angeles with Jeff. Shocker!!! But still a snooze.

Aubrey doesn’t want to take the lie detector because she knows she’s going to flunk it and she can’t take it anymore. She thinks Travis chose his questions to hurt her. Maybe he did. And maybe that means you shouldn’t stay with him. Duh!

Weirdly, Aubrey turns into a nun in front of the polygraph tech. Pretty funny to watch. She didn’t resemble the freaked out chick – or the psychopath – we’ve seen. She was scary calm. Like she knew the tricks to fool the machine and was trying to use all of them at once. Didn’t work.

Before they’ve even get their test results back, Aubrey is totally melting down. It’s not pretty.

“This is you, once again, making our whole fucking relationship about you. I told you do not put me situations anymore where I have to defend my character,” Aubrey literally screams at the top of her voice. I think I missed a few f-bombs in there but you got the point.

“Aubrey is definitely losing it,” Kendra says when they hear the screaming coming from upstairs. It was really an unholy, exorcist-sort-of howling.

“You seem really upset for someone who’s innocent right now,” Travis says, following her as she runs out of the room. Go Travis – grow a pair! She’s running away from her big fat lies and you’re the only one who can choose to let her get away with it.

When they get the results, nobody is surprised. Travis told the truth when he said he wouldn’t choose Aubrey over his career.

Aubrey lied when she said she hasn’t cheated on Travis. She flips out like Lauren did when she got busted. But she takes it to a whole new level.

“It’s crazy,” Aubrey says. Save your breath. Nobody believes you.

They’re told that the next day they’ll have to decide if they should stay together and the group breaks up for the night. A few minutes later, Aubrey is storming through the house looking for Travis. Travis is hiding outside. Smart boy. He takes advantage of some one-on-one counseling with David until Aubrey literally hunts him down.

Aubrey’s a hot mess and running around in a bathrobe. During an evaluation discussion, the testers tell Jim and Elizabeth that Aubrey was calm and cool in the polygraph. Exactly what I said. Maybe she should try acting.

She’s also freaked that she and Travis got the lowest possible compatibility rating from the boot camp staff. A “ONE.” That’s gotta hurt. Truth usually does.

Aubrey’s melting down looking for Travis. She’s freaking. She hunts him down outside in a counseling session one-on-one with David.

“I have not been unfaithful,” she screams at him when she finally finds him. She’s got half the house hunting for poor Travis. David wants them to talk but Travis isn’t interested in talking to Aubrey anymore.

Jeff intercepts her as she’s headed back to the house and tries to talk Aubrey off the ledge but she looks freaking nuts. Her eyes are wild.

“Guess what? My relationship is over now,” Aubrey tells Jeff.

“I have had enough,” she yells as she slams the door on the cameras.

Marriage Boot Camp Co-Director Ilsa Norman’s trying to talk Aubrey off the ledge but the girl is too far gone. I was actually surprised they did sit down for a session with David.

Travis flat out accuses Aubrey of cheating and she gets hot fast.

“I have never cheated on you. I have not lied in this house… it’s been the hardest thing I’ve ever had to do,” Aubrey sobs. I guess it’s the first time she’s ever had to tell the truth.

“You are shady, Aubrey. With your behavior,” Travis is screaming about her phone and how she deletes all her texts. I agree with Travis. Totally shady behavior for a committed couple. And we’ve seen that cause huge problems in relationships before right here on this show.

“You’re a liar,” Travis says, and storms off into the house. Aubrey follows him hysterical. Travis asks the cameras for space. This is ironic and hypocritical after the way he’s acted about Hank and Kendra. Just sayin.

“I just want to go home. I just want to get the fuck out of here. I’m having an anxiety attack,” Aubrey is screaming to somebody on the telephone when Travis intervenes. Of course, she has to call her people. She just had a major nervous breakdown of sorts on national television and instead of hiding in her room and shutting her mouth, she’s acting like a crazy person.

Reggie and Tami got into it a little too after the lie detector results, but apparently, Reggie only fooled around during breaks when they were broken up.

At first, Tami didn’t seem to get pissed because she and Reggie have been on and off and that’s when he fooled around. They she gets serious.

“You wanna know how many?” Reggie thinks Tami is joking. She’s not.

Tami gets mad saying Reggie should have known they were going to get back together and therefore should not have cheated on her. Then she sorta flips out.

Reggie admits to two women. Kinda like all DUI suspects tell the cops they’ve only had two drinks. Tami’s no fool.

Next week, they have to decide to make up or break up in the final episode.

We know Hank and Kendra stay together because of all the promos for her new show “Kendra on Top,” and we know Tami got pregnant with Reggie and lost a baby this summer. She was probably preggers on the show, a la JWoww style.

Jordan and Jeff have no issues and Mike’s not going to dump Lauren regardless of how puffed up and pissy he was about not trusting her. The only wild card in the game is Aubrey and Travis’s relationship, and we all know what SHOULD happen there. But I’m dying to see what does.

I almost watched that second airing of the show with the cast members commenting but then I saw Aubrey, with her freaky new grey hair, and I decided I just couldn’t. I’ve seen enough of her temper tantrums in the last 11 episodes, thank you very much.

Michel’le and Stew can’t agree on morning kisses in this Marriage Boot...

LHHNY star Tahiry Jose accuses ex Joe Budden of abusing her during...
Sign up for our TV newsletter!