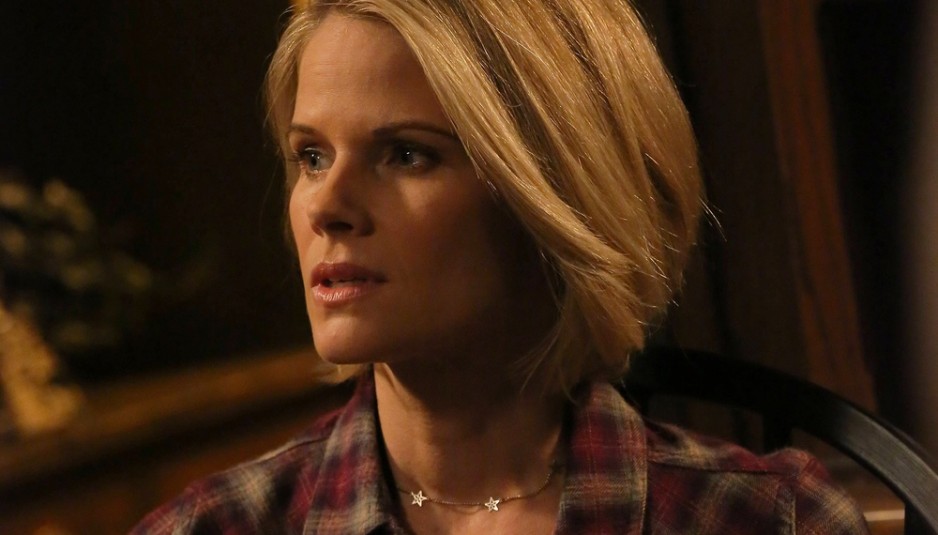 Ava went on the offensive in “Sounding,” driving this episode with her frustrated and poor mismanagement of the stress she’s feeling from Katharine Hale (Mary Steenburgen) and Boyd (Walton Goggins) in trying to be Raylan’s (Timothy Olyphant) criminal informant.

She’s pulling out all the stops, like seducing Boyd with her body and her cooking. She’s even doing lines of cocaine with one of the meanest women in the crime world (and grandmothers to boot). For the first time we get some honesty out of Ava in her conversation with Errol:

Understandably, she wants cash, and a new start out of the country. Her best bet is to follow through with her arrangement with Raylan and we now know that there is no hope for Boyd and Ava, despite him slipping her engagement ring back on her hand–a sad moment for shippers rooting for Boyd and Ava to pull off the victory at the end of the series.

Ava may have past the point of no return now thanks to this aggressive play.

But her kissing Raylan was a mild win for those who have been secretly rooting for their paths to cross again since she was dumped by our man in the Stetson.

We know Raylan isn’t devoted to Winona (Natalie Zea) or her confrontational personality. Yes, he wants to close the Crowder and RICO cases to be with his daughter, but not necessarily Winona. This arrangement has received no support from his superiors.

He’s secretly enjoying meeting Ava behind Boyd’s back but is showing his sadistic side in letting her twist in the wind, despite all of the danger she’s found herself in.

Ava can pick up on his chivalrous ways, but she is also scared and willing to do anything to come out of this as a survivor. She’s desperate with little else to bargain and her last bastion of hope to run from this situation, Limehouse, was a dead end. He’s basically ensuring her safety–a dangerous promise he can’t keep–and what woman couldn’t feel comfort in that?

As for Raylan’s side of the kiss, his weakness is helping women and perhaps he feels guilty for leading Ava down this path. He carried a fling with her in the first season, only to ditch her for another dead end with Winona, thus leaving Ava to find a new path, which eventually led to Boyd’s arms.

Raylan’s always felt she deserved better than Boyd, but couldn’t give her his commitment. Still, this is an interesting twist to their agreement and certainly a potential conflict of interest.

But his weakness to help a damsel in distress has left him vulnerable in the past and his macho act and cocky attitude could get him in trouble. Ava could end up playing him for a fool. We expect the season to end with Ava, Raylan and Boyd around the dinner table, but jealousy is only throwing fuel on the fire.

I am encouraged by the introduction of Ava’s uncle, Zachariah Randolph (Jeff Fahey) and the coal mines of Harlan county to give Boyd access to the vault through an adit of a sealed up mine.

This puts Boyd in his element of expertise. Sure, he wants to be an entrepreneur in the business of farming marijuana, but only to largely and legally capitalize on what little Harlan has to offer him. In his mind, it’s the opportunity to stay in Kentucky and give Ava the life she’s wanted, with him. One last big score before he tries to lead a straight life.

But what do we know about Boyd? Like Raylan, he started out working in the mines and he’s continued to use dynamite for robbing banks and other shady dealings. Whether it is Zachariah, Luther Kent, or even Mr. Handsome (Shawn Parsons), these are his associates and cronies who we are meeting and they know how to work in a mine shaft.

The episode’s title, “Sounding” is a mining term for a tool to help detect voids and hazardous spots. Even though he is put at a disadvantage, because of his inexperienced henchmen and the reputation of his family, this is the most at ease Boyd has been since Season 2. We also know that he knows how to use the word, “ameliorate.”

Will Zachariah remain an ally to Boyd, or will he ultimately help his niece and stab Boyd in the back as so many have done already?

“Sounding” was another episode where the writers Dave Andron and Leonard Chang utilized all of the supporting characters beautifully.

It’s not just about Raylan, Boyd, and Ava anymore; it’s the entire world of Justified that has been featured prominently this season and here we get to see Constable Bob (Patton Oswalt) shine the his badge again, Limehouse (Mykelti Williamson) dragged out of his kitchen, Albert Fekus (Danny Strong) survived a cattle prodding, Wynn’s bodyguard Mike (Jonathan Kowalsky) invents a new word, and Errol (Demetrius Grosse), one of my favorite characters from the past, sought redemption, though thwarted by the Constable.

I could continue on with the weekly dose of Gutterson, Rachel, Choo-Choo, Ty Walker and Katharine Hale, but while the meat, the lean protein of this season is undoubtedly Justified’s triumvirate of stars, it’s these supporting characters who once filled in the background that are giving the flavor to this season. There’s more gravitas and the bigger role of the background characters is no coincidence.
C’mon, who didn’t enjoy the sad sack that is Constable Bob, rehearsing how he would confront Errol in the hardware store while trying not to be distracted by Ava’s beauty?

We were lucky to get one line uttered by Mike each season and his clueless understanding of whether or not “aplex” was a word, might have been one of Justified’s funniest moments since Dewey thought he had four kidneys.

Not surprisingly, this season keeps getting better and something tells me that all the warm and fuzzy fun is about to end, for someone soon Someone is going to join poor Calhoun, and it will probably be an important player.

Next week, we’ll await to see what favorite supporting character will make his or her mark, but scenes for “Alive Day” reveal Raylan waiting for Boyd to come home, Limehouse offers up information to Boyd, Ava talks to her uncle and Raylan has his second bout with Avery Markham and that’s where we could see our next casualty.
Watch new episodes of Justified, Tuesday nights at 10pm ET/PT on FX.