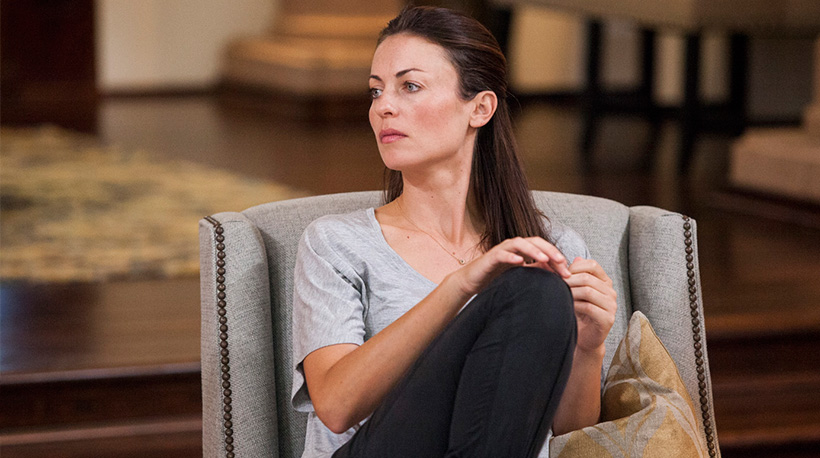 And tonight, ladies and gentlemen, WeTV’s “Marriage Boot Camp” treated us to a glimpse of what it would have looked like if Natalie had been on “The Hills.” And then as the night grew late and they all got drunk, we had a snapshot of how Heidi would have done on “Bad Girls Club.” It was absolutely terrifying.

Alright, this is going to read a little bit like a Housewives blog tonight, but that’s how it felt to watch it.

Natalie apparently thinks that by sticking up for Rachel in a previous conversation about her staying out too late and ignoring Tyson, that they now have an alliance. But nobody told Rachel this. So when they do the now-famous paintball drill where the campers get to shoot the crap out of their castmates they don’t like, Natalie doesn’t shoot Rachel. But Rachel shoots Natalie because she’s following the rules of the drill. Nat didn’t explain that out set of rules to her.

“Bitch, we supposed to be on the same team,” Natalie yells. “Can we do that over again cuz I’m coming for Rachel then.”

When Natalie goes off, Rachel looks stunned. She has this deer in headlights look that’s getting old but I don’t think it’s fake.

“Bitch are you crazy?” Natalie asks.

Rachel’s still trying to do the exercise, bless her little heart (and you know what that means), and has no clue that Natalie isn’t about the boot camp drill. It’s about loyalty. Respect. OMG I’m peeing my pants remembering how she freaked out.

Aviva and Reid making fun of Natalie’s ghetto-speak is funny. She turns it off and on whenever she wants. She speaks with perfect grammar the rest of the time.

Natalie cannot let it go. She rants and raves to Jacob in their bedroom before dinner and he’s trying to tell her to behave and it’s not working.

Natalie has some major issues with Rachel.

“Bitch, I’m coming for you. I’m about to turn this house upside down,” Natalie announces.

“This is not the bad girls club. This is Marriage Boot Camp…” Jacob says to her back because she’s already rolling out to go get her pound of flesh out of Rachel.

Natalie sits down to dinner and immediately tears into Rachel for being fake.

“I stayed up with her last night all night with her,” Natalie says. What is she talking about? We didn’t see that. What f**king alliance? Then again, Rachel was on “Survivor” and she could be playing this show like a game too.

When they all sit down for evaluations, s**t hits the fan! Natalie just goes off.

“I called Rachel a fake ass bitch because I feel like she’s fake as f**k… let me do an exercise… let me keep it 100… I feel like you robbed me of my experience today shooting the gun,” and as she’s ranting and raving, she storms upstairs and she throws the wedding gown from Rachel’s room over the railing.

“This is why we’re here,” Jake says. He’s embarrassed.

“After tonight, I can’t stand Natalie. If Rachel were like that, I’d sell her to the circus,” Tyson says. And the fun hasn’t even started yet.

Meanwhile, Heidi is gunning for Rachel too. And the thing is that she never gets smart sounding, but the more she drinks the braver she gets. And she starts telling everybody how it is. After evaluations, the #MeanGirls get together and it all goes downhill.

“Heidi and I get this bad girl itch in us to keep going tonight,” Natalie explains.

Heidi puts on the wedding gown prop from Natalie’s room. She thinks Rachel has been disrespectful to her because at one point during a drill Rachel told her that not everybody has to be “like Spencer and Heidi.” Um, she’s right. Wouldn’t want to be.

“I was triggered to ‘mean girls status’ and were we like let’s show her how to be a wife,” Heidi explains, as if that makes it alright. I sooo wish Heidi had been on a prior season when half of them weren’t married. She’d have gotten her ass beat. What a snotty little bitch.

“She’s never gonna wear it,” Heidi says as she puts on the dress.

“We decide to rub it in her face that we are wives,” Natalie brags. So mean.

Everybody is s**t faced and when the girls gang up on Rachel, she tries to go along with it.

“I’m pretty scared of Natalie at this point,” Rachel says, and I believe her.

Heidi goes off on Rachel for ignoring her and they drag Rachel off for “girl time.” I wouldn’t have gone with them in a million years. Rachel needs to get a f**king backbone. OMG.

So they’re all sitting on the floor of Rachel’s bedroom and telling her what’s wrong with her. Rachel tries to explain herself and the situation they’re all judging her for with Tyson. But Heidi won’t shut up and listen.

“Rachel you should just give up… Heidi is not going to stop,” even Natalie realizes her wingman is toast.

Heidi’s sobbing like a moron. “It’s like who are you. I’ve been there for you,” Heidi says.

Okay wait a minute, you guys have known each other for like 72 hours at this point. Is that how Heidi defines a deep and serious friendship? Get a freaking grip girl. Grow up!

Heidi is bragging about how long she’s been married and telling Rachel she needs to respect that.

“Rachel, check yourself honey,” she warns. Heidi is out of control and everybody knows it. Making a fool of herself. And she’s not pretty when she cries.

“At this point, Rachel was looking at us like who are these bitches? Why are these bitches in my room?” Syleena sounds sympathetic. She’s just sitting there watching the nonsense, but making sure it doesn’t escalate.

Then finally, Heidi goes too far and ticks off Syleena.

“She doesn’t have to respond to you mother****** because it’s none of our business,” Syleena finally loses it and tears into Heidi and the rest of the nosy bitches.

Then Rachel wimps out and apologizes for everything Heidi demands. It’s so ridiculous. I threw up in my own mouth a little bit.

“Heidi’s so gone and one eye is getting lazy,” Rachel explains that they were all so drunk she just wanted it to end and was pretty much willing to say or do whatever was necessary to get these women out of her bedroom.

“I felt like Rachel still needed to be attacked a little bit and so I got Heidi to do my dirty work,” Natalie brags to her husband. Wow. I am not impressed. A little sick maybe. Heidi can be so easily controlled – this should make for a really interesting rest of Boot Camp.

Or not, as the teasers for next week show Natalie threatening to beat Heidi’s “f**king ass” after the wife swap exercise.

Okay, so I’ve focused entirely on the stupid #MeanGirls drama and not really mentioned any of the rest of what went on at “Marriage Boot Camp” this week.

Here’s the thing – I think the directors got a lot out of the exercises because they revealed SO MUCH about the individuals going through their program. I’m not sure how much the campers got out of it though. Spencer is still treating it all like a joke. Tyson isn’t going to marry Rachel. And only a good divorce attorneys can help Aviva and Reid.

But God bless Jim and Elizabeth Carroll for trying.

Syleena and Kiwane continue to be the strongest and sanest pair there and he needs to communicate better. She jokes about how he thinks he says things that he only thinks and she never hears them. All married couples can related to feeling like that at times.

Natalie and Jacob’s relationship is a lot more volatile and during the medicine ball drill, things got heated.

“When people toss around blame, they don’t realize the negative effect it has on their partner and their relationship,” Director Jim Carroll says.

“Using heavy medicine balls adds tangible to the intangible,” Director Elizabeth Carroll explains why they’re throwing heavy balls at each other to represent their issues.

“I shouldn’t have to demand respect,” Jacob is still pissed at her.

“I’m just thinking this whole damn rack is the issues we’re working on,” Natalie means they have lots of problems.

“Your family started with all the drama in the first place Jacob… you’re always trying to blame me for everything,” Natalie yells. Oh wait, what’s this? His family doesn’t like their “Bad Girl” daughter in law. Verrry interesting.

“Don’t put your hands on me… throw your ass in the lake,” Jacob tells Natalie when she starts pushing and shoving at him.

“You make me so mad that I possibly can end up in jail,” Jacob tells her.

“I have a feeling that the verbal abuse he takes is way worse than what we see,” Director Ilsa Normal tells the other counselors. I’d bet she’s right.

Spencer and Heidi get ugly during the drill.

“I definitely don’t respect myself, and I don’t respect you and I don’t respect our marriage because I feel like we made so many bad decisions that I’m not ready to have kids right now,” Spencer yells at her when they’re fighting about money and children. I hate him, but I agree about them not being financially ready for children.

We find out that Reid’s family hates Aviva during the drill.

“Reid has the problem that I’m on social media and I’m the only taking the heat for public negativity,” Aviva says.

“Shut it off. Shut of the Internet and focus on our family,” Reid pleads.

“You need to learn to respect my family,” Reid says.

“It’s your responsibility to communicate with your family to make it better,” Aviva argues. I wonder why his family hates her. Bahaha!

“I can’t change them. I’m asking you just to roll with it,” Reid tells her. I want the back story on that one. Oh please tell me we’re going to get it on a future episode!

I’m going to stop here because if you didn’t see it, that much should make you want to catch a re-run this week. Seriously, Heidi acting all ghetto and drunk was priceless. It’s only a matter of time before VH-1 is making one of those child stars whose lives were destroyed stories about Speidi the couple.

Tuning in to see if Natalie can scare the s**t out of Heidi next week – there’s nothing better than watching hyenas turn on each other.