I almost decided not to blog the new season of “Marriage Boot Camp” on WEtv after attempting to sit through the “meet the couples” pre-show episodes.

It was all flashback footage of these awful Bridezillas and there was just too much yelling and screaming. First impression: the nut balls from last season’s boot camp weren’t crazy enough and so they went out and found some really caustic couples to up the ante.

Let’s do a quick rundown of the stars of this season – just in case you don’t remember them all from “Bridezillas” (I don’t, but I honestly have to avoid watching too much wedding reality television or I get stressed out by it – I have had some clients like that!). 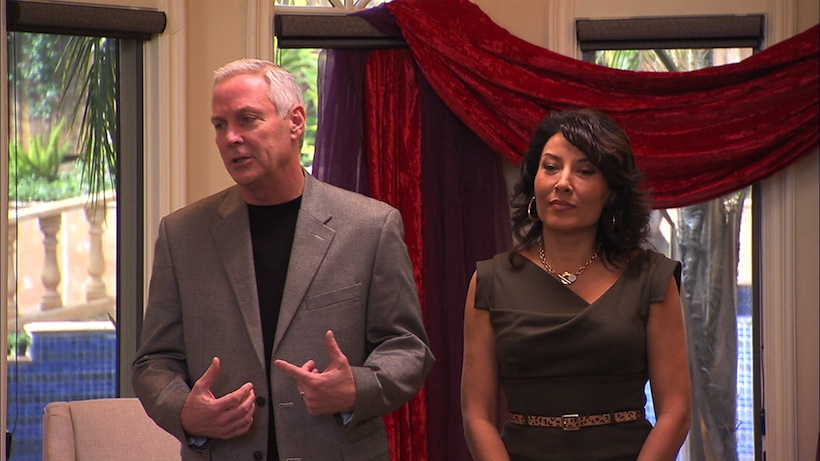 Sophia and Shawn have been married less than five months at the start of the show, causing some of their cast mates to make snarky remarks. I’m just trying to figure out if WEtv cast these people before they got back from their honeymoons. Sophia is whiny and Shawn is straight out of a bad “Jersey Shore” episode. Looking forward to the “’roid rage” scene they’ve been teasing because his utter freak out the first night does not bode well for his anger management skills.

Sophia admits in the first boot camp exercise that she’s afraid of her husband and his anger, and he seems totally baffled. Of course, this dude went straight for the bar upon arrival and proceeded to get s**tfaced and behave like an a**hole for a good part of the night. Another wife, Gloria, accused him of being a bully, and then they got into it. Guess who is going to be the furniture smasher this season? They should outfit these houses in disposable IKEA college furniture the way the “campers” behave.

Mai-lee and Tom have only been married for five months too, and they’ve got a lot of deep issues that have to do with his family – and her not forgiving and forgetting stuff from the past so that they can all have a relationship. I do not get the impression that she’s going to compromise on that unless forced. She seems really mean and he seems caught in the middle.

They are funny together though. In interview, Mai-lee says “I’m starting to think Shaun has a drinking problem.” Her husband cracks up and replies “Starting to think? Bahahaha.” I think he’s going to be one of my faves unless we find out he’s been beating her or their dog. Again, at five months of marriage, WEtv had to have cast this couple in boot camp before they even exchanged vows. Harsh.

Blanca and Julian are an interesting couple – although clearly unhappy together, they still work as a team. That’s how they won the contest swimming with bricks – or at least, that’s what Blanca wants everyone to believe when the truth is they only won because she cheated, repeatedly, throughout the event. In their eval, the “Marriage Boot Camp” directors, Jim and Elizabeth, pointed out that somebody who cheats in life doesn’t make a very good marriage partner. Blanca has no shame though.

She’s so judgmental about everyone else that you have to wonder if Blanca’s going to get anything out of this whole exercise. When the other couples arrived, she made fun of how they’d been married such a short period. “You just got married last week and you’re here?” Nevermind the fact that she and Julian have been married less than two years themselves – not a record impressive enough to brag about.

“This marriage is in trouble because of Julian, not because of me,” she says. “I think I’m perfect.” She’s not joking, btw. What’s sad is how her husband Julian describes her. “Blanca’s a hater…” and he says that everything has to be her way or the highway. “You know Blanca, let’s just get married so we can f**kin argue all day” he yells at her during one of the boot camp exercises. Well said, Julian. Well said.

When Tasha and Jeff arrived, everybody freaked because they’d all just been joking that they hoped the “pink” bride wouldn’t be part of the show. Guess what? Not only are they there, but Tasha has already filed for divorce and is mean, mean, mean. Of course, she’s married to the most ridiculous piece of milk toast I’ve ever seen. Does the guy have a personality?

Mai-lee said it best in interview. “Oh my God! Tasha and Jeff walked through that door and my heart just stopped. I thought they were divorced already.” So did Tasha. What made her decide to participate in this boot camp if she’s already filed and is just waiting for the paperwork to get the rubber stamp? A second career in reality TV? I don’t get the impression she feels anything – at all – for Jeff anymore. I’m not sure that Jeff feels anything… ever.

Tasha comes across as the truly vitriolic one here. Oh yes, she certainly did say the following in her pre-production interview: “I could care less about having sex with Jeff. Sometimes, ya know, he can’t even get it up.” Wow. No wonder, honey. You’ve scared that man’s weenie to death. And you’ve only been married 18 months.

We find out that one of the biggest things going on is this huge grudge she has against Jeff for leaving her alone at the hospital 30 minutes after she gave birth… to go to work. Unless the guy had a date to launch on the space shuttle, that’s a pretty lousy thing to do. But have you checked this guy out? His reactions do not seem normal and he doesn’t seem like he would do something like that maliciously. His reactions make me wonder if something is truly wired wrong.

I think Gloria and Mark are going to be the most interesting couple on the show. Not only is she bossy and ready to get into everybody’s business, but he’s got a nasty side too when provoked. We saw it when he shoved her over the “anger” brick argument. When all the couples arrived in their rooms to find the mean phrases they say to each other written all over the bedroom walls, Mark was the only one in the house who was happy about it. He thought it was great. I’m intrigued.

They’ve been married three and a half years, and so have more experience being married and more to lose if “Marriage Boot Camp” doesn’t help fix what ails them. Mark said it all when he made the joke he’d hoped they could get through one night without Gloria getting into a fight – he said that about the same time she got into it with meathead Shaun.

The camp directors called Gloria out during evals for being the only camper who felt the need to dive back into the pool and retrieve all the bricks. Gloria seemed proud of the fact she “always goes back to pick up the pieces,” until Jim asked her “can you not see there’s something broken with you?” He’s referring to her need to be in control and in charge and to prove a point all the time.

The season teasers show a lot of furniture being thrown, some domestic violence occurring, and to be honest, significantly more volatile drama than we saw last season. I really felt like all the couples last season were there because they were worried about their marriages – I’m not picking that up this time.

I think production or the network decided they needed more DRAMA and that’s what they’ve given us, but really, is using couples who have been married less than six months really appropriate? I wasn’t joking about how they probably chose these couples for boot camp while they were filming them for “Bridezillas.” With the timing, they’d have had to. While I respect the intent, I think they should have to be married longer than a year to participate in “Marriage Boot Camp.” I’d like to say longer than that, but then again, they might honestly be having trouble finding that many “Bridezillas” survivors who are still together.

This could be the reason for the twist in the next season – “Reality TV Marriage Boot Camp” featuring the Braxtons, RHOOC’s most annoying couple, and no-s**t JWoww and Roger. Here’s where I get confused – JWoww said a week ago in an interview that she won’t have her wedding til after she’s had the baby and lost the baby weight. So how could she and Roger possibly be slated to participate in the NEXT season of “Marriage Boot Camp?” Every season seems to feature at least one proud Guido/Guidette couple from the New York or New Jersey area, but couldn’t they at least find a married couple for this show?

Finally, was anybody else watching the show wanting to see a slider graphic at the bottom of the screen asking “HOW F**KING ANNOYING IS THIS STUPID GRAPHIC THAT IS BLOCKING THE BOTTOM HALF OF THE PICTURE?” I get the marketing strategy of trying to engage the viewer, but some of us would rather see the second half of the screen more than know if everybody else watching is rooting for the husband or wife in any particular disagreement. Please keep that in mind next week, WeTV. Or at least ask my question and let us vote on it.