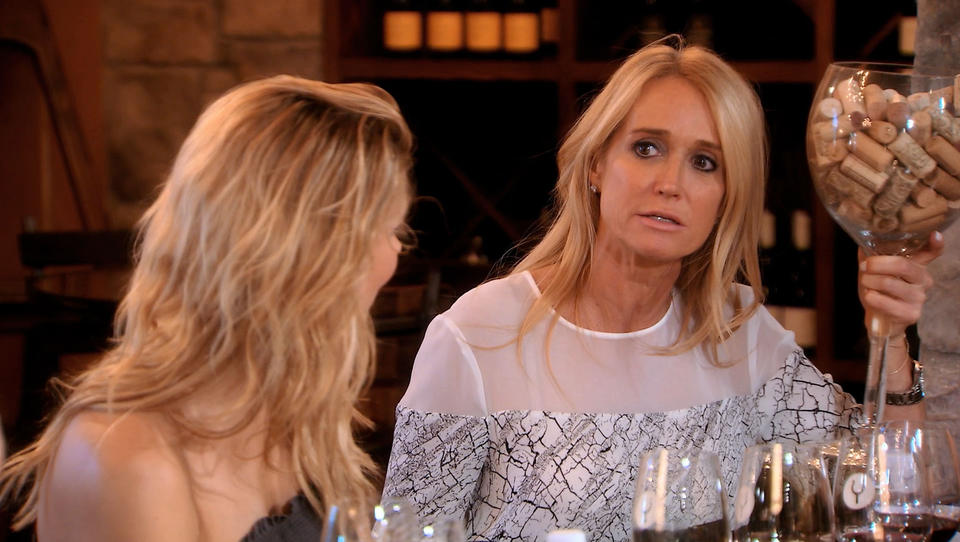 A really funny viewer on Twitter referred to this episode of “The Real Housewives of Beverly Hills” as #SnotFest2015. Totally and completely accurate. We are all sick of two seasons now of watching these women boohoo their daughters off to college. There were more “snore” tweets than I’ve ever seen.

BravoTV can’t possibly think these scenes make their talent look more normal because no “normal” parents gets their daughters their own apartment in New York or University of Arizona and then gives them $1800 a month for groceries as a freshman. Have you people heard of meal plans? Plus, I’ll bet big bucks that both Alexia and Bella have fat stacks of “emergency” credit cards in their wallets for any shopping they NEED to do.

I actually think this episode showed how terribly spoiled these girls are and served to show the rest of us how shallow these parents are. While it’s all cute and funny that nobody knows how to do laundry or cook for themselves, not teaching them basic life skills like how to pay their bills and keep a budget isn’t going to serve them well long term. Then again, theses mommies and daddies may plan to (and can afford to) bankroll their children forever.

But enough of the boohooing for God’s sake. Every happy parent sending their child away to school is a little sad – but more happy for their kid!!! Instead you have Kyle telling her daughter she can come home anytime. She can transfer anytime. If she doesn’t like it, she doesn’t have to stay.

That’s not right. All college freshmen have bad days and they all want to quit and go home at some point. That’s why you have parents to call who will tell you to pull up your big girl panties or soldier on or whatever.

Kyle didn’t go to college so she can’t relate to this but she’s doing her daughter a disservice by handing her an out prior to even seeing whether she likes her new school! Alexia’s in Greek Rush right now – she’s going to make friends and she’s going to have fun. Leave the poor girl alone and just celebrate for her.

And why can’t Gigi and Bella share an apartment in New York City? Seems like the safest and most financially responsible thing to do. Instead, Yoyo hires a designer to create the ultimate pad for Bella in Manhattan. That’s how we all reward the daughter who just got a DUI, right?

Eileen’s stepson is headed back to college but their family is totally normal about it all. The only thing that was weird is that it turns out that Eileen’s stepson took Yoyo’s daughter to prom but Yolanda didn’t seem to know who the kid was when they met for lunch. She was really vague about who Eileen’s kids were even though Eileen clearly knew Gigi. I wonder how involved in her daughters’ lives Yolanda actually is when she’s not playing to the camera.

I rarely feel sorry for Brandi, but watching her ex’s new TV show premier had to be rough. Fortunately, I can say as somebody who couldn’t even make it through the entire first episode, the show was AWFUL.

“I wasn’t going to watch it but I realized I kinda have to watch it because I need to see if my kids are on it,” Brandi says. She has a low-key get together with her besties.

“It can’t be easy to watch your ex and his new wife playing house,” Kim says.

“I’m actually on the show. I’m a character on their show that’s not on their show because they say my name so many times,” Brandi rants. She’s right. I saw that first episode.

“It’s a show about them bashing me and they’re using my children to promote it,” Brandi isn’t happy. Although what is she complaining about when she basically does the same thing to them on RHOBH on a regular basis.

“LeAnn is a C**T-ry music star and she needs to leave my kids out of her mouth,” Brandi is so classy. Yes, she really did say that.

Lisa and Ken are celebrating their 32nd wedding anniversary but much like my husband and I, they’re not making a big ta-do about it. Instead, they’re focused on their son Max.

Max has been working his way up in the family business but isn’t taking things seriously enough to please his parents. They want to promote him – because that’s what he wants – but when they sit down and talk and find out he’s driving around uninsured, they’re not impressed. Dad is mad.

“It’s not funny,” both parents tell him.

“Max has put me through there and back – we’ve struggled with him. Not as much as many parents do, but he’s certainly given us the run around. We had to kick his ass,” Lisa explains.

“I’m still young, Mom. I’m still learning,” Max whines. But the reality is that they’re being pretty responsible parents for people who could just hand him cash and tell him to do what he wants. Look what happened to Rob Kardashian.

“You’re not lazy. You’re just not ambitious,” Lisa tells him.

Then Lisa did something I thought was very, very wrong. We’ve heard before that Lisa and Ken adopted Max when he was a foster child. But other than that, she’s always referred to him as their son. I didn’t like what she said in interview about why he’s different from her and Ken and Pandora when it comes to work ethic.

She wonders if Max is different from the rest of them because he’s adopted and doesn’t share their “genes.” I think that was a really weird thing for any adoptive parent to say on national television. Hurtful to the kid, regardless of whatever he’s done or not done. And I’m sure that some parents might wonder it – I just don’t think she should have said it aloud or on camera. But that’s just my opinion.

I don’t care what happens next week as long as we don’t have to see any more Housewives boohooing about their daughters going away to college. They all say they didn’t get to go and they’re so happy for their daughters but they act like taking them to college is planning a funeral. Get a grip. Maybe you’d all be a little more normal if you’d had a few years away from home to learn how to live like an independent adult.