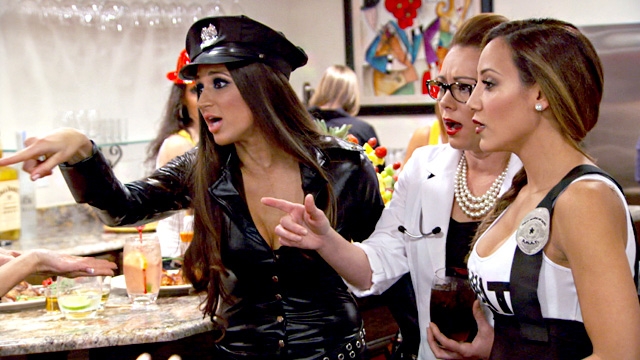 So after he made such a big deal about NOT hanging out around the Guidices because of the ethics of his job, what was Jim Marchese doing at that party at Bobby’s house when he knew good and well that both the Joes would be there?

Is Jim a hypocrite? Or was he looking for five extra minutes of fame on “Real Housewives of New Jersey” when he gets to throw down and start making threats? If so, he got it.

If this guy really does work with the state prosecutor on Juicy’s case, he may have screwed up the case with his behavior that aired tonight. Leading me to believe that he’s not as important as he thinks he is. Or that he’s going to have his ass called on the carpet by the State Attorney General tomorrow morning. Seriously.

Weird thing is that I thought the U.S. Attorney’s office was prosecuting the Guidices – it’s a federal fraud case, right? Is Jim lying or just blustering? Inquiring minds want to know.

Okay, so I’m going to go backwards as usual because the best stuff happened at the “First Responder Party” at Bobby’s house. Bobby became a firefighter after 911 and he’s invited cops, firefighters and all his friends over for a party to celebrate first responders. It wasn’t a fundraiser – just a morale booster. I wonder what he used to do for a living because that’s not a house a rookie firefighter can afford.

Bobby seems like a fairly clueless, happy-go-lucky guy. Not that smart, but nice. With terrible taste in Christmas gifts (really, a porcelain shoe from the drug store for Nicole? Ugh). But it was actually Bobby and his girlfriend, twin Nicole, who ruined their own party.

Jim and Bobby are besties from way back, but Bobby ran his mouth to the Joe G. mafia (including Rosie) when they went bowling about Jim not wanting to hang out with them. So they all arrive pre-disposed to dislike him. I was watching and wondering what the hell Jim was doing there after he absolutely swore he was not going to the party last week. But apparently, he’s truly a “Real Housewife” with FOMO (fear of missing out). So he went.

His wife Amber is a target too, and she has no clue as she arrives that literally half the women in the room have been plotting against her for a week. But we’ll come back to that.

Juicy dresses up as a detective in a regular suit and brags that he’s got some real badges he could have brought along to show. Nicole declares him a “party pooper” for not wearing a real costume. Then the first new friend Joe approaches is a real cop. Awkward moment ensues. Joe keeps moving. And the cop keeps a straight face.

The weirdest thing is that when Amber and Jim arrive, the very first person Jim approaches and shakes hands with is Joe Guidice, introducing himself. Then he greets Joe Gorga like they’re old friends. And Jim has come dressed as a cop.

“My opinion of Joe Guidice is what I’ve read in the newspapers. I just try to stay away from people I believe have a tendency to get into trouble,” Jim explains in interview. “My dad always said you are who you hang around with.” Well, that sure doesn’t explain why he’s even at this party.

Jim tries to make awkward small talk with the Joes about the costumes, commenting to Juicy, “Be a blood sucking attorney – it’s the best way to go, trust me.” Really. REALLY??? OMG.

The Joes joke about how little Jim is and go upstairs to hang out with Bobby in the kitchen. Meanwhile, the girls get ready to rumble.

Remember, everybody knows Amber is about to get her ass kicked except Amber. Nicole warned Dina about the upcoming altercation when she arrived. Rosie stuck her nose into it, totally supporting Nicole’s attack, of course. Rosie LOVES a good fight. Tre was briefed when she and Melissa arrived, but she’d already gotten the skinny from her sister in law and the twins when they went costume shopping for their slut outfits.

“I have some issues but I’m not going to get into them right now,” Teresa tells Amber when she blows her off. Why not now Teresa? Need more liquid courage first?

Teresa goes over and tells Nicole to “elaborate” with Amber. Just gotta interject and say, right here right now, that the New Jersey school system needs to seriously review their grammar program if these men and women are representative of what’s coming out of their public schools.

In interview, Nicole says she didn’t want to have to fight with Amber, but all of us watching know that’s bulls**t because she’s been plotting this all week long. She starts out verbally attacking, and Amber – who is used to being in charge – orders all parties involved into the other room to discuss. This does not go over well.

“I’m not your dog, do not do that to me,” Nicole says and they start yelling at each other.

Best line of the night goes to Amber right before Nicole tears her hair out.

“This is why he won’t marry your f**king a**.” Ouch. Well, she’s right. Bobby’s clearly mortified later when Jim and Amber come upstairs and throw down a clump of Amber’s hair on the kitchen counter. Yum.

It’s hard to describe what happened next. Hair was grabbed – Nicole started it but Amber fought back. Drinks started flying. No idea how long it went on but Jim pulled Amber out of it, with her fighting him all the way.

“Honey, let go,” Jim keeps saying, trying to get Amber to release her hold on Nicole. Then “relax, breathe,” and he walks her out of there and upstairs. They should have just kept going right out the front door. But nooooo, Jim had to get a last crack in. If he hadn’t come to the party in the first place, none of this would have happened. Either that or Amber would have gone without him and she’d have left bald.

“Melissa just completely twisted my words,” Amber complains. True, sort of. She screwed up the gossip but Amber did say that Nicole was a home-wrecker. We’re all just a little confused as to whose home she wrecked.

“I am in shock that it went to this level” Melissa claims. I call BULLS**T on that. She’s loving it. For once, they’re all fighting around her and not with her. She’s smiling like the cat that got the canary when nobody’s looking at her.

Amber goes upstairs screaming and Jim stalks into the kitchen outraged and throws a little rat’s nest down on the counter in front of Bobby.

Bobby can’t believe Nicole attacked Amber. He’s not defending her. Just seems stunned. Instead of leaving, now the fight is continuing on two different levels of the house, with Nicole posturing downstairs and Jim raging at Bobby upstairs.

When Amber blames the fight on something Melissa claims she said, Joe Gorga finds the excuse he’s dying for to get involved.

“Don’t let your wife talk about my wife, you understand me,” Joe tells Jim, like it’s 1950 and he’s the in the mafia. And like a bad movie, in swoops Rino to get right in the middle of it.

“Put your hands out of your f**king pockets,” he tells Jim multiple times.

Read that back to yourself. PUT your hands OUT of your f**king pockets. Really? REALLY? Despite the bad grammar, Jim’s refusal to do so makes us all wonder what he really does have in his pockets (yet another thing for his boss the state prosecutor to investigate tomorrow).

“You know, I don’t trust the guy,” Rino says in interview. He’s suddenly besties with the Joe G. mafia clan and he doesn’t even know what’s going on. A lot of this show is like that. He tells Jim they just want to know why he wouldn’t hang out with the boys, like he’s personally offended by the snub. This all goes back to Bobby lying about why Jim didn’t want to go out with them in the first place.

“Do you really want to go there?” Jim says, like a threat. And when they say yes, he pulls a slimy maneuver.

“You know what’s funny…” Jim says to Rino and then leans in close to Joe Gorga. “I work with the State’s Attorney General that’s prosecuting your brother-in-law, you dumbf**k…”

And now he’s on a role. “I prosecute mortgage fraud,” Jim brags. Wrong audience. He tries to leave and Joe goes after him.

The teasers for next week show Joe Gorga demanding an apology before Jim can leave – “it’s all about respect” – and Jim threatening to have him arrested if he doesn’t back off.

Funny, Amber was just physically assaulted by Nicole in the basement in front of a cop who was a guest and Jim didn’t try to have Nicole arrested. I think he’s scared s**tless that Joe Gorga is going to whip his ass. Wouldn’t take but a minute.

In other news, Dina’s exceptionally sentimental about her shoes and she can’t be set up on a blind date this month because Venus is in retrograde. On the bright side, her closet holds 400 pairs of shoes.

Melissa has wrecked her Bentley, again. Apparently, she’s a lousy driver who totaled up more than $100k in body work last year alone. I say it’s time to get that bitch a Volvo and move on. If they’re really having financial problems, is almost $10k to fix a bumper a financial priority this month? I love how differently these people define poverty from the rest of America.

And finally, Melania continues to behave like a raging disrespectful brat towards her mother. And in response, Tre gives her ice cream. I really do pity whichever relatives end up having to raise this child because she’s hell on wheels.

The Twitter-world might find Melania funny, but truthfully, it’s just a disgrace. You know exactly where she learned the behavior but still, I feel a little sorry for her mother. Her husband is a felon (and so is she) and her daughter(s) has some serious behavioral/anger management issues. I wonder if she’s ever going to crack.

Not going to miss a minute of next week – I wanna see Jim throw down his Bar Association card like a police badge and challenge Joe Gorga. Okay, not really. But I do want to see him wimp out and threaten to have him arrested even though he didn’t protect his wife the same way. Last week, I thought the guy had some ethics (weird as he is). This week I think he’s a hypocrite with “little man” complex.