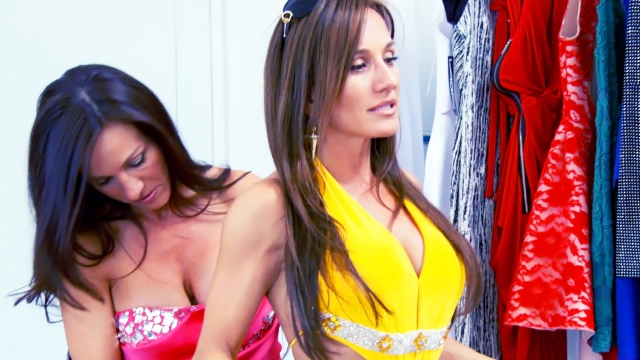 Dina is one traitorous bitch. If I were Teresa Guidice, I’d cut her off so fast she wouldn’t know what happened. She’s not even sneaky about it. After years of watching and not thinking much of her on BravoTV’s “Real Housewives of New Jersey” in the past, now I think even less of her.

Thank God the whole cast is back in New Jersey because we couldn’t handle another Boca episode; that said, I wish they’d left Dina and the twins behind. And Amber and Jim. New Jersey would be better off. Colt’s Neck’s normal residents would celebrate.

Melissa organizes a spa day for herself, Dina, Amber and Tre – and two minutes after she arrives, twin Teresa calls Melissa and, over speakerphone, invites Melissa and Dina to a tasting party the next night. When she finds out that Tre and Amber are there, she opts to be taken off speakerphone.

Amber gives Tre the down-low on what happened on the trip, and Dina apologizes for tossing Amber out but says it was the right thing to do because her husband was misbehaving. Amber doesn’t seem to get the rules of coupledom.

“And that whole thing about Rino came out because of Jim,” Amber tells Tre, defending herself. Obviously, Amber was the one who told the rumor to Jim. It’s actually her fault. #OwnIt

Dina throws a fit because she doesn’t want to talk about it at the spa day. Tre points out that she’ll be the topic of the gossip at Teresa’s party she’s not invited to the next night, and Dina tells her not to worry.

I will not allow anyone to talk anything negative about you ever. In my presence, it will not happen,” Dina promises. And then, she’s the one to bring it up when the first opportunity arises. What a freakin hypocrite. I cannot stand her. Too bad we can’t reach through the TV set to slap people, just once in awhile.

The “tasting” party at Rino and Teresa’s friends’ house is a totally production-orchestrated event. Who throws a party like that on zero notice and actually expects their friends to show up? Seriously. Cuz the Gorgas have nothing on their schedules and are dying to hang out right after spending all that time in one house together in Boca. But they’re there. So’s Dina – so she can cause trouble.

She’s all about trying to get everybody to make peace before her Project Ladybug event. By the way, Google her charity – not exactly lacking in controversy and just a little shady. Might be straightened out now but it sure didn’t start out that way.

Dina looks horrible with a really bad up-do and an ugly dress. And she’s the first one to bring up the whole rumor about Rino and Santa.

“I want it all to go away before Ladybug,” Dina says.

Teresa wants an apology from Tre. Say what? Tre wasn’t even in Boca when the s**t went down.

“It’s not about what Victoria said,” Dina says, throwing her old friend Tre under the bus, exactly the opposite of what she said she was going to do. Claims she’ll never let a bad word be spoken about her friend but instead she brokers an apology deal, allowing the twins to believe she thinks it IS Tre’s fault. What a traitorous bitch.

Here’s the problem – Mrs. Guidice wasn’t in Boca to defend herself. Like my cousins and I always joke when one of us might miss a girls’ night together, “be there, or be the one we talk about.” That’s exactly what’s happening to Teresa now. Somehow, even though it was Jim Marchese who blew the secret after Amber (who was there when Victoria Gotti told them both) obviously told her husband.

“Amber sent me this really obnoxious text, like Jim is not getting involved at this event at all,” Dina tells them. Don’t you think, given what just went down and who is on the guest list, that maybe this time Jim is doing the right thing? He definitely doesn’t belong anywhere with that group anytime soon.

But it turns out Dina is screwed and hasn’t sold enough tickets because she was heavily relying on the twins and the Marcheses to reach out to all of their friends in Colt’s Neck and now nobody is helping. Sucks to be Dina. #Karma #NamasteBitches

But of course, they’re not talking about fundraisers – Dina’s set this up to dish to Tre about what was said at the tasting party.

Dina tells Tre that Teresa is disappointed in her. Tre is justifiably confused considering she wasn’t even there and wasn’t the one who blew the secret.

“Listen, I know in my heart I didn’t do anything wrong. I have nothing to do with this at all,” Tre is not going down this road.

“She wants an apology,” Dina says. Give it a rest Dina. You are the worst friend!

“An apology for what?” Tre asks. “Listen, I will not be provoked. You understand?”

“If that’s how they feel, you can’t discount it,” Dina continues. Who the f**k was she friends with first anyway? Maybe she figures she’s going to need a new crowd when Juicy and Tre go “away.”

“I have a lot on my plate right now. This is the last thing that I want to deal with. This should have ended in Florida,” Tre rants. She is pissed. At Dina.

“I confided in a friend – which was you – and I didn’t tell you to go tell them. You weren’t supposed to open your mouth unless it was said… but you felt the need whatever… but I’m not bowing down to anyone for something I didn’t do,” Tre says very directly. Oh wait, sounds like it’s Dina who owes everybody an apology. She’s the one who opened her big mouth first in Florida. And even after Jim exploded, she could have kept her mouth shut and never involved her dear friend Tre. But she did. As fast as she could.

“Right now, instead of us talking about Ladybug, you want me to apologize?” Tre sounds flabbergasted that she’s wasting her time like this. She even brought special Fabulicious ladybug cookies for their little meeting. “My plate’s full… they’re trying to drag me into their family drama? Are you kidding me?”

This woman has learned her lesson about all of these people and she’s sick of the bulls**t. Dina tells her that whoever starts trouble at her event won’t be her friend anymore. And then in the teasers for next week, we see both twins ganging up on Tre and behaving in a most unladylike manner at a function where children are in attendance.

Other notable events this week: Production is working hard to integrate old and new cast members in hopes of having a workable and likeable group for another season. It’s the only explanation for Nicole and Bobby joining Kathy Wakile and Jacqueline Laurita (and their spouses) and Rosie at Kathy’s house, ostensibly to pick up cannolis for some event Santa is having.

It’s so orchestrated it’s painful to watch. Nicole acts like she’s never heard of any of them – as if she NEVER watched RHONJ before she was cast on it. Utter, total bulls**t.

Nicole asking about how Kathy and Jac met was just stupid. First thing Kathy tells Nicole about Jac is that she has a son on the “autism spectrum.” Then Jac gives all the details about her miscarriages. Seriously? This is a first-time you meet conversation? #TotallyScripted.

First thing Nicole tells them is about the rumor in Florida and all the chaos that went down. And she’s blaming Tre for it. I didn’t actually hear her blame Jim Marchese. How did that happen? And she tells them the details of the rumor and they all call Victoria Gotti dirty names. Very KLASSY.

“The whole word ‘motherf**king’ has a whole new meaning,” Rosie jokes in interview. She’s right. But she’s wrong about who is responsible, jumping to conclusions about her cousin.

“You’re just as f**king guilty as the person who started the goddamn rumor,” Rosie is judge and jury about Teresa telling it to anyone. She’s totally letting Dina and Jim off the hook, forgetting that they were the ones who let the cat out of the bag. I’m really glad these aren’t my relatives. With family like that… OMG. Usually I like Rosie but sometimes I think she jumps too fast.

I don’t even know what to say about Amber’s topless photo shoot in a stable to celebrate her five years of surviving cancer. Weeping Jim doesn’t work for me after evil-Jim-with-horns in Boca a few days earlier. The guy is a hell of an actor. Slimy person, but great at faking emotions. I don’t think he cares about anyone but himself. Especially his wife. Otherwise, he never would have behaved that way and ruined her relationship with the girls in Florida. Some things aren’t fixable.

The romantic dinner in a gallery surrounded by the pictures of Amber would be sweet and touching except she goes down the whole road about how people who haven’t had cancer don’t appreciate life. Pardon me while I barf. Cancer is awful, but everyone has their own burdens to bear, diseases to fight and life challenges. Not everyone sees life through Amber’s eyes, thank God.

“I don’t think my wife should be hanging out with most of the women in this group because they’re not good people. They know nothing about family, faith and love,” Jim says. What a total hypocrite. Takes one to know one, right? Jim is not good people either so he can easily recognize that the twins are bad.

I just can’t take any more of this whole storyline. And I can’t stand Dina, the twins, Amber or Jim. Jacqueline remains entirely one dimensional and as I have no desire to watch a show with storylines entirely about her life as the mother of an autistic child, I truly hope BravoTV is not bringing her back. But I can’t count on it. They’re getting desperate.

Not excited for next week.