And the Best Tweet of the Night Award goes to @CaitlinDistler during tonight’s “Real Housewives of New Jersey” on BravoTV.

OMG. That was HILARIOUS. And true. Seriously. Let’s evaluate.

Amber is bats**t nuts. The twins are like nails on a chalkboard. Melissa is starting trouble and enjoying the blowback a little bit too much. And Dina is getting mother/daughter tattoos. Plus three of them allowed a spa to put birds**t on their faces for a beauty treatment? No, really. REALLY!!!

Clapping back! An attorney hired to investigate The Real Housewives of Beverly Hills star Erika ...

Clapping back! An attorney hired to investigate The Real Housewives of Beverly Hills star Erika Jayne has responded to a snarky tweet she posted.⁠
⁠
Things got ugly after the two exchanged heated remarks about her current legal issues and a nasty feud ignited online between the housewife and Ronald Richards.⁠
⁠
While she is spending the episodes dabbing her running mascara and getting sympathetic hugs from the other wives, Twitter users are seeing her get down and dirty with attorney Richards.⁠
⁠
More details - including the shall we say interesting back and forth between Erika and Richards - at our #linkinbio!⁠
⁠
(📸: Bravo)⁠
------------------------⁠
#Bravo #bravotv #bravomemes #bravoholics #rhobh #realhousewives #therealhousewives #erikajayne #tomgirardi #beverlyhills #beverlyhillshousewives #legaltroubles #clappingback #merit #nomerit #legaldrama #housewivesdrama #snarky #twitterexchange ...

Oh, and Jim Marchese isn’t involved in the Guidice’s prosecution in any way – in fact, the US Prosecutor’s Office went so far as to put out an official statement saying they’ve never even heard of the guy after they found out what he was claiming on the show. That had to be embarrassing.

So all the screaming and threatening and drama at the end of last week and beginning of this week was for nothing. The only thing Jim can do is sue somebody. And he warns us tonight that he’ll sue them and “make you my bitch” instead of fighting. He actually said that.

I did find Rino’s reaction to Jim’s threat to have Joe Gorga arrested very interesting. Is he really such a wise guy or as big a wanna-be as I think?

“He’s a f**king rat. Enough! Enough! We don’t deal with rats,” Rino says, all mafia style as they’re leading Joe back into the house. He’s like two seconds from getting locked up for assault and we all know it.

But what was absolutely insane was that Jim and Amber Marchese WENT BACK INTO THE HOUSE at that point to find Amber’s keys even though Teresa would have gotten them. Jim wanted more fight. This time he took on the girls in the crew. Foolish man.

He tries to talk with Teresa, which is insane given what’s just gone down.

“What I said was I don’t want to put your family in danger…” Jim lies about why he told Bobby he didn’t want to hang out with them. Then he talks to Teresa likes she’s a five-year-old child and tries to explain what he does – which we now all know is totally bulls**t.

When the women don’t seem to be following him he gets nasty.

“Does anyone here have an IQ of over 12?” Jim asks nastily. No, Jim, they don’t. But neither do you if you’re sitting there claiming to have prosecutorial authority on television when you really have a little mortgage company and do homemade commercials for entertainment.

“What do I do? Mortgage fraud prosecution!” Jim yells at Teresa. But not really. Just kidding. Oh wait, he didn’t say that. He led all of them (and all of us) to believe he’s got anything to do with prosecuting mortgage fraud. Maybe in the case of somebody who commits fraud against his own company, but that’s about it.

Plus, dude has a shady history with a company he worked for in the past. Turned his own bad deeds into a “whistleblower” payout that probably bought that lovely house.

“He’s coming at us like another angry woman would,” Dina says (and that was her only salient point of the evening).

“Pardon my French, but I really think Jim is trying mind-f**k Teresa,” Melissa says. I kind of agree with her. The guy is full of s**t. I felt sorry for Tre. She really didn’t want things to escalate any further. 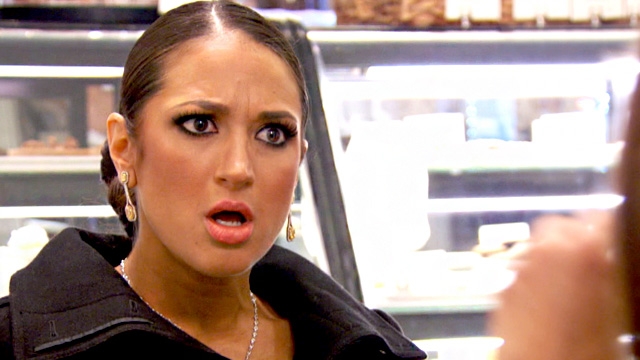 The big fight between Amber and Nicole has the unintended consequence of breaking up the bromance between Jim and Bobby, who have been bffs for either 10, 12 or 15 years depending on what they’re all screaming at any given moment.

Bobby stops by their house to talk and Amber and Jim both attack Nicole. Bobby’s not brilliant – but he’s seen these two lying out their asses for awhile now. I don’t like Nicole, but I also don’t really think she won this round. Amber and Jim just lost it. Nobody actually came out a winner.

“Amber, let’s talk about what started this thing. You apparently heard some kind of bulls**t story that Nicole had ended a marriage,” Bobby begins and the s**t hits the fan.

Amber defends herself and says she was protecting Nicole, not gossiping about her. But we all watched this s**t go down over the past five episodes and we know she’s a liar.

“Nicole is right. These people went bad. They made their bed. They need to lie in it now,” Bobby sounds sad his friendship is over. And he leaves his keys to their house on the kitchen counter to confirm the breakup.

It gets weirder when we see Dina and Teresa headed into the spa to meet up with Amber – apparently she invited them to apologize for things. I’m not sure having an esthetician apply birds**t to their faces without warning them constitutes a nice thing to do, but hey, I’m not from New Jersey. I’ll have to consult an expert and get back to you.

“He wanted you to know that he respects your family,” Amber is apparently playing emissary for her husband. Wonder if he knew about that before he saw the show tonight? And by the way, we all know he never said that. The only people he’s been apologizing to lately are the state and federal authorities that he claimed to be affiliated with on the show.

In all honesty, the only humor on the show tonight was the whole chicken farm thing with the Guidices. Kinda like the puppy they gave the girls for Christmas, who would take care of the chickens after you “go away” folks? I really hope that chicken shopping trip was to replace the ones their dogs murdered the night before at his parents’ house.

By the way, I can totally relate to Gia’s horror because I live on a Caribbean island and my dog Houdini has occasionally been a poultry murderer. But they came into our yard. #selfdefense

Sweet scene between Rosie and Juicy where she lets him know she’s there for him, and then they try to get the sheep on the farm they’re visiting to smoke. It’s one of those “you had to be there” things.

Of course, the show had to end on its typical vitriolic note. It was a very telling exchange between Amber and Melissa. They met at Teresa’s suggestion to Amber (say what?) and Amber seems to think she’s going to get an apology out of Melissa. She’s as delusional as Sonja Morgan on “Real Housewives of New York.”

“I don’t necessarily need that big apology but I just want some sort of an explanation and empathy for the absolute mayhem that she created,” Amber says self-righteously.

S**t hits the fan within a minute of sitting down together.

“I didn’t think that was going to happen. I was completely in shock with the whole hair pulling…” Melissa tells Amber, as if that’s going to make Amber understand that she had no role in it. Of course, she did. Because she repeated the gossip Amber told her. She repeated it badly, but she did tattle. Still Amber’s the one who gossiped first.

“Amber, I have to say, as an onlooker, you brought the aggression,” Melissa says Amber started the actual fight by smacking Nicole’s hand away.

Amber backs it up to fight about being “betrayed” by Melissa and denies having said exactly what she said – and BravoTV was kind enough to show us the clip for like the fifth time so far this season.

“It was Nicole that broke up her family – I heard that through the grapevine,” Amber told Melissa on the way to Teresa’s product sampling party in Episode 2.

“I’m not here to argue with you,” Melissa wants to calm things down. She knows what Amber said and this isn’t her first rodeo so she knows that all of us know by now too.

“I’m not here to argue with you. What I see is you’re a liar and a troublemaker and a pot stirrer,” Amber starts screaming like the piece of trash she is and the conversation’s pretty much over.

“This girl doesn’t have to have this rumor out there about her that you lied about,” Melissa defends why she told Nicole what Amber said.

“What’s your agenda?” Melissa asks Amber directly. She hinted at that during their last lunch but tonight she just flat out asked.

“I don’t know what’s happened to you in the past eight years but you’re a very tainted woman,” Amber announces, wearing her Ms. Self-Righteous Hat again.

First, who is Amber to judge? And second, where has she been the past few years that she didn’t see what has “tainted” Melissa, if she is? Under a rock? All you had to do was turn on BravoTV and see why Melissa might not be the same party girl you knew eight years ago. Duh. Things change.

Not even sure I care what’s going to happen next week – I’m more interested in the whole story about the network firing Teresa Guidice and bringing back Jacqueline Laurita.

Apparently Teresa isn’t playing ball to help pump up this season’s ratings and the network is not happy. I’m kinda bummed cuz I was looking forward to seeing how she rocked her new ankle bracelet with her typical attire. But whatever. You can’t have everything.