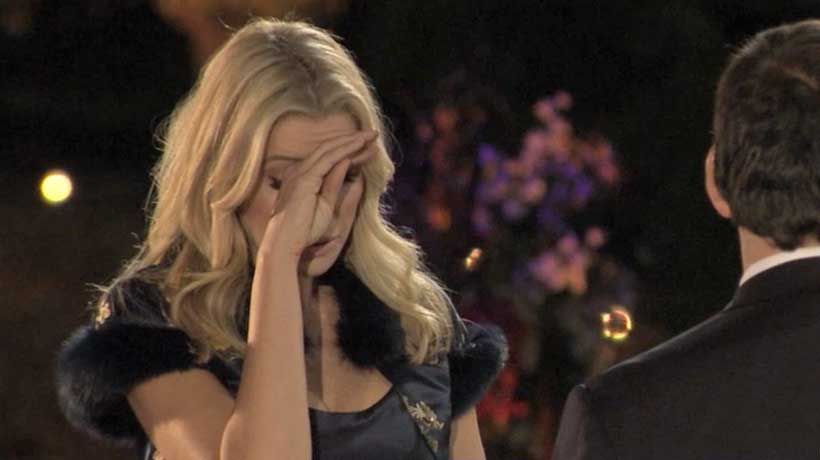 “What we really learned most out of ‘Marriage Boot Camp’ is that reality television celebrities really are cray cray,” was Aviva’s deep thought in interview in the final episode of the WEtv series.

Sort of an interesting ending to a show that began with Director Jim and Elizabeth Carroll discussing the way the other cast members ostracized Aviva and Reid.

“They are so focused on Aviva and Reid they may not be paying attention to what they need to do,” Jim worries.

“It’s like this whole group has projected all of their junk outside themselves instead of focusing inside themselves,” Elizabeth agrees. It’s an interesting point, but with the big ring ceremony the same night, there’s not much more that can be done to get these couples to work on their marriages.

Speidi is still in jeopardy, as far as they’re concerned.

“They have not resolved it yet,” Jim says of the kid issue

“They need to stop putting away their ideas of the way life should be and start looking at life the way it is,” Elizabeth says.

“Both of them are going to have to sacrifice tonight,” Jim agrees.

The biggest disasters are Tyson and Rachel who I honestly thought were going to be the most boring couple on the show. Actually, they still were, but they had the most intense relationship issue. She wants to be married and he doesn’t.

“He has spent his entire relationship with Rachel avoiding the issue of her needs,” Elizabeth says.

Meanwhile, the campers are chatting amongst themselves.

“I did not realize how serious the baby thing was… I thought all girls want to have babies, but this is like life or death kinda s**t,” Spencer complains.

“I thought this was Marriage Boot Camp, not Baby Boot Camp. Get me out of here,” Spencer says. But he’s sorta right. Rachel wants marriage and a baby. Natalie is yacking about babies. Even Aviva is DESPERATE to have another baby with Reid. Poor Spencer was screwed before he even arrived.

“Marriage Boot Camp is like 200 years of marriage,” Aviva complains. That was kinda funny. Given the week she’s had dealing with the idiotic behavior of Natalie and Heidi, she’s not that far off. But she’s still really worried.

“It’s not beneath Reid to get me up there and not give me a ring,” Aviva says.

“Start taking folic acid,” Syleena tells Heidi, and Heidi admits she’s already taking prenatal vitamins. Does Spencer know? I’m not sure encouraging her to try to get knocked up against her husband’s will is a great idea. I think she’s a sneaky bitch and wouldn’t hesitate but I was a little disappointed to see my fave camper Syleena encouraging that.

All the guys are giving Tyson s**t. Anybody who needs that much convincing should not be popping the question that night.

“For me, marriage or no marriage, I feel like the relationship is the same,” Tyson says he doesn’t need a piece of paper.

But Rachel has never given Tyson an ultimatum before. She tells the girls that “Marriage Boot Camp” has given her the boost she needed.

“If things don’t come through, I do have to leave or make a major life changing decision,” Rachel says. I just want her to dump his ass regardless. He’s a total selfish jerk and a leopard doesn’t change his spots that easily.

Reid attacks Tyson and calls him a “selfish pig.”

“I just outed you, I’m sorry – but now you have to do something,” Reid says.

“Dude, get it together,” Jacob tells Tyson. Tyson hasn’t got an ally in the house and if he proposes, I believe it’s entirely due to peer pressure. And the convenient fact that production will probably provide a nice big diamond for him to give her.

“All I’ve ever wanted is to make her happy… but now the pressure is really on,” Tyson admits.

I could drag out this whole ring ceremony thing but I’m not going to because every couple at “Marriage Boot Camp” deserved to stay together. I was cheering for everyone except Tyson and Rachel. He’s going to ruin her life.

All of the couples still have issues to work on but none of them need to split up over them – all relationships have problems and marriage is hard work.

The big deal-breaker questions that they were asked in the first episode were revealed to each couple before they exchanged rings, but it didn’t stop a single one of them.

“Natalie lied about being willing to give up her career for Jacob,” Jim reveals. Then says Natalie already knows the answer to Jake’s question because she cheated.

“I feel like you’re making me choose my career or my marriage,” Natalie whines. But regardless, they give their wedding rings back to each other.

“I promise I’m going to be a good girl for you… I don’t want to jeopardize what we have,” Natalie says.

“I can be that man that you want until death do us part,” Jacob promises. I totally don’t think she deserves him. I hope she treats him better going forward. They could be really happy if she tones it down like 80 percent.

“I still can’t believe all the stuff that’s gone down on this show,” Spencer says. “This boot camp has made me realize how truly selfish I have been.”

“I don’t want to resent you for having children. And I don’t want you to resent me for not having kids,” Spencer tells Heidi. For a second, I had hope – but then they exchanged rings. I don’t think they would have actually split up regardless but they have some serious issues to work out. Hearing they’ve got a plan to be pregnant by September wasn’t that comforting.

Heidi won. But did Spencer? And according to the principles of “Marriage Boot Camp,” if one side loses, neither side wins.

“Getting my ring back meant more than getting it originally,” Heidi says. Maybe there’s hope. She needs to stop being such a #MeanGirl before she starts raising children or she’s going to raise snotty little bitches just like herself. Just sayin. How involved will Spencer be based on the comments he’s been making about children the past 10 episodes?

Reid won’t leave Aviva if she does another TV show. But Aviva will leave Reid if he doesn’t have another baby with her. And yet they exchange rings. Guess Reid’s going to be doing the same thing Spencer is.

“You think we did okay out there?” Aviva asks as they walk away, making the whole thing seem really fake. Jim and Elizabeth make some comments about it seeming insincere too, so I’m not the only one who felt like it was weird.

Kiwane lied when he said he wouldn’t leave Syleena if she didn’t give up her career. But Syleena’s promise to stay off the phone and pay attention to him and their relationship was the truth.

“IF he doesn’t give me my ring back, maybe the ring was never mine in the first place,” Syleena says. But of course, they exchange rings. And I was glad because I believe they truly love each other.

“What we’ve discovered here is everlasting… it’s such a blessing,” Syleena says. But remember Syleena, it’s only “everlasting” if you keep your promises and stay off the damned phone and pay attention to your husband and family.

Then Tyson and Rachel are up…. Drum roll please!

“I’m either leaving here with a fiancé or I’m leaving behind an ex-boyfriend,” Rachel threatens. Good for her. Except I don’t think she should marry him no matter what.

Differently from the other couples, Jim tells Tyson and Rachel it doesn’t matter what the deal breakers say because Rachel gave her ultimatum the prior day.

“It’s time to grow up. I’m here to tell you tonight that I can’t continue to live like this,” Rachel says. Six years with no proposal is enough for her. Maybe.

“When we got here, I didn’t think we had any issues and we had a great relationship,” Tyson shouldn’t even admit that out loud. Run, Rachel. RUN!

“I’m torn because as badly as you want to get married, I sometimes feel like if it’s love it’s love and it shouldn’t matter that much,” Tyson explains.

“It’s hurtful to know that it’s just such a question to you,” Rachel says.

Jim coaches Tyson to let Rachel go. I was right there cheering him on. If she’s not smart enough to walk away, and if you really love her Tyson, set her free.

“Let her have a man who will marry her, who will love her enough. Just let her go,” Jim says.

Everyone looks shocked when Tyson pulls out a ring box and proposes. I just felt sick.

Everybody screams and cheers when they come back into the mansion engaged but I’m certain he’s just going to hurt her. They reveal that Tyson and Rachel were married five months after the show filmed. But they also revealed that Rachel has a baby due in June. Anybody want to do the math on that to figure out how she finally got Tyson down the aisle?

“We look forward to seeing how successful you guys are going to be in the future,” Jim toasts the cast at the end of the show.

Now the only thing left to ask is, who are the next Reality Stars headed into “Marriage Boot Camp?”