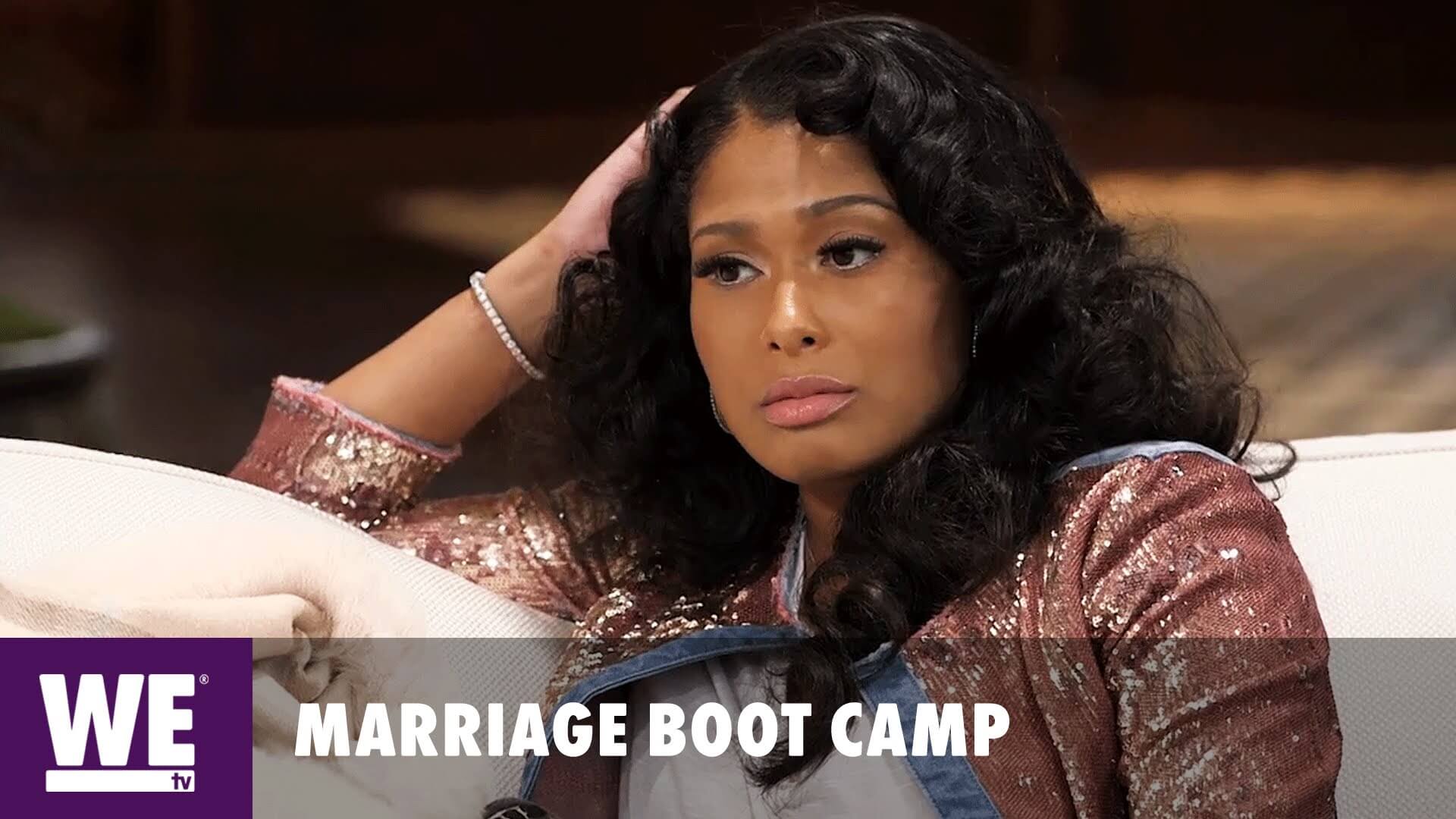 Friday night’s episode of “Marriage Boot Camp: Reality Stars” on WEtv was the heaviest so far, for this group of campers.

Cedric has forgiven Sundy for not telling him that she had a prior relationship with Benzino.

“Ten years ago – what’s it to me? The things is, just be honest,” Cedric is still miffed she didn’t tell him the truth, but realizes it doesn’t matter.

“I owe her an apology for my conduct, for how I carried myself,” Cedric says. He’s whipped. Sundy deserved all she got – and worse for not telling him she’d slept with Benzino. I really like Cedric, but I think he’s a puss.

“Forgiveness is one of the greatest gifts we give ourselves,” Marriage Boot Camp Director Elizabeth Carroll kicks off the day’s exercise about things in their pasts that are screwing up their present day lives.

“Today you’ll have a chance to rid yourself from the negative emotions that have been weighing you down for years,” Book Camp Director Jim Carroll explains.

They split the group up again and tell them to identify what issue from the past is messing them up now. It’s actually an interesting variety this time.

Sugar Bear’s daddy shot at his uncle when he was little, and he lost his relationship with his cousin.

“I don’t want to be lonely no more,” Sugar Bear says. “I’m tired of being by myself.”

“That sexual addiction and cheating is breaking you two apart,” Jim tells him.

Ink got cheated on when he was 12. So he doesn’t trust women. June has issues with her mother. Cedric has mother and father issues.

Sean’s failed business left him with doubt. But basically, as usual, I get the impression this dude is just playing along.

His wife, Catherine, on the other hand, was called “pig” by her sister. She has huge issues that we didn’t know about like. Like BIG issues that keep her from traveling and stuff.

Sarah’s parents had a nasty custody situation that left her questioning the motives of people in her life since her father only wanted her to hurt her mother.

Althea never had family support and had to grow up early. Benzino was in a gang, and friends were getting killed all the time.

“It got to a point where I couldn’t go to wakes anymore,” Benzino says.

Sundy doesn’t want to do the drill.

“It’ll make such a difference in your life. I promise you,” Elizabeth tells her. But Sundy walks out. David follows her to talk.

It turns out that Sundy’s issue is so deep that she hasn’t even shared with Cedric or her mother.

“Sundy seems to be hiding something very painful in her. We have to push her to reveal her pain so we can confront whatever self-hatred this scar is causing,” Elizabeth says.

“I was 12, maybe. Twelve years old, and this girl she used to babysit me. And when I would go to sleep she would um, touch me,” Sundy sobs her way through the story.

Elizabeth sees it as a huge breakthrough opportunity for Sundy and Cedric. But at no point during the rest of the episode is Sundy ever willing to talk about what happened to her with her husband, despite the fact she participates in the drills.

“I didn’t come here for this,” Sundy tells Althea.

Ink starts picking on Mama June when he gets bored. And then he and Catherine get into a fight about the way he talks to everybody.

“Don’t mock me,” Catherine starts yelling. Sean sorta sticks up for her, but not enough, and she stomps off, furious with her husband.

“He can’t mock me like that, when all I do is love on people,” Catherine cries on Sundy’s shoulder.

“I feel like I reacted appropriately,” Sean says. Catherine definitely doesn’t agree. After all, Judge Toler told Sean that he was supposed to get her back in evaluations the prior night.

Then it’s back to work, with a nighttime drill that was pretty intense to watch, much less participate in for the boot campers.

“We have come in her and scraped the scabs off some of the deepest wounds you have,” Elizabeth says, starting the next exercise. “You must confront and forgive the person who caused your pain.”

“I’m trying not to be a product of my past but it’s hard,” Ink says. He’s definitely giving his 100 percent, even if he’s a jerk to the other folks in the mansion.

“You are the reason why I call women bitches,” Ink tells Marriage Boot Camp Co-Director Ilsa Norman, who is playing the role of the girl who cheated on Ink when he was a tween.

“That’s the real Ink coming through,” Jim says when Ink finally breaks. Then he gets to throw all his rocks in the water.

Althea and Benzino are arguing while Ink’s doing his drill. Everybody looks annoyed with them. It’s ALWAYS about those two. They’re ridiculous.

And we learn more about Catherine’s deepest issues. Who would have thought, right?

“I’ve never been able to be completely comfortable. I still can’t change in front of my husband,” Catherine says.

Sean, as usual, seems insincere. But hey, he’s forgiving somebody who screwed him in business, right? Not terribly personal.

Benzino’s was really interesting to watch, but Jim didn’t think he was taking it seriously at first. So he got really tough with him and brought up a lot of things Benzino hasn’t talked about at boot camp.

“Underneath Benzino’s tough exterior lies a boy who has been badly damaged by violence in his childhood,” Jim says.

Benzino says he forgives everybody who has screwed with him in his life. Then Jim asks him about the nephew who shot him at his mother’s funeral.

“I don’t talk about the situation with me getting shot by my nephew,” Benzino says in an interview.

“It takes time… you can’t close all wounds, Jim,” Benzino says. But Jim tells him that it can be done, and gives him examples.

“That’s nothing like being shot by somebody you love,” Benzino says. But he forgives his nephew for shooting him, and for hurting his mom.

Sundy was intense to watch, but I get the feeling something is off with her. Either she’s not telling the whole story or something else happened that is really in the forefront of her mind.

“I forgive you for taking my innocence away,” Sundy tells Elizabeth, who is playing the babysitter that molested her.

“I’m throwing the self-pity rock in the lake and that feels so good,” Sundy says. Wouldn’t that be nice?

“You are so courageous,” Elizabeth tells her.

“I want my mom,” Sundy sobs into Elizabeth’s arms.

“She’s one of the strongest women I’ve ever seen,” Catherine says, admiringly.

Thank God there were no evaluations that night because I don’t think anybody could have handled a dose of that mean judge. At the same time, I think the boot campers needed some adult supervision.

Sundy’s still shutting Cedric out. She’s unsure if she can love anybody else after what happened to her. I think there’s something else – in addition to the babysitter – she’s not talking about.

Catherine and Sean start fighting. She wants to talk, and he wants to go downstairs and get drunk with everybody else. Seriously?

Next week the topic is shame, and they’re using those paddles again. I hope Jim stands farther back this season. Don’t know how many whacks his nose can handle. Hank took out his face last season!