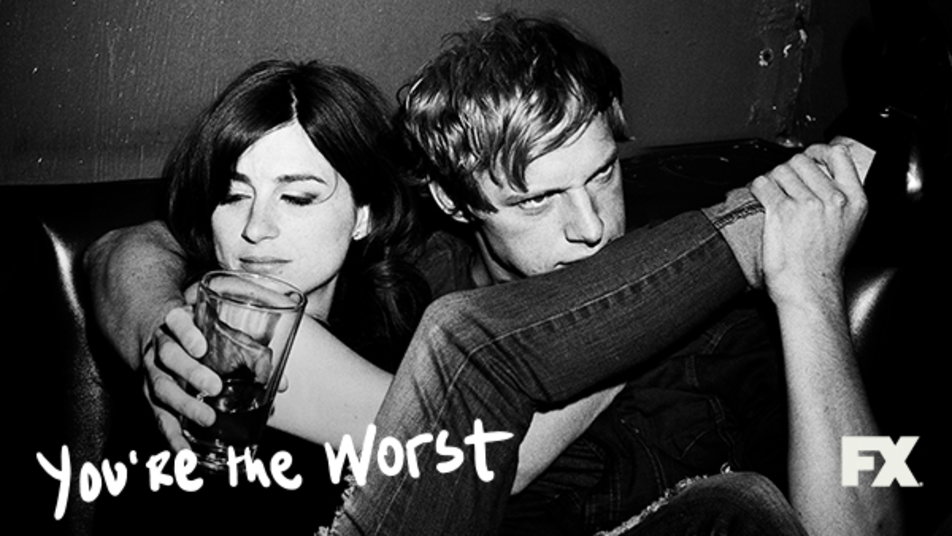 The best comedy about relationships and single living, You’re the Worst, returned to the air this week on FXX and just like the entire first season, it hit another bullseye dead center with its Season 2 premiere, “The Sweater People”.

At last season’s end, Gretchen (Aya Cash) was left homeless after her faulty vibrator set her apartment ablaze. After Jimmy (Chris Geere) embraced her in as his steady girlfriend and new roommate, we are left with the unsettling–but oh so underlying brilliant shot–of both Gretchen and Jimmy’s separate looks of consternation immediately after giving each other an encouraging look of love. Is it duplicitous? No. Just plain fear, spilling out all over the TV screen. All of this plays out while the chorus of the show’s theme song, 7:30 AM by Slothrust, “I’m going to leave you anyway…” played in the background.

Hearing that song at the start of every episode, and especially that lasting moment punctuates the hopelessness and pessimism towards love by these two characters that something will either tear them apart or one person will die before the other. It is dreadful poetry at its finest. Yet through it all, Jimmy and Gretchen boldly travel where every serious relationship has gone before because despite the realities of statistics and reality, when you do find true love, it can be worth all the pain. Thankfully, none of that vibe was lost on the Season 2 premiere, which finds Jimmy and Gretchen resisting with every bone in their body the regretful act of settling into the land of ordinary.

“We just choose not to be them (“The Sweater People”) because they remind us of encroaching death,” says Jimmy right before planting a kiss on Gretchen as they simultaneously build up with a “mmmmmwah!”. I found that last part was nauseating and I’ve been living happily ever after for nearly 20 years. It’s that kind of repulsion that slingshots them back into party mode taking drugs strong enough to put down a large jungle beast. It’s a self-destructive cycle that’s spun continually with the help of Jimmy’s personal chef and PTSD-suffering roommate Edgar (Desmin Borges) unknowingly, and Gretchen’s spiteful, self-centered bestie Lindsay (Kether Donohue) who knows exactly what she is doing.

Edgar and Gretchen assume their familiar roles of angel and devil, respectively, sitting on the shoulders of their friends. Edgar’s pure intentions to get his friends out of this cycle, and suggesting they dive into a family plan to solve their cell phone problems is a noble act but their partying is affecting his ability to sleep and scheme how he’s going to win over Lindsay. Yes, that Lindsay, who is still fresh from being rejected by her nebbish husband, Paul who has chosen an online emotional friend to pursue over trying to get his wife to understand the meaning of love.

Paul: Love it about putting someone else’s feelings above your own. Can you do that?
Lindsay: Ew.

Jimmy’s attempt to help Edgar through discouragement backfires and he goes over her place to console her. He hopes that he can be the beacon of care that she’s missing from her life. It’s just that he doesn’t know that all she wants is someone she can walk over and someone to be reckless in life with. That’s one of the many things to love about Edgar, the impossible never deters him.

Meanwhile, Lindsay’s plea to Gretchen to engage in hurtful sex acts to keep the party going has a much bigger design too. Mainly it’s to live out her regrets or selfish desires through Gretchen’s current fling.

As ugly as that sounds, there is a decent bit of truth in it, although it’s taken to extremes, but it’s in those far edges that Lindsay thrives as the worst-natured friend of this bunch. It doesn’t matter if she’s right or wrong, because there are no easy answers, but it’s her solutions that are so simple on the surface but show to dig up more dirt than intended.

There are so many reasons to love this show but the thing I love about is that there’s no other place to see characters like this. Where else can you find a character so brave to go into war and come back and be the emotional and tender, decent heart of the show? Then there’s Lindsay who is filled with adorable hate and selfishness, but is so hard to root against. She’s smarter than what she shows her friends, it’s just that she uses all of her talents for evil things, which by the end of the episode, is something sinister.

Yes, Jimmy is the typical struggling neurotic writer but his bull headed approach at relationships is full of honesty and cuts beneath the flesh. As does Gretchen’s musings and observations on life, career, and independence. That she fails to summon that strength when she faces her clients makes her so much more human and believable. Jimmy and Gretchen laugh at the silly and often unnecessary places that too many relationships fall into, to ensure they never tread the same ground. Yet fight as they may, they keep landing in those familiar spots, because, well love is a bitch.