On the latest episode of Real Housewives of New Jersey, Jennifer Aydin gave a tour of her New Jersey mansion and it’s pretty incredible. As the wife of plastic surgeon Dr. Bill Aydin, Jennifer is living well in a nine bedroom, 16 bathroom palace located in River Edge.

Jennifer and Bill Aydin’s home is 12,000 square feet of luxury living, which is perfect considering that the RHONJ couple have five kids, ages 5, 7, 9, 11 and 13. In addition to the main part of the house, which is already huge, the basement adds another 8,000 square feet and holds a theater, a basketball court and a spa with a sauna.

The entrance of Jennifer’s home is impressive, with a large double staircase that frames a huge entryway. Like most of the Aydin home, the interior is white and clean. Though there’s a ton of room inside, the home has been decorated sparingly, leaving plenty of open space. 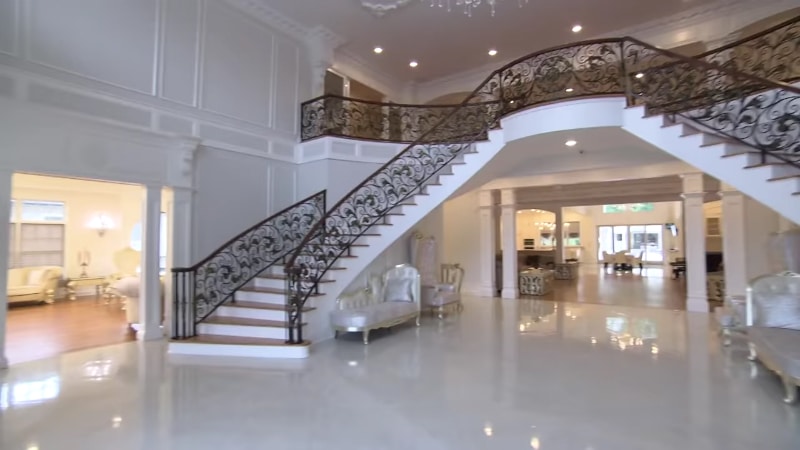 The home boasts a gorgeous kitchen with double marble islands, tons of gorgeous lighting and even a double oven. It’s a state of the art kitchen, which is perfect for Jennifer, who really loves to cook. In fact, before appearing on RHONJ, Jennifer Aydin had her own Turkish cooking show that can be viewed on YouTube.

Jennifer shows off most of the expansive home, even giving RHONJ viewers a look at her closet, which is stuffed full of designer clothes, shoes and purses.

The rest of the new Real Housewives of New Jersey star’s home can be seen in the tour below:

With such a huge home and so many entertainment options inside, it’s a wonder that Jennifer or her family have time for anything else. She can go from having an in-home spa day to playing some basketball on a whim. Then, to relax, it’s off to the state-of-the-art theater to catch a movie.

Jennifer and Bill Aydin’s home is truly impressive and may be one of the nicest homes of all the RHONJ stars. It looks like Jennifer has been a great addition to the Bravo series and we look forward to seeing what else she brings to the table on Season 9.

Real Housewives of New Jersey airs on Wednesdays at 9/8c on Bravo.

Joe Giudice gets chest tattoo in honor of daughters