The lights go out for Foyle’s War shortly ending the 13-year run of one of Britain’s most popular television mystery series. The show about a DCS Christopher Foyle investigating murders in the south of England during World War 11 is apparently running out of gas now that the war’s over. 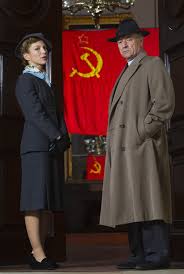 Foyle joins MI5 and transfers to London, but post-war isn’t cutting it for the creators. Michael Kitchen, who plays Foyle, and the show’s creator Anthony Horowitz director say they’ve run out of ideas, an inglorious ending to what has been a crowing jewel in British television. The good news is that Horowitz is writing the new James bond novel and a second Sherlock Holmes novel.

Even so, he recognises that “It feels a terrible wrench to say goodbye to characters I’ve lived with for more than fifteen years but the truth is that I’m not sure there are any more stories to tell and anyway it was always my intention to end on a high note and I think this year’s episodes are the very best we’ve done. I’m proud of what we’ve achieved with Foyle’s War and I’m very grateful to the audience that has stayed with us for so long. I’ve had a good war.”

The final series, inspired by real events, is set in London, 1946, finds Foyle in the thick of simmering international antagonisms that will lead to the Cold War. His stalwart assistant Sam (Honeysuckle Weeks) is by his side, pregnant but determined to do her best for as long as possible. Life in England following the war is tough, London’s flattening by Hitler’s bombs, there’s no money and the people have taken a deep psychological blow. 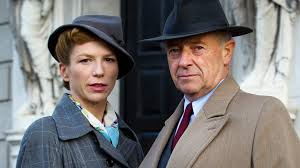 Despite Horowitz’ concerns, there is plenty to chew on post-war. Foyle is called upon to investigate the murder if a Nuremberg Trials translator which is tied to international oil interests and Nazi businessmen. A young man is brutally attacked during the national debate on the founding of a Jewish state within Palestine, as the spectre of anti-Semitism grows. An assassination attempts on Hilda Pierce’s could be tied into the deaths of SOE agents in Europe. 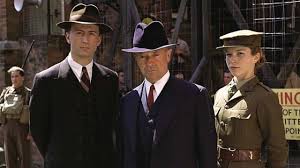 Public television will begin broadcasting the shows in May.