A string of fans have slammed the new choreographer Laureiann Gibson on Dance Moms over the quality of the routines she’s giving to the dancers.

Many have also begged for the return of former ALDC choreographer Gianna Martello, who announced she was leaving the show earlier in the summer, and Abby Lee Miller, who is currently in prison.

Gibson was brought in after Abby got put behind bars for financial crimes. She has previously worked with a string of top artists including Michael Jackson, Lady Gaga, Beyonce, Nicki Minaj and Alicia Keys.

But fans have recently been taking to the Dance Moms Facebook page to complain about the routines that the dancers have been putting on during her time on the Lifetime show.

After a video was posted last week of ALDC member Camryn Harris performing a solo routine, some fans said the choreography was not “ALDC quality” and “awful”.

"Weight Of The World"

Another video was posted at the weekend of the “Judgement Day” routine.

One fan said: “This might have been the single handed most ridiculous and pointless routine ever done at ALDC. Give the choreography back to Gia!”

The comment had more than 600 likes at the time of writing.

Meanwhile, a preview for this week’s show, below, showed two of the moms fighting and captured footage of Laurieann grabbing her head and shouting: “I’m in a lion’s cage”.

The video prompted some fans to call for Gia and Abby to return, predicting the ALDC would suffer if they didn’t come back soon. 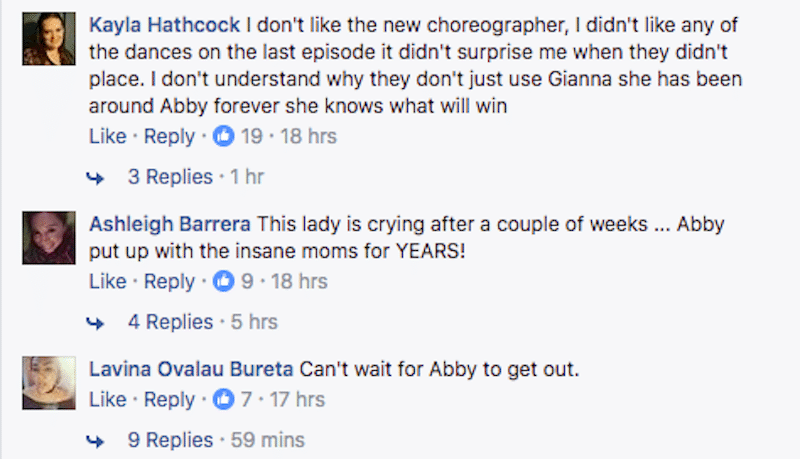 Abby is currently serving a 366-day jail term at the Federal Correctional Complex in Victorville, CA, which she started on July 12.

It came after she pleaded guilty to fraud charges in June last year. Gia left earlier this year saying she thought it was “time”, but hinted that she might one day return.

This week’s episode of Dance Moms sees Laurieann push the girls in a bid to get them to do “professional-level” choreography.

Mewanwhile, Kalani and Brynn go up against each other in solos and the two moms fight after an issue is raised by a group routine.

When Abby's away things get a little cray.

Dance Moms’ Abby Lee Miller gets a facelift and shares a health...