Married at First Sight fans have slammed Heather after she and Derek decided to get a divorce — saying she has “wasted” the show’s time.

Many viewers believe Heather was never committed to the experiment on which the show is based, which tries to have couples live a happy marriage after being married as strangers.

And they say she should never have taken part, but instead given her place to someone who was willing to try hard to make it work.

Fans took to the Married At First Sight Facebook page to express their anger after last week’s episode saw the pair finally decide to go for a divorce.

This week’s episode sees the couples visit their in-laws on Mother Day, but also includes segments with Heather and Derek.

A new clip from this week’s episode shows Heather facing up to the truth of how people see her.

But fan Kristie N Alfredo Macedo said: “Heather is pathetic ! She wasted the shows time and a spot for someone who’d like to actually give love a chance ! Quit showing her please.”

Many responded by saying they actually now fastforward the parts of the show where Heather comes on. 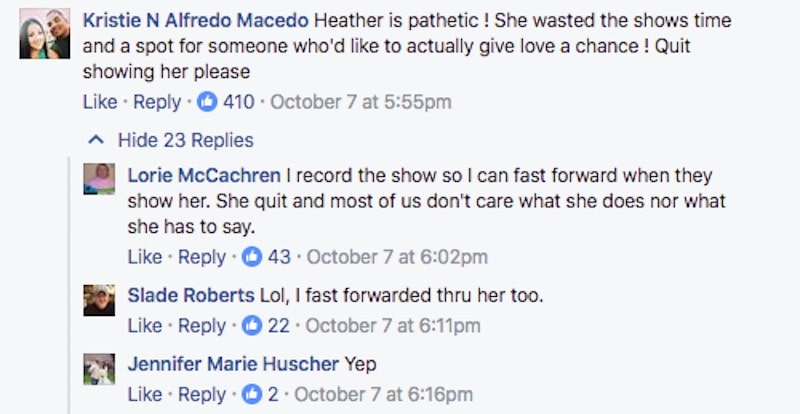 She said: “Why is she still on this show! She wanted a divorce, ok fine, be gone! She’s the type who will be alone forever. No ones putting a ring on it anytime soon for her…”

And Lorie McCachren said she had unrealistic expectations, and branded her “condescending and rude”.

Others said producers should now remove Heather and Derek from the show as the experiment was over.

Pina Carasi called Heather “Pretentious and rude.” She added: “Get rid of her. This is suppose to be about love and commitment. She needs therapy not marriage.”

But not everyone was against her. Cathy Messina said: “Well, I like Heather and understood completely why she didn’t want to be with Derek. I applaud her for not playing the game and sticking it out when she knew this guy wasn’t for her.”

Also on this week’s Married At First Sight, will Sonia move back in with Nick after their troubled last couple of weeks?