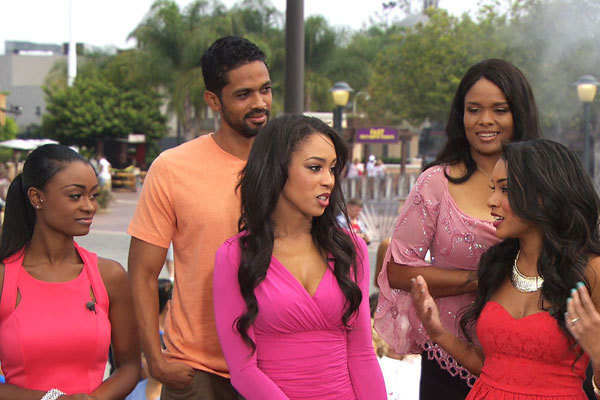 TMZ’s Harvey Levin has a social experimental show called “Famous in 12” where a fame-seeking family is filmed around the clock on their journey to achieve fame.

Every week we see what the family was doing the previous week, so it’s almost in real-time. How awesome would it be if we were able to watch them live? That might actually boost ratings.

The show follows the Artiaga family, a family from Beaumont, CA. They want to prove that they can be the next “Kardashian Klan,” or achieve just as much fame.

Here is the rundown on the family; Angie the mom, Mike the DJ and dad, and three daughters Maariyah (the singer and virgin), Taliah (the dancer), and Jameelah (the model). When I first heard about the show I immediately thought that it could work. I mean we do live in a digital and social world, but with the right family. You have to have personality, talent, social skills, drive, and connections to really survive Hollywood.

Each week, the Artiaga’s are given leads on Hollywood hot spots where they can get an opportunity to be seen and make connections. The three girls; Maariyah, Taliah, and Jameelah have gotten clever with some of their “scheming” (as Harvey calls it), like when they jumped in to shield Shelly Sterling from the paparazzi, but they are still lacking that “it” factor, and focusing on the wrong things to achieve fame.

Let me explain! The girls are constantly mentioning that they want to be bigger and more famous than the Kardashians, but they are not putting enough effort to achieving an ounce of the Kardashian fame.

Love them or hate them Kris Jenner had a strategy and it worked. Angie Artiaga does not have a strategy which is why their fame meter is just at 58% after three weeks. I’m not going to sit here and say everything that is wrong with the Artiaga family, but I am going to offer up some tips that they should take into consideration when approaching fame.

With nine weeks left the Artiaga’s would be smart to takes some advice and use it to their advantage.

Angie Artiaga: As the momager it is important for her to watch episodes of Keeping Up with the Kardashians and figure out what Kris Jenner’s strategy is. Angie should be thinking “brand” and not just fame. The Kardashians are a brand and if the Artiaga’s want a household name then its imperative that they create the Artiaga brand. As a momager Angie needs to do research. If Harvey gives a lead on a popular nightclub, or red carpet event, it is Angie’s job to find out how to get her daughters/clients on the guest list or the red carpet.

There is no reason the girls should be standing outside a popular nightclub hoping to piggyback behind Soulja Boy or lingering around the bouncer trying to get it. Angie has to be more proactive. She was standing out there waiting just like the girls while they did all the work. Angie needs to be be more firm and have more confident in herself and her girls. Angie needs to be more proactive in the careers of the girls and Mike. Yes, fame isn’t just about talent, but when you have talent that goes a long way. Each week, we see them doing whatever it takes to be seen, but what about their talent?

Mike: So on the last episode Harvey sets up a meeting for Mike to meet with SBE general manager Todd Barnes, who eventually gives Mike a 20 minute set at the popular gay nightclub The Abbey(If you are not familiar with SBE do your research). His set was a success, but he is far from the “world-famous DJ” that he wants to be. Mike has to stop being nervous and shy. He has to get out there and knock down doors. Demand more opportunities and get out there and network. Keep in contact with Todd and see about getting another 20 minute set at The Abbey, and maybe 20 minutes at another popular nightclub. A huge tip for Mike would be to go to the hot spots and see what all the other DJ’s are spinning and see the crowds reaction. This gives him an idea of what Hollywood’s partygoers like. As Mike’s manager, Angie did great being there at the meeting with Todd and jumping in when he was clearly stumbling on his words and not knowing what to say, but that isn’t enough. Angie needs a strategy.

Maariyah: What we know about Maariyah is that she is 19 years old, a virgin, and she sings. Being a virgin is great and all, but is that your talent? If Maariyah is a singer then we need to see her singing. She should be in the studio or have a demo to promote. Just like Angie should be working for Maariyah, Maariyah needs to be working for herself as well. Maariyah needs a Youtube channel to sing covers of popular songs and original songs. Let people see your talent. Maariyah is the most liked so she should be using that to her advantage.

Taliah: We know that Taliah is 26 years old, has a son, and dances. Knowing that Taliah has a son you would think that she would be more proactive with her career. Taliah should be at the Edge Performing Arts Center, or Millenium Dance Complex dancing with the best, rubbing shoulders with the best, going on auditions, and getting her face out there. Showcase your talent while seeking fame. Taliah too should have a Youtube channel showing off her dancing skills for the world to see.

Jameelah: Now we have the 22 year old model and the most hated on the show according to social media. Jammelah comes off a little too strong. It’s clear that if they were compared to the Kardashians that she would be the “Kim” of the group. If Jameelah wants to survive in Hollywood she needs to think before she speaks, and get out there on model calls or whatever her talent really is. There are auditions and model calls going on everyday, what’s the excuse? Don’t just be the “selfie-centered” chick.

It is not enough for these girls to take photos with celebrities, as it is to having a strategy behind it. You don’t want to be known as the sisters who just show up to places and parties and take photos with celebrities, it’s about creating a name, a buzz, and showcasing your talents. My last tip is that the girls specifically are too wrapped up in just celebrities. On the last episode of Famous in 12 the girls went to a Masquerade party, but left because “there were no celebrities.” Reality check ladies, it is not just about the celebrities. There could have been a casting director, and assistant to a director, or someone behind the scenes that could have opened a door of opportunity. Harvey’s assistant attended the event who would have been the perfect person to make introductions.

The Artiaga family has the chance of a lifetime to make their mark in the entertainment industry which is why I will continue to tune in to see if Harvey’s social experiment works.

A side tip for the Artiaga’s, fake it until you make it, but don’t overdo it. If you want to be noticed at the Hollywood hotspots get a luxury rental and valet at the front of the venue so people will want to know who is in that car. From there you walk up confidently knowing that you are on the list.

Guest contributor Elissa ‘Elle’ Mirsky is the Editor-in-Chief of Bold Magazine, and author of Heels in the Kitchen: Fashionably Edible. She enjoys fashion, food, music, celebrity gossip, and wine!

Can You Ever Forgive Me? movie review: Deserve’s got nothing to do...

Who won POV on Big Brother today? Veto spoilers from BB21 feeds
Sign up for our TV newsletter!