Boy Band contestant Chance Perez left fans in tears last night after breaking down as he talked emotionally about his past.

The 19-year-old, from Seal Beach, CA, wept as he talked about splitting from the mother of his child while his group Reverb practiced in the choreography studio.

He also talked about how his father died when he was just eight years old.

Read: 5 things you need to know about ABC’s Boy Band

He said of his daughter Brooklyn’s mom: “When we split I didn’t really let myself feel anything, and I just kind of accepted that it happened, and it took me two months to even try and do anything about it. And by that time it was too late. You know, I just kind of blocked that out.

“And it just made me think of all the things that have happened in my life, like my dad — he passed away when he was eight.”

Chance added in an interview with producers: “It feels good to let out the things that I’ve been bottling to myself, I didn’t even realise.”

“The experience in the choreo room was very emotional for me, but it was something that I really needed.

“Just that bonding experience makes you closer, and when you’re closer as a group, you perform better as a group.

“It’s not just about the notes, it’s about the feeling.”

Fans took to social media and YouTube to say how touched they were by his story, with many saying he was already their favorite on the competition.

Great episode of #BoyBand Chance got me all ready eyed this episode he is my favorite! Great job reverb on your performance @BoyBandABC

@ItsChancePerez Chance you're my favorite!! I'm a huge fan of yours and you killed it tonight! I'll be voting :D #BoyBand

CHANCE FROM BOYBAND IS SO BEAUTIFUL

Chance is killing my emotions right now! I feel so bad for him! #BoyBand 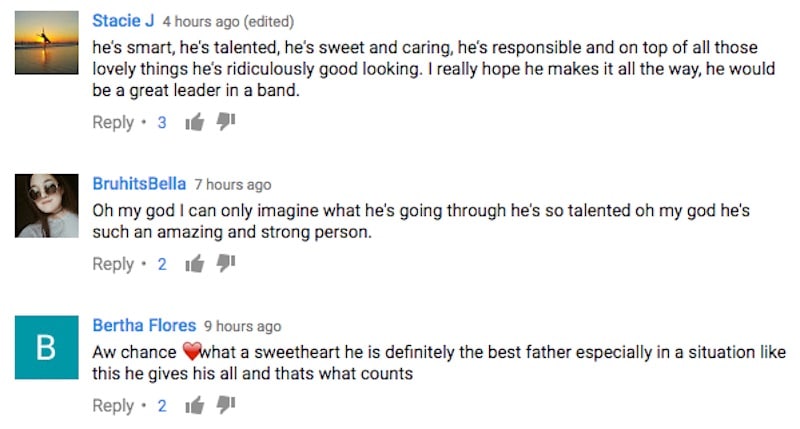 Though many fans’ hearts almost skipped a beat when they thought Chance was going to be up for elimination when the judges made him only the fourth person to be saved.

You guys had me nervous with Chance! #boyband

If it was Chance it was going to be my first and last time watching. #BoyBand

Watch Chance break down in tears as his emotions come out in the clip below:

He also talked about his daughter Brooklyn in a conversation with Emma Bunton and the other members of Reverb by the pool.

Revealing he was feeling homesick, he added: “It’s really hard being away from your child for so long.”

Don’t miss Reverb’s performance in the clip below: