Hello again, friends of History’s amazing show Alone! The premiere does not disappoint as we get to know a few of the teams. In this episode, you will witness one team collapse like a house of cards and one team shine like a copper penny.

I lead with a quote from #TeamAwesome which is Team Whipple. “There’s always something out there that can kill you…” says Brooke Whipple, Alone season 4 sole female, mama bear, wife to Dave, mushroom aficionado and ass-kicker extraordinaire.

The show opener quote from Hunter S. Thompson sets the tone as we watch the teams dropped onto verdant, chilly and wet Vancouver Island. 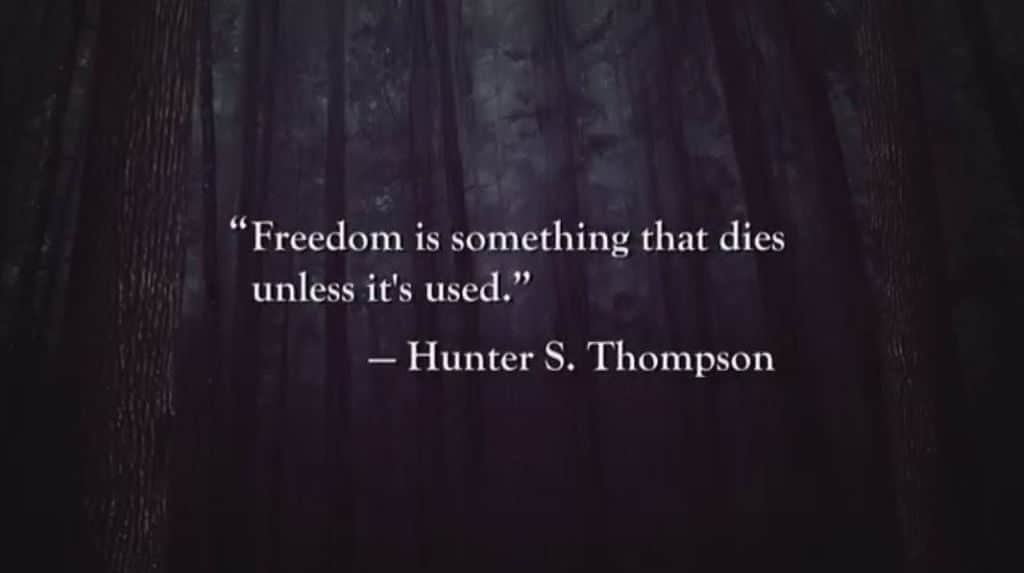 As fans know, the twist this particular season is that seven pairs of family members (in teams of two) are dropped well apart from each other. They must survive with one hiking through the wilderness to their other team member, tasked with building their permanent shelter.

Unlike Patagonia, Vancouver Island has WAY more predators to concern oneself with, such as black bears, cougars, wolves, and spiders.

We open with Team Whipple, an experienced off-the-grid couple who are experts at all things au natural. Dave and Brooke Whipple instantly seem to grasp the mission and luck out with a good spot.

Armed with a compass, Dave sets out to find his wife Brooke who is busy soaking up her new reality with gusto.

Meanwhile, Illinois natives Team Richardson are brothers Brad and Josh are dropped. Brad has his trusty compass and sets out in a thick forest full of predators. Western coastal native plant Salal is hampering his hike, we learn.  About 10.3 miles away is brother Josh. He has a coastal ocean POV and high hopes.

We switch back to Team Whipple. Brooke is the one designated to create the camp while Dave makes his way to her. She lands on a rocky beach ecstatically yelling: “freedom.”

Then she finds Chanterelle mushrooms, fresh water and conifer tree pitch for the fire right off the bat!

Her beach is lovely except for the lone Vancouver Island wolf making his way to her.

Eye to eye, she whispers to us as she films this encounter. Wolfie makes his way to her.

“Oh sh**” she says and yells at the curious animal in hopes to scare him off. All she has to protect herself is bear spray, as she contemplates the reality of cougars, bear, and wolves being in her space.

Over in another section, we meet up with Downeast Mainers father-son Team Ribar, a rugged no B.S. former military man, Alex, who appears to be in a rugged brush and marsh.

This experienced hunter comes up on a BIG pile of bear scat.

Alex is trying to find his 19-year-old son Logan who will be tasked with making their basecamp. “This is going to be a pinnacle point in my life as a father and a man,” says Alex of this adventure.

Cutaway, we meet Team Bosdell ‘s Jesse finding turkey tail mushrooms. These are what he calls “decomposing mushrooms”, and are a “good find.” He is trekking to find brother Shannon who will establish their shelter. He happens upon a well-used bear trail which has him thinking.

A suspect noise stops him in his tracks. He talks loudly to keep from startling a bear which is quite dangerous for hikers. If you are about in nature, you need to be noisy.

Back with Team Richardson’s Brad who is hiking and he is soaked. He’s worried he won’t find a dry place to sleep tonight. Timing is critical as he needs to secure shelter but still make headway in search for his brother.

He finds a dry spot and makes peace with the less-than-ideal locale as he discovers a widow-maker dead tree right by his shelter. The wind is fierce and always a threat. He must remove it and he does.

However, 9.7 miles away, his brother, 19-year-old Josh is nearer to the sea as he mucks through heavy brush to set up camp. He has hiked in about an hour from the beach and is like the other Alone contestants, his camera has dirt and water on the lens so it’s hard to see.

Then, a real calamity strikes Team Richardson.  Josh suddenly twists his ankle with his foot slipping and becoming wedged under a log. Not broken but stinging, he decides to head back to the beach with a sprained ankle. “This hurts like hell!” he says as the disorientation and pain sets in.

We head over to Team Ribar as Logan is also drenched in rain. He says: “I don’t know how you find anyone out here.” Logan follows a game trail with little clearing and then finds a flat spot to erect a makeshift tarp tent. “I wish my dad was here,” he laments.

Day One ends with Team Richardson’s Josh surveying the water. He’s fighting his mindset, and mentally he doubts he can do this challenge.

And as predicted from his on camera footage, Josh taps out on the first day. His brother Brad is let down.

Hearing the approaching helicopter, Brad puts it together something is up and he appears to have mixed emotions on camera. Of course, he is happy Josh is okay but disappointed they never really got a footing in the competition.

He says: “I was definitely in this for the long run, so it’s tough, I had high hopes for this place.”

Team Whipple’s Brooke, however, is chatting with bald eagles, braving wolves and meeting curious little salamanders with pluck and cheer.

Putting the finishing touches on her mini log cabin, Brooke says: “I want that dear man [Dave] to have a place to lay down his head and be comfortable.”  She, my naturalist friends, is what they call a keeper!

We close out with Logan and Alex of Team Ribar. It’s now nighttime of Alone’s Day One and in Logan’s encampment, we hear a bear noise. It IS a freaking bear nosing about with two glowing eyes caught on film!

Cut to the end credits and we see the next episode teased, as another team looks to tap out too… which if so will leave just five teams left at the end of the second episode. Gnarly!