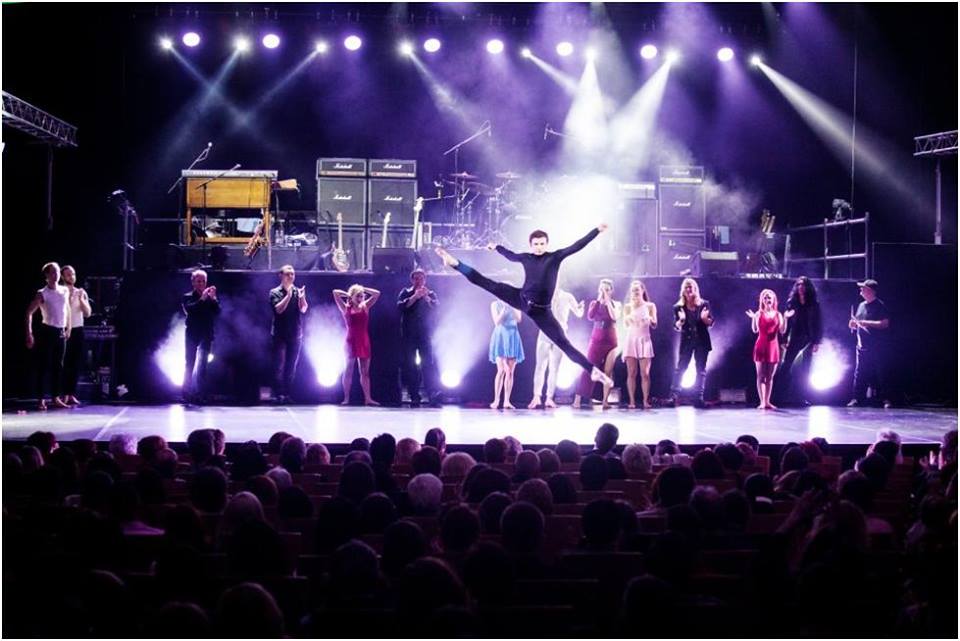 Arriving at the historic Orpheum theater in Downtown LA on a breezy Wednesday, I’m escorted through the back and across the stage to meet with the band behind Heart of Storm, a new experimental show that pairs top-notch rock musicians with a talented Russian ballet troupe.

I’m a little skeptical at first, but it becomes immediately clear that everyone involved in the project is passionate about bringing a fresh blend of art and cultures to the stage. After interviewing the band,  I strapped myself in for the show.

Opening with an ethereal, Pink Floyd inspired jam, the show took off with moody lighting that began to build with the music before exploding in a wash of white light, exposing all the dancers that had crept onto the stage through the dark. The show’s pacing was graceful, smoothly moving from ambient, textural pieces to jazz, hard rock, heavy, symphonic classical and catchy pop, all being performed by an incredibly tight band.

The show was artfully balanced between the live band and the ballet, with each piece feeding off the next, making for a fully realized experience. Each performer, both musicians and dancers were equally featured without ever coming off as clumsy or showy, with each bit serving the overall performance. Both musicians and dancers would have sparse solo spots, while other scenes featured the ensemble in full force–making for a varied and dynamic show that, despite its lack of lyrics to guide the narrative, held my attention the whole time.

As far as the story is concerned, there are repeating, relatable themes, lead characters and a satisfying arc, though it never gets in the way of the music or movement which is, as far as I’m concerned, the main feature here. The stage show itself is minimal, relying on a few, carefully selected props and lights to create a diverse range of scenes and emotions. The few tricks they pull are old-school and incredible–relying on cloth and projections with some amazing results.

It was refreshing to see a spectacle that relied on pure human talent rather than big explosions or elaborate costumes to inspire awe and emotion. As it was a dress rehearsal, I was able to sit front and center, allowing me to capture the expressions of the dancers, which alone worked wonderfully to capture the characters and story. While I’m not sure if these minute details would be visible from the balcony, it wouldn’t hinder the show–it just proved how invested the dancers were in their art, the story and the overall show. I am very excited to see how the performers can engage a full audience rather than a handful of people from the press, as it’s always difficult to gauge a performance without an audience’s energy.

That said, it was an engaging piece, and the use of rock rather than classical instrumentation allowed the dancers, under the direction of skilled Russian-Korean choreographer Stas Tsoy, to explore new ground for what is a generally gentle art. While the beauty of traditional ballet was never lost, the music allowed Tsoy to incorporate elements of modern dance along with sexy, aggressive and playful poses that are often missing from classical ballet.

All in all, Heart of Storm is an exciting and engaging performance that relies on the talent of the players to make a great show. It’s simple yet elegant, modern yet timeless, with a full array of emotions, music, acrobatics, energy and intimacy. Given the gorgeous venue, complimentary tickets and the fact that all donations go to a worthwhile charity (Jay Nolan Community Services), I can see no reason not to attend the US debut of Heart of Storm.

This is a generous opportunity to witness gorgeous choreography and one of the tightest bands in recent memory. The show debuts this weekend for two nights only (7/24-25) at The Orpheum Theater in Downtown, so be sure to reserve your tickets via email at tickets@redrockballet.com or through their website.

The Rising Of The Shield Hero Season 3 release date: Tate no...

Murder of Chris Reagan: Did Kelly Cochran serve his remains at a...

sMOTHERED on TLC: This mom and daughter share the same BED!