A deliciously deviant romp into sexual adventure grounded in the real life struggle for enduring intimacy. 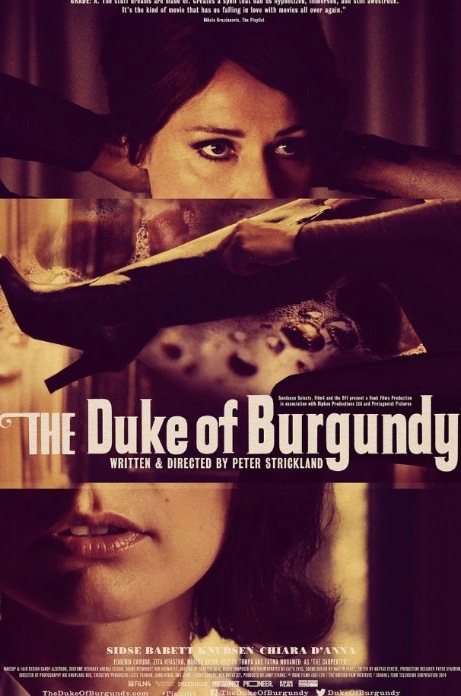 Peter Strickland’s film shows nothing if not a lot of courage. The screenplay reflects on the seemingly Victorian experiences of two sexually liberated and experimentally inclined women against a backdrop of heavily disciplined and constrained academic isolation.

Evelyn (“Berberian” star Chiara D’Anna) and Cynthia (Danish actress Sidse Babett Knudsen) share a very comfortable mansion in the lush green countryside. We never know the location, but it appears to be a wealthy part of, perhaps, England. The actual shooting was done in Hungary, where Strickland resides.

Cynthia is the middle-aged mistress of the house. She organizes and moderates a series of lectures about obscure and esoteric research into moths and butterflies. Evelyn is her twenty-something year old, female, lover. As the film opens, Evelyn approaches the back door of the foreboding mansion and proceeds with what appear to routine housekeeping duties. In time the story reveals that these duties are part of an elaborate sexual fantasy which the two have worked out in fine detail.

An arcane series of scientific lectures are interspersed within the lives of the two. It appears the characters in the film (all female) are either rich spinsters or spouses of alpha males, left to the few pursuits considered safe and dignified. The screenplay deliberately blurs the line between fantasy and reality in the lives of the two women. During the pompous and constrained lectures within the richly paneled halls of the library the camera scans the audience. One side is older women, similar in age and bearing to Cynthia. On the other side are hilariously young and pretty younger women such as Evelyn. To complete this bizarre scene, scattered here and there are manikins, their poise and stature rivaling that of the real life females taking part in the lecture.

Guests come and go from the house, including a woman who designs custom beds that constrain and hold the mock victim in place. There are debates about the schedule for delivering the bed and options reviewed that include substituting a “human toilet” instead, the latter being less on demand and having a shorter delivery time. There is only one neighbor in the film. Although in the beginning we do not understand why she steadfastly snubs the two protagonists, by the end of the film that, at least, becomes clear.

The time period of the story is, like the moths, up in the air. The sets and costumes are Victorian, but in the first half of the film it is delightfully unclear if the story takes place in the present time, fully costumed, or one hundred years in the past. This is part and parcel of the fantasy that director (and screenwriter) Strickland lays at our door.

The story develops cracks that begin in the couple’s relationship. This includes the couple’s efforts at renewal which includes the consultation with the custom fetish-bed carpenter. The viewer’s confusion at which acts are fantasies and which are real mirrors the emotional confusion that saturates every intimate relationship. Each of the two lovers is never quite sure what the other wants or what they want. Society is no help, consisting of a circle of friends that have the emotions and mannerisms of manikins and an extensive collection of moths (dead, of course).

Although the film comes close to being an IQ test for the viewer, it is hard to criticize it as dishonest or self-centered. The film maker readily shows his cards as the story is told. Even so, the behaviors of the characters do not seem to fit quite right into any physical setting or historical mode of behavior. It is more an experimental story of what might have been and, perhaps, what could be.