The intense, richly detailed limited series New Worlds looks to the late 1600s, the turbulent Restoration period and the simultaneous settling and colonisation of America, the new world. It shows in its limited scope, why these events were happening at the same time, how it affected the political and religious refugees to America, the native population and the British ruling class. It’s an ambitious story weaving personal and political events in England and the New World into an effective dramatic whole. Through personal stories of a rather large cast it becomes clear why great numbers fled tyranny in England for new tyranny in America.

Charles 11 (Jeremy Northam) ruled during the Restoration, which brought Ireland and Scotland back under British law. Its effects were felt in America where the white population consisted of anti-war Puritans, English rebels and refugees and the officers from England hunting for them. Back home, Irish and Scottish rebels fought the English aristocracy in small bands of grass roots rebellion.
One of the leaders of the rebel movement was Abe Goffe, played by Fifty Shades of Grey’s Jamie Dornan. If that film / performance was lacklustre, Dornan is out of the woods now, literally and figuratively. He can hold his head up thanks to New Worlds. He’s a romantic hero with all that means – strong, resilient, fair, a strategic thinker and catnip to women. His tragedy is that his beloved Beth Fanshawe (Freya Mavor) has flown the coop to America.
Fanshawe is shipwrecked on the Massachusetts shore and taken in by natives with whom she lives happily for many years. She marries Joseph (Billy Howle), a tribe leader and has a child with him and respects and loves their traditions and way of life. But white bounty hunters kill him and she is abandoned by her new family. They take and hide her child for his own safety so it is unlikely that she will ever see him again. 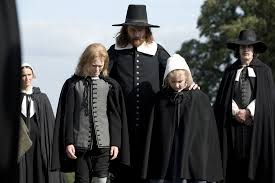 This is where the action ramps up in the parallel worlds. We follow our characters for decades as they make their way through history and the world heaves itself into a new shape. It was a deadly legacy.
Charles 11 fails to bring the peace he promised to the UK instead bringing his own violent and corrupt tyranny to bear. Those political refugees from British tyranny in the new world are slaughtering Native Americans. It’s a brutal new world that foreshadows America’s labour pains, some of which continue to today. 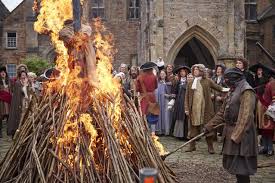 The series is beautifully shot and directed. The double story is tricky but well-handled and well-paced. There’s a lot of information shaped into a cohesive and entertaining whole and a lot of characters whose paths are constantly crossing in the ebb and flow of this new life. Period details are intriguing and thorough and the music score is otherworldly.