The ladies carry diamonds and bring a lot of sass, in what is arguably the most prestigious Real Housewives franchise, fans love to watch the luxurious lifestyles of the cast of the Real Housewives of Beverly Hills.

RHOBH premiered a decade ago and Season 10 just finished airing as the three-part reunion wrapped up in September of this year.  Season 11 reportedly began filming in October and while we haven’t been able to find out too many details, fans can expect the extravagance they’re typically accustomed to.

In anticipation of Season 11, which Bravo has yet to officially announce a premiere date for, we’ve ranked the season 10 cast to see who is the richest of the RHOBH stars.  With net worths ranging from $8 million to $100 million, these housewives have plenty of money to play with. 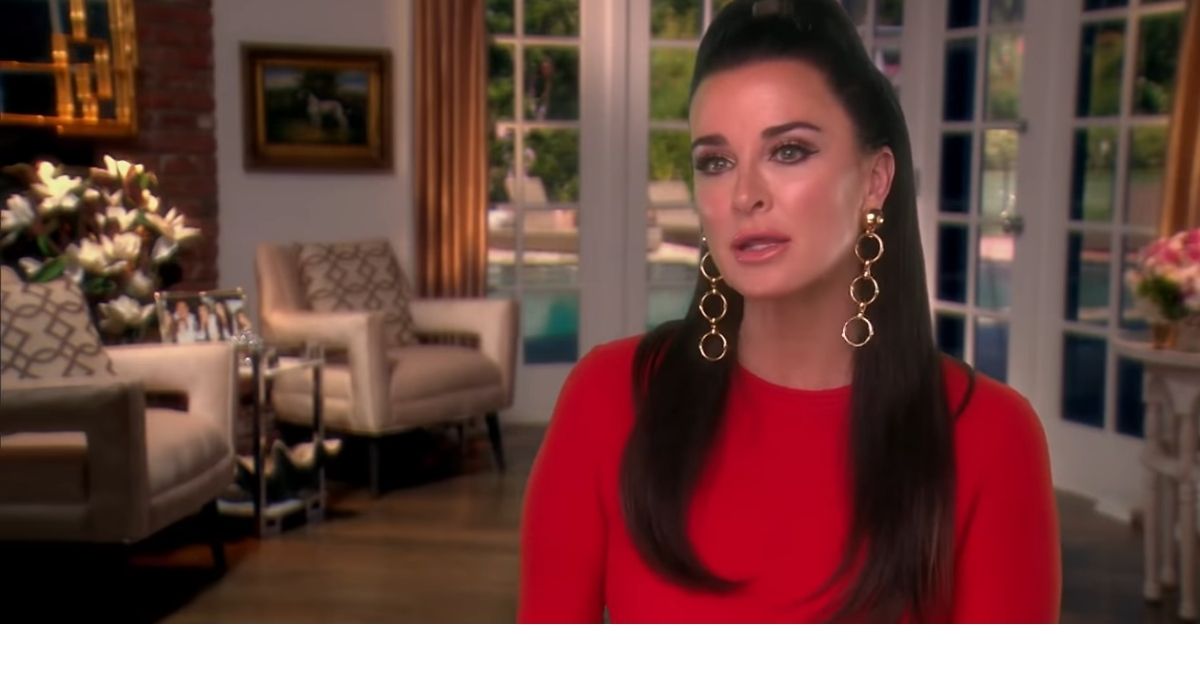 As if we couldn't love him more, single-dad/Bachelorette final four, Michael A. took to his ...

As if we couldn't love him more, single-dad/Bachelorette final four, Michael A. took to his Instagram recently to clarify a statement he made on The Bachelorette. 🌹⁠
⁠
See his video where he shares his "quick but important" message at our #linkinbio. He is also sporting a fuller beard and mustache, which looks nice on him! ⁠
⁠
We didn't need the clarification, Michael, but kudos to you for doing it. ❤️⁠
⁠
(📸: michael_alliol4/Instagram)⁠
------------------------⁠
#thebachelorette #katiethurston #bachelorettemonday #michaelallio #singledad #ittakesavillage #clarification #sweetmessage #masculinity #bachelorettefinalfour #bachelornation #bachelornation🌹 #thebacheloretteabc #hometowns #abc #pickhim #goodguy #niceguy #greatdad #inlaws #supportsystem #support ...

According to Celebrity Net Worth, Kyle Richard’s net worth clocks in at a whopping $100 million making her one of the richest housewives in all of the Bravo franchises.  Just how did she make her millions?

Kyle is married to Mauricio Umansky who is the CEO of The Agency, a highly successful real estate company.  While her husband does well for himself, Kyle has gainfully contributed to the couple’s fortune.

She was a child actress at the age of four when she starred in the Disney movie Escape to Witch Mountain.  Other films and shows Kyle’s been in include Halloween, Little House on the Prairie, Down to Earth and E.R.

She recently started her own clothing like called KYLE + SHAHIDA.  The line did well after it was shown off during New York Fashion Week in 2019.

Aside from RHOBH, Kyle has made appearances on other reality tv shows including Vanderpump Rules, Keeping Up With The Kardashians and The New Celebrity Apprentice.

As if all of her acting and business ventures weren’t enough, Kyle is reportedly paid $270,000 per season of RHOBH.

Dorit Kemsley’s bank account is quite impressive as the star has an estimated net worth of $50 million according to Celebrity Net Worth, making her the second richest housewife on RHOBH.

Dorit is married to Paul Kemsley, who she met while living in New York.

Paul is a celebrity manager and works with stars like Boy George, who’s been known to live with the couple periodically.  Paul is also a successful real estate developer.

Dorit and her husband were forced to file for bankruptcy in 2018 when Paul had collected $3.6 million in gambling debt.  The couple has managed to recover and overcome their financial burdens as they’ve continued to find success through various business ventures.

Her Beverly Beach by Dorit brand also includes athleisure wear and clothing for men. Despite previous money troubles and bankruptcy, Dorit still sits at the top of the list as one of the richest housewives of the Beverly Hills franchise.

According to Celebrity Net Worth, Erika Girardi, also known as Erika Jayne, is worth an estimated $15 million.  Part of her fortune is attributed to her acting and singing career.

She has had six number one songs on the Billboard Dance Charts.

Erika recently split from her husband Tom Girardi.  The couple had been married since 1999 after only six months of dating.

According to US Weekly, recently obtained court documents noted that irreconcilable differences was cited as the reason for the split and Erika had requested spousal support.  In addition, Erika requested that Tom pay her attorney fees and that he not be allowed to seek spousal support from her.

It’s unclear how the divorce will impact Erika’s income but it looks like she won’t have much to worry about.

Teddi Mellencamp rings in as the fourth richest housewife in the RHOBH toting a net worth of about $12 million according to Celebrity Net Worth.

She turned her passion as a nutrition and fitness trainer into a multi million dollar wellness company.  She offers services as an accountability coach on her website All In By Teddi.

While the business has been successful, there was recent controversy over her fitness plans safety.  Critics claimed the exercise routines were unsafe and the nutrition plan mimicked a starvation diet.

Despite the controversy, her business has remained successful.

In light of her own successes, Teddi owes some of her fortune to her husband Edwin Arrovaye.

According to Bustle, In 2004, Edwin founded Skyline Security Management, Inc., and he’s been the CEO ever since. The company sells automated remote security systems in over 30 states across the country.

Teddi and her husband have made a name for themselves through their successful business ventures, but Teddi is also well known due to her famous father.  Teddi is the daughter of famous musician John Mellencamp.

She was recently let go by Bravo after three seasons of filming.

Denise Richards is tied with Teddi Mellencamp as the fourth richest star in the franchise with an estimated net worth of $12 million according to Celebrity Net Worth.

Denise made her fortune from being a television and movie star.  She appeared in several well-known shows including Saved by the Bell, Married with Children, Seinfeld, Friends, Spin City and Beverly Hills 90210.

Some of the well-known movies she appeared in include Starship Troopers, Wild Things, The World is Not Enough, Scary Movie 3 and Drop Dead Gorgeous.  She continues to star in the soap opera The Bold and the Beautiful.

Denise recently announced her departure from the RHOBH franchise after two seasons of filming.  Denise’s final season on the show was filled with drama over the topic of threesomes that was brought up at a family cookout that her children attended and accusations that she had an affair with Brandi Glanville.

While Denise won’t be returning for Season 11, fans will still be able to watch her on television and the big screen as she continues on with her acting career.

While she may not be one of the richest housewives on the franchise, Lisa Rinna still clocks in with an impressive net worth of $10 million according to Celebrity Net Worth.

Prior to filming with RHOBH, Lisa spent over 20 years working as an actress.  In her younger years, she appeared in television commercials and had some modeling gigs.

Eventually, at just 24 years old, Lisa caught her big break with her role on the soap opera Days of Our Lives.  Lisa’s other big role which she is well known for came from her time filming the television drama Melrose Place.

Lisa has made several appearances on other well-known productions including Dancing with the Stars, All-Star Celebrity Apprentice, Entourage, and Sex, Lies and Obsession.

As if her acting career wasn’t successful enough, Lisa also received a Daytime Emmy Award after she became the co-host of Soap Talk.

To add to her success, Lisa’s fashion line Lisa Rinna Collection is sold on QVC and is described as “chic, comfortable, West Coast styles in bold colors and patterns”.

Lisa is married to Harry Hamlin, an actor who is well known for his appearances in the film Clash of the Titans, the television series L.A. Law, and Mad Men.  Rumors circulated this past summer that Harry was having an affair, however, Lisa shut that down quickly and the two appear to be doing well.

She may be at the bottom of the list of richest housewives of Beverly Hills but she still has a hefty bank account regardless.  Garcelle Beauvais is the sixth richest star of RHOBH with a net worth of $8 million according to Celebrity Net Worth.

Garcelle began modeling at the age of 17 and appeared in several ads for companies like Avon, Mary Kay and Clairol.  Following her modeling career, she dipped into acting and starred in several different TV shows and movies.

She is best known for her roles in NYPD Blue, The Jamie Foxx Show, Coming to America, Double Take, Wild Wild West, and Spider-Man: Homecoming.

Garcelle was married to talent agent Mike Nilon for nine years before their divorce was finalized in 2010.  Garcelle discovered her husband was having an affair after she found a series of text messages between him and another woman on his phone.

While she revealed she dated screenwriter Mike Elliot for a short period of time, Garcelle currently remains single.  Despite her recent bad luck with romance, it looks like Garcelle is doing just fine on her own.

The premiere date of Season 11 of The Real Housewives of Beverly Hills has yet to be announced but one thing is for certain, fans can’t wait to watch the extravagant lifestyles of these rich and famous women.