New Amsterdam’s third season begins with Dr. Iggy Frome and his colleagues grappling with how to heal their hospital after the turmoil of the pandemic when a plane crashes in the East River.

The team scrambles to save the lives of the many injured patients.

Dr. Fromme, played by Tyler Labine, races against the clock to help the pilot unravel the details of the accident while at the same time dealing with his ongoing mental health issues.

Like many prime-time television shows, NBC’s New Amsterdam has been on an extended hiatus due to coronavirus restrictions, and Labine, who loves to work and have his creative juices flow, is over the moon at being back on set.

“I am in a state of bliss after being off from the show from March 7 until the middle of October,” Labine exclusively told Monsters & Critics.

“It was great to be relegated to the house and spend time with my three young children, (sons ages 4 and 7, and 10-year-old daughter), at our home in Ojai, California,” he added, “but after a while, it can get a little crazy.

“I’m a workhorse, so coming back to New York and having a place to put my creative impulses has become very cathartic for me. I’ve found a way to put a lot of me into Iggy and vice versa.”

Labine spoke at length to Monster & Critics about how the writers plucked key parts of Labine’s own life to use in recent storylines for New Amsterdam, his appreciation for therapy, the great harm of body shaming, and why going back to work was “exciting to get back to both physically and spiritually.”

Monsters & Critics: Tyler, what was it like to go back to New Amsterdam after being off the set for nearly eight months?

Tyler Labine: I love everybody I work with – cast and crew — and it was great to see everyone again. We became a family shooting a show like this, so being separated from your other family for that long and wondering if you are ever going to get to see them all again; it was great.

M&C: Please talk about how Dr. Iggy has evolved. He strikes me as a pretty complicated guy as a doctor, family man, gay man, and a friend.

Tyler Labine: It’s actually been a pretty crazy evolution. And it’s one that I’m kind of just understanding myself. But even from the beginning of taking this character on when we started shooting the show, David Schulner was like, “Oh, and by the way, Iggy is gay, and he’s got four adopted kids and a husband.”

It was the first sort of interesting shift that I wanted to take into the show. In fact, I was adamant that we were not hanging our hat on having a coming-out episode or making a big deal that Iggy is gay. That’s not his defining characteristic.

We didn’t even mention it until episode five because it was really part of the plan of the evolution to sort of normalize and just have him be a guy.

M&C: How did you feel about playing a psychiatrist?

Tyler Labine: Playing a therapist was an interesting new kind of take for me. I’ve done a lot of comedy and my instinct, in the beginning, was that they wanted him to be goofy. But then they started throwing all of this really heavy stuff at me.

At first, I didn’t know how to do it because I didn’t trust myself. So, there’s been an evolution of learning to trust that I can be a good listener and a dramatic actor. 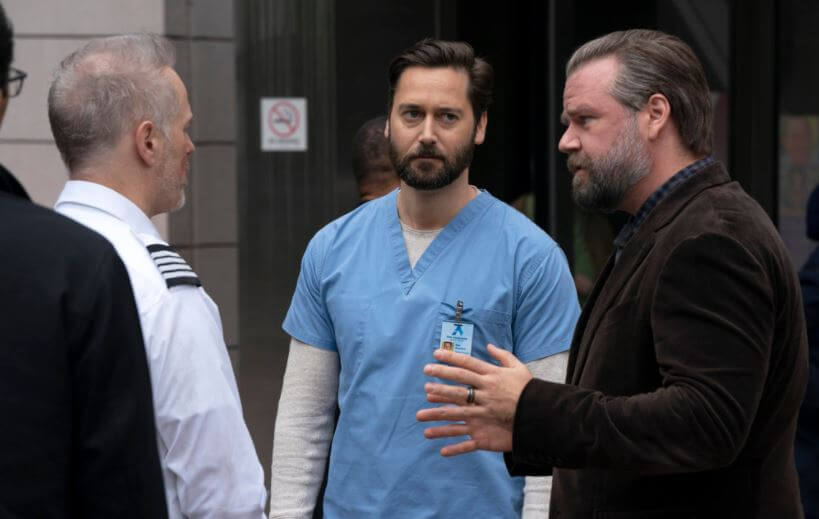 M&C: A major storyline for Dr. Iggy is wrestling his eating disorders, please talk about this hitting close to home for you.

Tyler Labine: I went to the writers after I saw that they were playing at some sort of a back burner that Iggy’s got some weird issues with food – like he’s eating some crudité one moment, and then he will have cupcakes in the drawer.

I said if we are going to do this, we need to do it full-on because I don’t want to make it some sort of half measure. Being the amazing writers and showrunner that they are, David Schulner said, “Tell us your experience.”

So, I literally gave them things right out of my life that are going to be in this new season, and we’re still shooting these episodes.

M&C: Is there a catharsis in being able to deal with these raw and highly emotional issues on screen?

Tyler Labine: It’s been a huge blessing in my life to play this character and being on the show. Yes, it has been cathartic for me to play Iggy. Hopefully, this character is going deeper and deeper, and he will be one of those characters on TV that people will be constantly discovering and seeing themselves in.

M&C: Why is this so important to you?

Tyler Labine: The discussion of mental health is personally important to me. I struggle with anxiety and depression, and I held that in for years as a comic actor. I think the world, in general, is becoming more open to a discussion about dropping the stigma of mental health issues, but it’s still there.

It’s taken a few key players to come out and say, “let’s talk about anxiety” and to come out there on the front lines and say they have anxiety and have had it for years. Other people started slowly raising their hands about this.

M& C: Do you see Dr. Iggy’s struggles as a teaching moment for families that may be dealing with these issues? So much of this starts as children with toxic messages from parents or other family members as we see in the new season.

Tyler Labine: That’s all from my life. We did what we could to make an entertainment TV show out of it. But even from my perspective when I saw my own story written into the script, and then I was there performing it in front of the camera and the crew, I was shaken up.

M&C: It sounds like you had a visceral reaction to making these very personal episodes in the new season.

Tyler Labine: I was upset and emotionally sort of raw and rocked by it. Because it’s a part of millions of people’s stories that it was an acceptable thing to feel like you’re less than because you have extra weight on your body or that you are weak or something is wrong with you.

Body shaming is a terrible epidemic in this culture. The messages we get are pervasive, and everywhere in this culture, so I think this story is going to touch a log of people.

I’ve had many guys, like dudes who I never thought would want to talk to me about any of this stuff, come up to me and say they are affected by it and needed to be able to talk about this without feeling less manly or less masculine.

So, I hope the message will really resonate with a lot of people because so many of us were fed that same line over the years. I love that we are unafraid to ask certain questions and leave them open-ended for discussion.

I just think it’s the idea of this battle that we have; this totally unnecessary battle with loving ourselves. And that sometimes our worth has been wrapped up in our weight, which is so sad and so unnecessary.

I felt so good after being able to tell that story that I went out and got a couple of tattoos. It’s baggage that we carry around.

M&C: Do you think that wrestling with all of these demons makes Dr. Iggy a more effective psychiatrist?

Tyler Labine: Yes, absolutely. Understanding the flaws and the fact that we are all dealing with demons makes therapists the most effective with patients because you can relate as people and not just ideas. 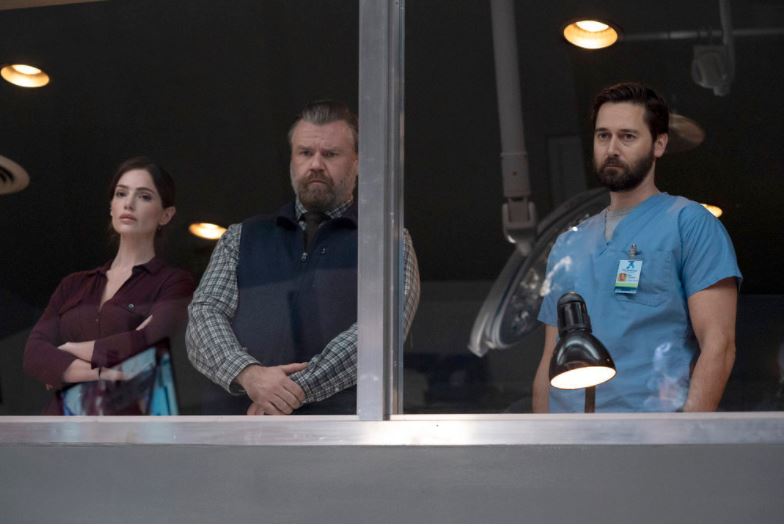 M&C: How did you stay in touch with your co-stars during COVID-19 isolation?

Tyler Labine: We stayed in touch via text, social media and spoke on the phone a few times. Jocko Sims [Dr. Floyd Reynolds] and I were in touch quite a bit. I am also pretty close with Janet Montgomery [Dr. Lauren Bloom].

It was such a weird experience during this pandemic lockdown and quarantine. I think a lot of us just kind of buried ourselves in whatever was immediately available to us.

For me, it was my family and homeschooling my kids. So, we stayed in touch, and we all knew we were coming back, which was an amazing blessing. But we all kind of took care of our own business.

Tyler Labine: I think that’s what the episode is trying to showcase; that there’s really no such thing as the “new normal.” Normal implies what we’ve become used to and what we’ve relied upon and expected.

There are no comforts. Even the comforts that I try to go back to from the past, like ordering food and watching movies, I find I can’t even do that the same anymore.

I think that the comforts that we looked for before in our lives are not going to be enjoyed in the same way or taken for granted the way that we did before.

M&C: Why do you think New Amsterdam continues to resonate with its viewers?

Tyler Labine: First of all, it’s TV and entertainment, but for a primetime show, it’s also pretty brave. It walks the line politically and emotionally and isn’t afraid to push buttons.

We’ve had some episodes that were divisive, but not in an offensive way, but in an inclusive way. It’s more from a place where people from all walks of life can come and feel like they are represented a little bit. I like that it always evokes conversation, which is a tool we all need so much.

I think it strikes a chord with a lot of people because I think everybody sees something of themselves in the characters and the show.

New Amsterdam airs on Tuesdays at 10/9c on NBC.