Who needs Valentine’s Day or watching The Notebook alone with wine and Chinese food to feel like love is dead? Our favorite Bachelor Nation couples just keep on splitting and leaving our hearts a cold, shattered mess in the process.

Some of the couples just seemed destined to be together, others were super cute in their Instagram photos, and for a few, we were able to watch their love story from start to finish.

It’s safe to say, Bachelor Nation is invested in these relationships and when they end, a little piece of us dies along with it.

But, no matter what, all we ask is that Saint Valentine doesn’t take away Sean Lowe and Catherine Giudici. Then, not only is love dead, but an asteroid must be headed toward Earth because life as we know it will be over.

We’re ranking the most upsetting Bachelor Nation splits, so get out your tissues and have your boxed wine ready.

Carly Waddell and Evan Bass met in 2016 during Season 3 of Bachelor in Paradise, as a seemingly unexpected pairing.

However, Carly first had to kiss a frog before finding her prince. During Season 2 of Bachelor in Paradise, she was left broken-hearted when Kirk DeWindt, whom she had coupled up with throughout the season, blindsided her by claiming they weren’t on the same page.

Fast forward to Season 3, and viewers were rooting for Carly to find her happy ending. Ironically, it was with Evan Bass, an erectile dysfunction expert. Though Carly wasn’t taken with Evan right away (who could forget that awful jalapeño kiss!?) she eventually opened up.

The pair married on the beach during Bachelor in Paradise Season 4 with Chris Harrison officiating, naturally. They’ve since welcomed a daughter, Bella, in 2018, and a son, Charlie, in 2019.

On December 23, 2020, Carly and Evan confirmed they were separating after months of speculation. In June, they appeared on the Mommies Tell All podcast, with Carly revealing they wouldn’t be having more kids. Carly claimed, “I don’t think we should because I’m tired,” and Evan tellingly chiming in, “I don’t think we’d make it if we had another.”

Odds are, Evan got an earful during couples counseling after that comment.

Becca Kufrin had her heart broken by Arie Luyendyk Jr. when he dumped her to go back to his runner-up, Lauren Burnham. It was a brutal, televised breakup that Bachelor producers previewed and hyped up like it was the Olympic Games.

Becca wiped off her mascara, donned a new dress, and took her rightful place as the next lead of The Bachelorette in 2018. Viewers watched the love story between Becca and Garrett Yrigoyen play out, all leading to an engagement (but not before we watched Blake Horstmann get sent home in a sobbing, weeping, sweaty mess of rejection.)

Becca and Garrett appeared to be the typical Bachelor franchise couple, doing the media rounds and posting gushing sentiments about each other on Instagram. Unfortunately, social media appears to have been the beginning of the end for the pair.

In June 2020, Garrett posted a lengthy statement to his Instagram supporting law enforcement officers in the wake of the Black Lives Matter movement. Many within Bachelor Nation were in an uproar over what they considered to be a tone-deaf statement from Garrett.

In September 2020, it was confirmed the couple had split, with Becca confirming this during her Bachelor podcast Bachelor Happy Hour. Becca said she didn’t think it would “come as a shock to anyone” that she and Garrett split.

And another one bites the dust! Bachelor producers must play this song a lot during their work hours.

Ashley Hebert and JP Rosenbaum were considered a rare Bachelor Nation success story after they got engaged when Ashley was the Bachelorette.

But, after eight years of marriage and two kids, life apparently took its toll on the once happy couple. Or, was that just the dumpster fire that was 2020?

The pair announced the split like every modern couple before them – on Instagram – with Ashley tellingly writing that their “differences have taken a toll” on their relationship.

It kind of made Bachelor Nation wish more of these couples had reality shows. We saw them falling in love, and now we want to see what went down when things fell apart.

There is so much to unpack with the relationship between Cassie Randolph and Colton Underwood, it’s like Christmas morning for all of Bachelor Nation.

But, like a really intriguing Netflix docu-series that you definitely don’t want to watch alone at night, things started getting dark.

In September 2020, Cassie filed a restraining order against Colton, claiming he was allegedly “harassing and stalking” her. She accused Colton of sending her multiple texts, including one in which he claimed to be an anonymous stalker. Not only that, but he allegedly put a tracking device on her car!

Cassie has since dropped the restraining order and is now rumored to be dating a musician named Brighton Reinhardt. He apparently wrote a shady song called “Creep” which features the lyrics “GPS on the underside.” Subtle.

Grocery Store Joeeee! Joe Amabile made quite the name for himself when he first appeared on The Bachelorette with Becca Kufrin in 2018. He was sent home during the first episode, yet still gained a legion of devoted Bachelor Nation fans.

Viewers were rooting for him on Bachelor in Paradise when he fell for Kendall Long, but paradise was short-lived. The pair split at the end of January, and Bachelor Nation hearts turned into the iceberg that brought down the Titanic.

While they have tried to remain friends, Kendall told Us Weekly it was “definitely difficult when you want to move on.”

Bachelor Nation needed a cute, quirky couple to add to its repertoire and Kendall Long and Joe Amabile stole that from us.

We should have known Ben Higgins and Lauren Bushnell wouldn’t work out when they filmed another reality show called Ben and Lauren: Happily Ever After? That’s not a typo, there was actually a question mark at the end.

At the end of Season 20 of The Bachelor, Ben Higgins got down on one knee and proposed to Lauren Bushnell in a super romantic moment, watched by millions of viewers.

What the audience also saw, was Ben profess his love to not only Lauren, but Jojo Fletcher. It wasn’t a good look and naturally caused some issues in his relationship with Lauren. We couldn’t expect her to say, “That’s okay honey, you were just being honest about your feelings!”

By May 2017, Ben and Lauren had called it quits, which wasn’t such a surprise after watching their show. They didn’t remain friends either, as so many past couples claim they will.

Lauren is currently married to country singer Chris Lane and is pregnant with their first child, while Ben is engaged to Jess Clarke. They didn’t find a happily ever after with each other, but at least they found it with other people!

Shawn Booth was the front runner during most of Kaitlyn Bristowe’s season of The Bachelorette, so it was no surprise when she chose him and sent Nick Viall packing (something his many haters watched with glee.)

While things appeared happy on the outside during the three years Kaitlyn and Shawn were together, it appears there were a lot of thorns on that final rose.

Kaitlyn appeared on the Scrubbing In with Becca Tilley and Tanya Rad podcast in which she talked about feeling “miserable” after the breakup. Though she pointed out the toxicity in their relationship, saying,” It’s three and a half years of feeling shame and like I don’t deserve love from him.”

It’s easy to look at a fairytale relationship on a show like The Bachelor/Bachelorette and assume everything is all roses, but Kaitlyn Bristowe and Shawn Booth’s messy AF breakup proves we just don’t know what goes on behind closed doors.

In one of the most recent breakups in Bachelor Nation, Peter Weber and Kelley Flanagan proved they couldn’t withstand the realities of the world outside of television.

Oddly enough, it looked as if Peter pulled a Mesnick/Arie when he dumped Hannah Ann Sluss in an Airbnb (is the website paying the Bachelor franchise for sponsorship or something?!) so he could go back to Madison Prewett.

The pair appeared together on After the Final and Rose, where Peter’s mom Barb made us all feel just a little more grateful for our own mothers-in-law. Peter and Madison split just days later.

In a strange turn of events, Peter later started dating Kelley Flanagan, whom he had sent home much earlier during his season of The Bachelor. The pair appeared to be an adorable couple, filming TikTok videos and posting loved up photos on social media.

The split came as a huge surprise considering the couple had just confirmed they would be moving to New York City together a week prior.

The only thing that didn’t come as a surprise was the fact that Peter’s mother Barb was a major factor in the breakup. A source claimed that Barb was a “major issue” in the relationship, and she “was very involved and expected to be a major priority within Peter and Kelley’s relationship.”

Kelley clearly dodged a bullet with that one!

The only thing worse than watching Rose let go of Jack in the middle of the ocean? Rachel Lindsay and Peter Kraus breaking up during The Bachelorette.

During the finale, Peter and Rachel were in a romantic setting reminiscent of that sex in the abandoned house scene in The Notebook (arguably the best in the film, and way better than “If you’re a bird, I’m a bird,” just try to change my mind.)

Peter asked Rachel, “What if I say I’m not ready to get married?” Um, then you would be an idiot for going on a show where the entire thing leads up to an engagement! Literally, that is all there is left to say. 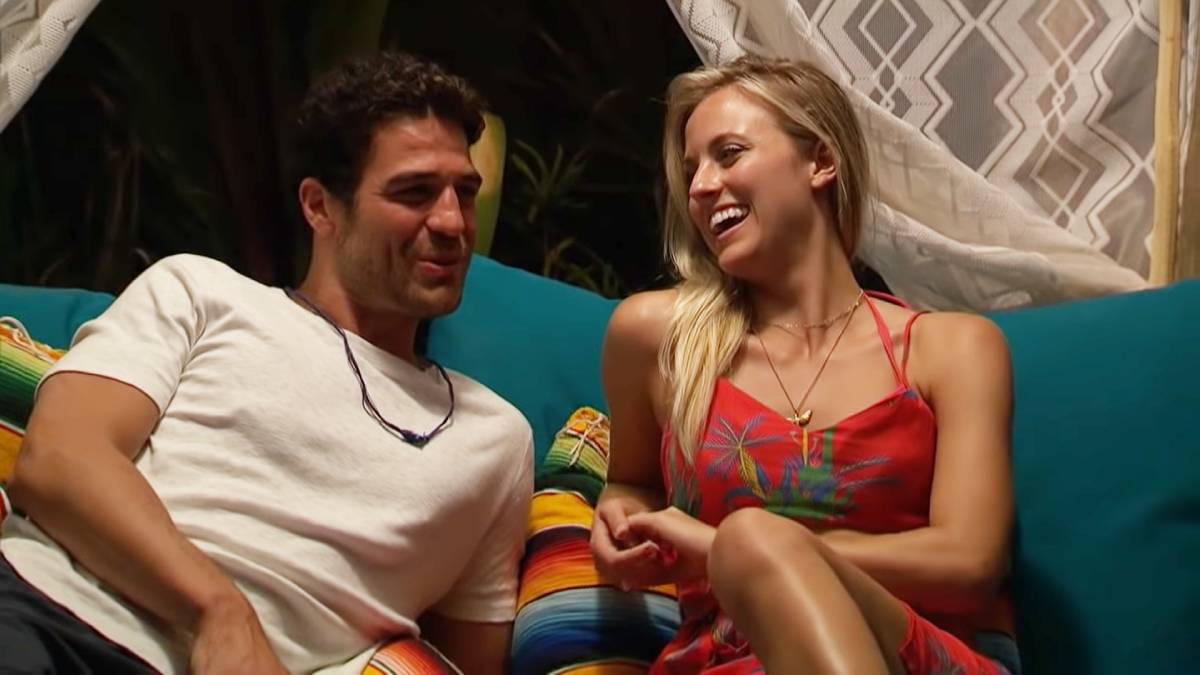