The newest Bachelorette, KatieThurston, reveals a sweet connection to new host Kaitlyn Bristowe that predates his season by years.

The Bachelorette viewers may have come for the hunky single men, but they stayed because of the buzzy energy between Katie Thurston and co-hosts Kaitlyn Bristowe and Tayshia Adams.

The chemistry between Katie and Kaitlyn, however, started way back in 2016 when Katie, just a fan of the franchise at the time, sent Kaitlyn a supportive and uplifting DM offering some very sweet words of encouragement after Katie saw an image online of Kaitlyn crying.

Katie became known in her season for standing up to the mean-girl bullies and quickly became a fan favorite for her plucky attitude. But, lucky for Bachelorette fans, was sent home fairly early by Matt James.

Katie’s poignant message to Kaitlyn landed in her DMs in October of 2016, and starts off with “Dear Beautiful Kaitlyn” and goes on to explain how she saw a picture of Kaitlyn on Instagram and it broke her heart. From there she confessed she had never sent a message to a celebrity before, but she wanted to reach out “woman to woman” to remind her just how beautiful Katie thinks she is both inside and out.

Katie told Kaitlyn she was her favorite from the franchise and that she enjoyed watching her journey from her season and was still rooting for her even though the season had ended over a year earlier. She was inspired to reach out after some mean comments were posted about Kaitlyn and she wanted Katilyn to know she “pitied” and “felt sorry for” the people behind the postings.

The Challenge: All Stars’ Jemmye Carroll fired back at one fan who criticized the decision to ...

Katie sent these DMs to Kaitlyn five years ago but she recently unearthed them and posted them on premiere day of The Bachelorette. It became clear very quickly during the episode that the two women like each other a great deal, and their energy, coupled with Tayshia’s was one of the most relatable bits of the night. Ahead of it airing,

Katie posted a message on her story with a line about “life coming full circle” which made Kaitlyn’s turn as co-host even more appropriate. 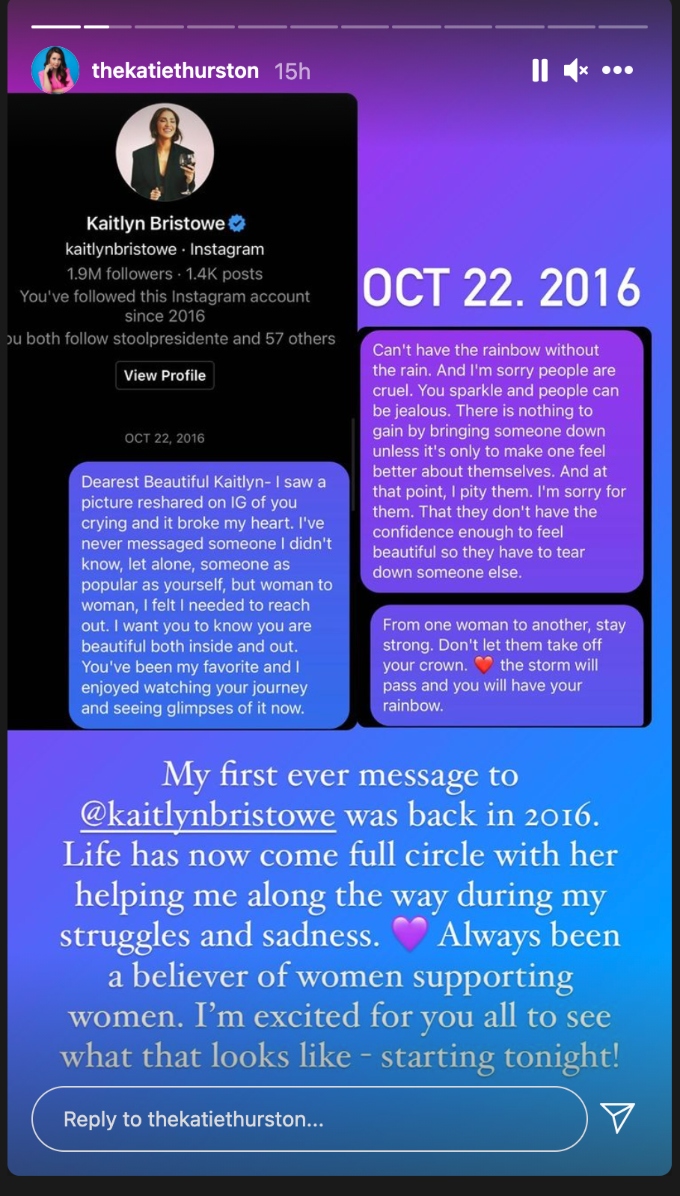 The Bachelorette women are getting rave reviews

Between Kaite, Kaitlyn, and Tayshia Adams, the lady energy was bursting through the screen and it was almost as compelling to watch them as it was to watch Katie and the men.

You could tell that Kaitlyn and Tayshia had high hopes for Katie’s success, underscoring the part of Katie’s caption that read “always been a believer of women supporting women.”

That original direct message from 2016 proves Katie has always been an advocate for female friendships, and its going to be fun to watch her and the co-hosts work together throughout the season.

Fans of Matt James’ season know Katie to be about female ally-ship all too well and watched as Katie stood up to one after another mean girl, often taking on the fight for the woman getting attacked. It was this attitude that made Katie a front runner for Bachelorette because fans immediately found her girl’s girl vibe super relatable.

Kaitlyn, on the other hand, quite unfairly, didn’t garner the same kind of love from the fans. Before the sex-positive Katie was trotting out sex-aids on national TV, viewers were slut-shaming Kaitlyn for sleeping with both of her front-runners in the fantasy suite.

While she eventually picked Shawn Booth to offer the final rose to, she was obviously torn between him and Bachelor-nation staple, Nick Viall. The backlash from those episodes followed Kaitlyn long after the finale aired, and set a negative precedent in popular opinion about Kaitlyn.

She kept at it and didn’t fall out of public view for long, however. After a pretty public fight with Bachelor-creator Mike Fleiss over a Dancing with the Stars turn, things got even uglier for Kaitlyn online, as trolls came for her in every aspect of her life.

Here you can see Katie comforting Kaitlyn after she posted a picture of herself, dejected and crying, as a result of all the online hate she was receiving.

Katie, in her short turn in the spotlight, is known to take up for the underdog, and watching one of her favorite personalities take an online beating was just too much for her.

It feels very on-brand for her to slide into the DMs of someone she’s never met just to offer her an “atta girl.” Now, all these years later, Kaitlyn is helping her navigate this experience and is going to be the one giving her some comfort when things get ugly, which they inevitably will.