Katie Conrad is displeased with the Married at First Sight critics after her appearance in Season 10. Two days after the reunion show revealed she cheated on her husband, Derek Sherman, Katie is defending her actions.

It was not an easy ride for MAFS couple, Derek and Katie. They stayed together on Decision Day, but by the time the reunion show aired, they had filed for divorce. Katie has endured a lot of backlash for her actions during and since filming the hit Lifetime show.

Katie lashes out at Married at First Sight fans

Katie has a message for Married at First Sight fans who keep judging her for the way things played out on Season 10 of the hit reality TV show. She used Instagram Stories to pen a blunt, honest, and stern post to all the critics.

“To those of you who think you know me based on 2+ hours of TV a week, you do not. This was one of the hardest experiences I have ever had. Not only because of the difficulty of trying to make a marriage to a stranger work but because of how difficult it has been to present my true self,” she began her lengthy note.

Our first MAFS Season 13 wedding is done! 💍 What do you guys think of Bao and Johnny? Things ...

Our first MAFS Season 13 wedding is done! 💍 What do you guys think of Bao and Johnny? Things didn’t look so pretty when she hated his sports present, and she looked horrified at having known him …. But then he told her she looked beautiful, she recited a beautiful poem, and they even kissed! 💋So they kinda took us on a 180 but I’m here for it! Are you? And swipe ⬅️ to see some of the Tweets! 🥂

Katie continues by letting people know she is not perfect, nor does she defend the things she during her time on the show.

“I have acknowledged mistakes. It may not have been shown, but I have. That being said, some things are kept private. Some things are twisted by others to benefit them. (three sides to every story) and some things can’t be understood unless you were there. I am not the person I look like on the show,” she expressed.

The MAFS alum ended her message by thanking those who understand she is different from her TV persona. Katie also thanked fans that have shown her positivity and support while her story played out on screen. 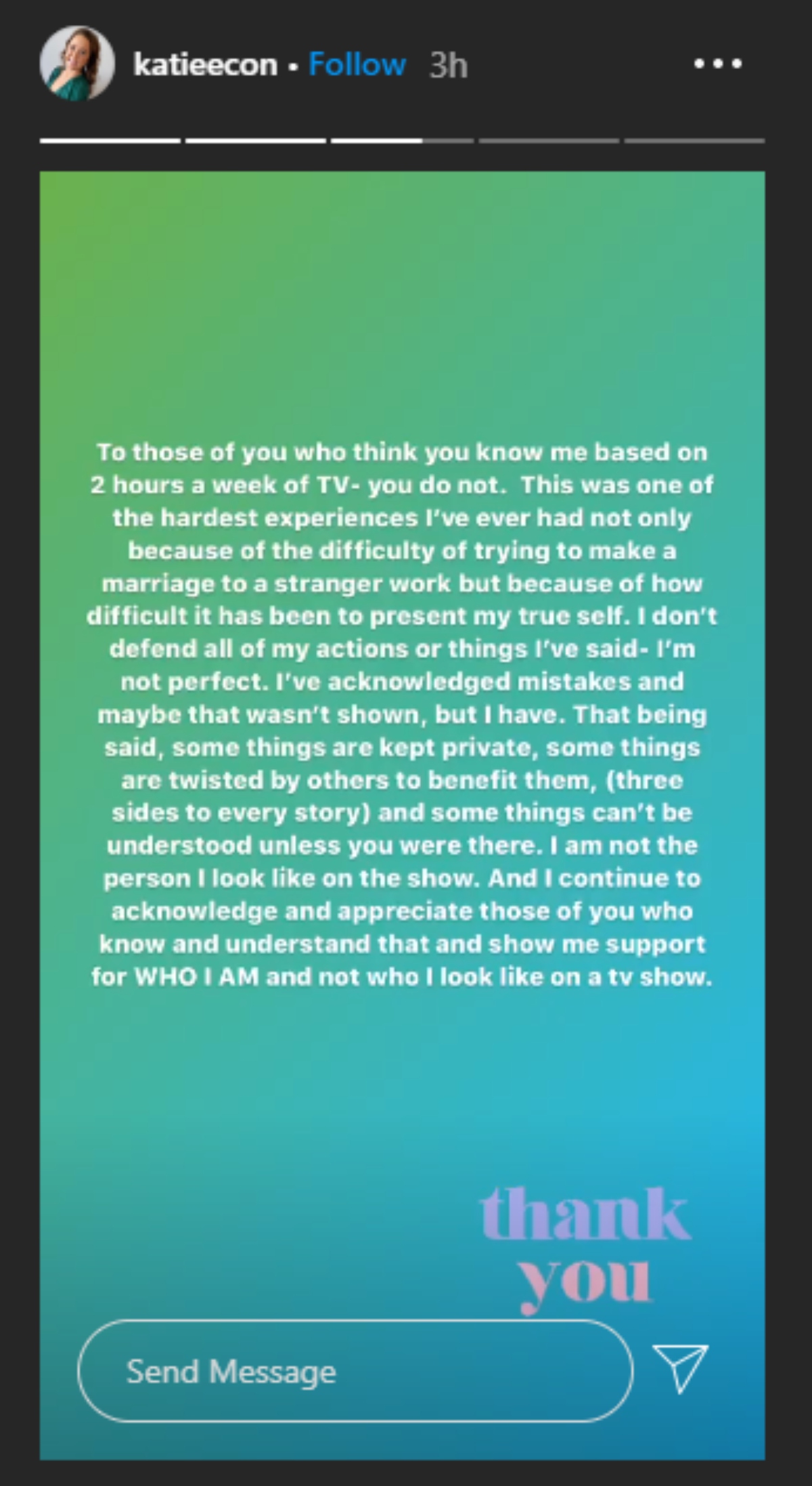 Along with standing up for herself, Katie also spilled how she felt during filming in an interview with In Touch Weekly. She explained that at times she felt like quitting the experiment.

However, Katie became determined to see it through and give it her all, but it was not easy. She claims the couple had different relationship needs. Plus, Derek’s personality did not mesh with Katie’s and vice versa.

As they worked on their marriage, it became clear to Katie that she and Derek were not a team. The realization added more conflict to their union. Her ex coming back into the picture didn’t help either.

Whatever Married at First Sight fans may think of Katie Conrad, she is here to say that people do not know her.

Married at First Sight is currently on hiatus.