Pauly D is one of the most beloved members of the Jersey Shore: Family Vacation cast. Until recently, he has been one of the most eligible bachelors on the series until finding what appears to be a happy and fulfilled relationship with his Double Shot at Love co-star Nikki Hall.

Pauly has spent the better part of the show’s 11 years searching for love and has been involved in one serious relationship other than Nikki, a three-year relationship with Aubrey O’Day.

The pair started on Famously Single in 2015 and had an on-again-off-again relationship that lasted for nearly three years before they called it quits for good in 2018.

Throughout the series’ initial run, from 2009 through 2012 and from 2018 through today, Pauly has maintained a close and sister-like bond with the women on the series which included Nicole “Snooki” Polizzi, Jenni “JWoww” Farley, Deena Nicole Cortese, Sammi “Sweetheart” Giancola and Angelina Pivarnick.

Still, there have been times when their close relationship have straddled the line between close friends and more than friends.

Who has Pauly D hooked up with during his Jersey Shore run? You will be surprised.

Pauly D’s hookup with Jenni Farley was caught on camera

Pauly and Jenni first caught one another’s eye during the first season of Jersey Shore in 2009. They flirted at a club and kissed in full view of their fellow roommates before heading to Pauly’s bed to spend some romantic time with one another.

“I go upstairs to lay down and JWoww comes and lays down with me,” Pauly said in a 2009 confessional video.

The two began to get more intimate when Jenni realized that Pauly had a piercing in his nether region, which she said she “loved.”

“I technically cheated on my boyfriend [Tom] with him I guess,” she admitted in the throwback clip.

The couple never acted on those feelings for one another again until after Jenni officially divorced her husband Roger Mathews and was on a break with boyfriend Zack Carpinello.

The two were all over one another during a night out a strip club where the pals celebrated Angelina Pivarnick’s bachelorette party in New Orleans in late 2019 but it doesn’t look like they actually hooked up.

“I have too much respect for her,” Pauly said. “JWoww, I will never disrespect you like that. You know that, right? I will never make you do anything that would jeopardize anything.”

“I thank you for that,” she replied, kissing him on the cheek. “You’re the sweetest.”

Pauly and Angelina hooked up off-camera

Pauly hooked up with Angelina off-camera during the first season of the show while the cast was on a promotional tour in Las Vegas.

This stunning news was revealed after a Jersey Shore producer was asked during an Ask Me Anything session on Reddit, “What’s one of the wildest moments or storylines that you can’t believe didn’t make it to the show?”

“We touched on it lightly but Angelina used to hook up with Mike years ago… he actually suggested her to casting originally!” the producer revealed in the thread.

“During a promotional trip (it was either in LA or New York but I think it was LA), she hooked up with Pauly as well. I think all of this could have made a great storyline. But it just never had any legs. What happens in LA, stays in LA apparently,” they continued.

“Angelina and Pauly had hooked up around the time of the JS season 1 reunion,” the producer continued. “This caused feelings on Angelina’s side and, to make it long story short, she was jealous that Pauly wasn’t super into her and was hooking up with other girls.”

The two also became quite flirty with one another during a Las Vegas outing when dancing and drinking together at a club while Angelina was engaged to her husband Chris Larangeira in full view of Jersey Shore’s cameras.

Both Deena and Nicole kissed Pauly but did not take their affection for one another any further. 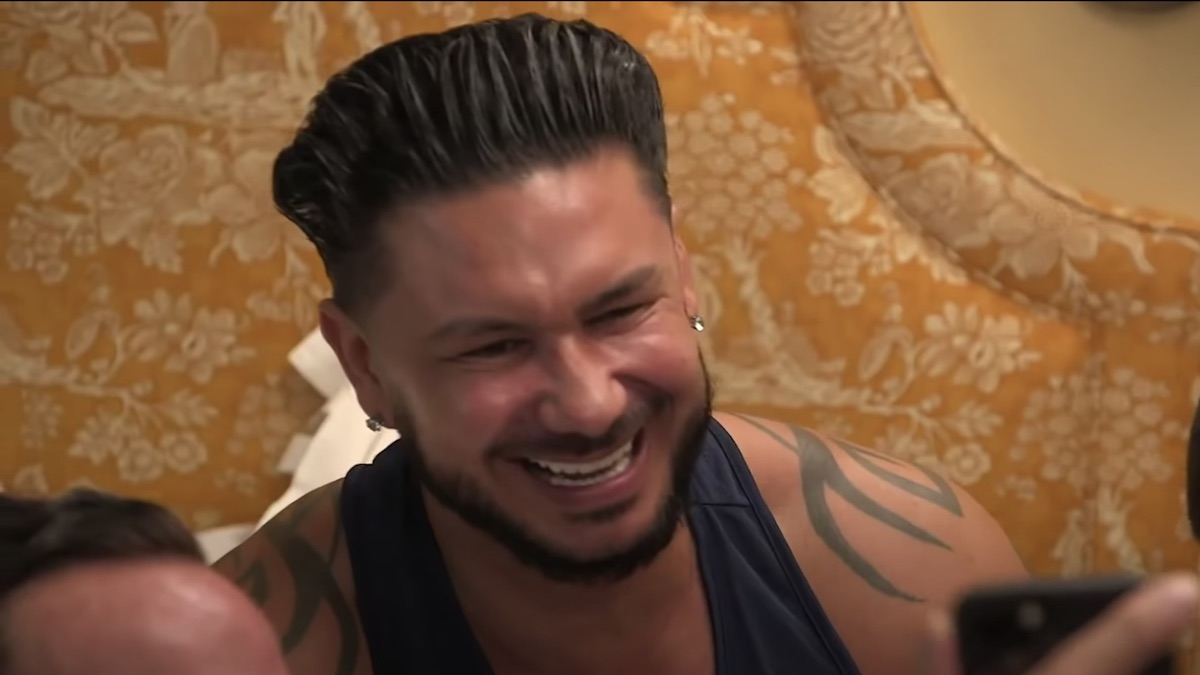