Captain Glenn Shephard responded to Jenna MacGillivray’s apology for her disrespectful behavior on the most recent episode of Below Deck Sailing Yacht.

Fans watched as Jenna spoke horribly to Captain Glenn during a sit down regarding her management of the interior department.

The captain asked Jenna to tone down her PDA with chef Adam Glick, especially in the crew dining area and the galley.

Jenna did not take the request or criticism well. She instead began speaking rudely, arrogantly, and disrespectful to the captain.

Captain Glenn has a message for Jenna

On Tuesday, Jenna issued an apology to Captain Glenn via social media.

Now the captain is responding to the chief stew, and his reaction proves there are no hard feelings.

“Hey Jenna, you have no need to apologize to me, you’re great in my book, the audience will never know you the way I know you,” he said in the comments section of her post.

“You’re not perfect, none of us are, but I’m sure you’re a big enough person to learn from the mistakes and get better moving forward. I take responsibility for not picking up on the tensions sooner that I might have helped smooth them, but it’s no easy thing we do, and we all knew that going in.

“Remember, it’s not just the message, but how it’s delivered also, that can make the difference.”

Along with letting fans and Jenna know everything is just fine between them, Captain Glenn gave her advice on dealing with the trolls.

He told Jenna not to let the haters get to her because the trolls get pleasure in tearing people down. Oh, and the captain shared haters hate to deal with something missing in their lives. 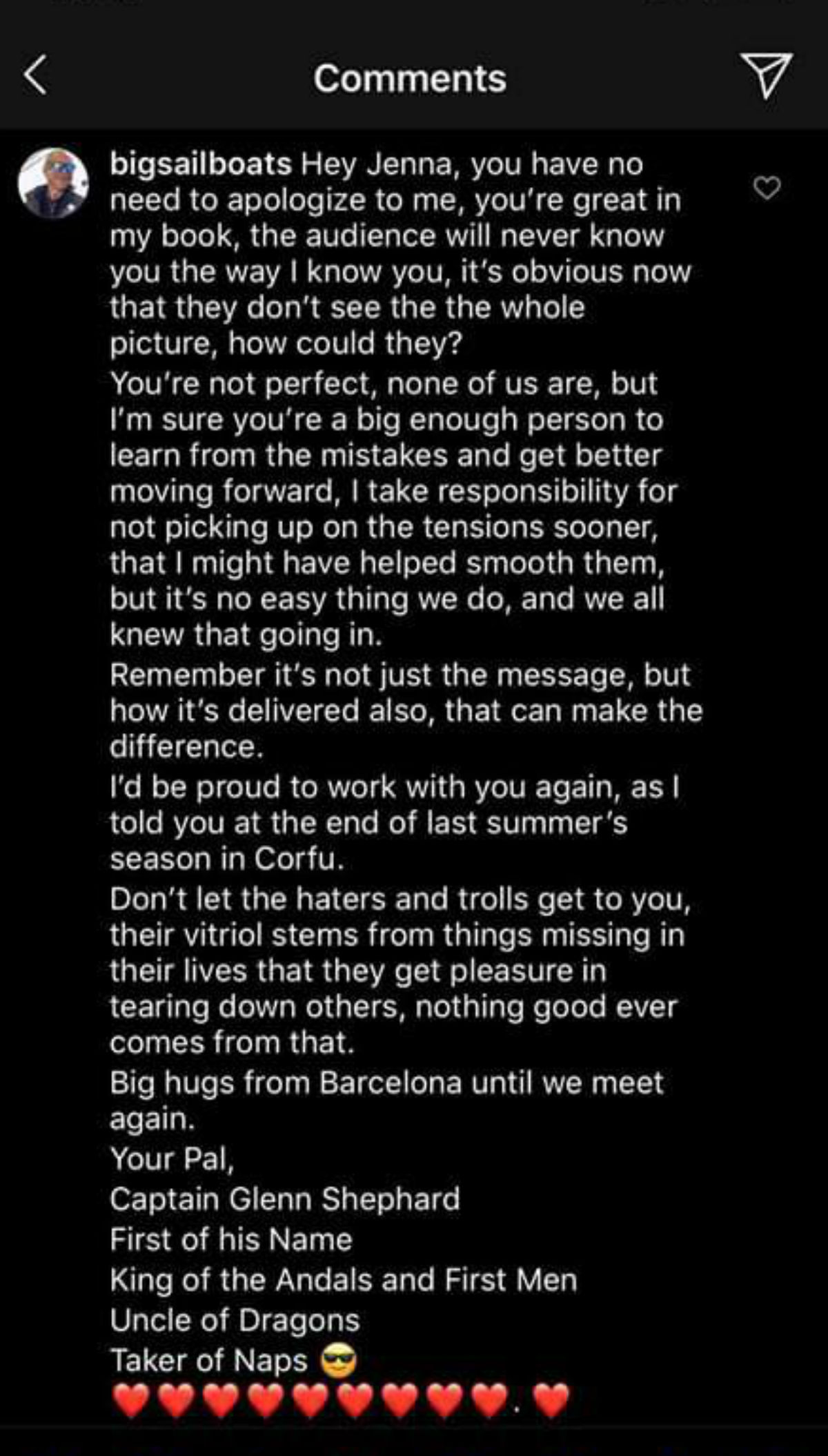 The social media lovefest continued when Jenna showed her appreciation for Captain Glenn and his kind words.

“I have an enormous amount of respect for you as a captain, and I appreciate this public statement. Your humble servant, Chief Stew Jenna MacGillivray. I bend my knee to you,” she wrote in the comments section of his message.

It seems like whatever drama occurred during filming is all behind Captain Glenn Shephard and Jenna MacGillivray.

Fans will soon find out how Jenna and Captain Glenn genuinely feel about each other.

The Parsifal III crew is coming together for the Below Deck Sailing Yacht reunion. There is no way host Andy Cohen won’t bring up Jenna speaking to Captain Glenn so disrespectfully.