The internet couldn’t help itself when news broke this week that The Curse of Oak Island is returning for Season 5.

While the announcement was met with huge excitement by most, some were unable to hold back from making tongue-in-cheek predictions about what Rick and Marty Lagina might find — with a general collective cry of “more wood!”

No matter how much viewers love the show, many also love to poke fun at how after four seasons the brothers STILL haven’t found any treasure to speak of. They are, however, no strangers to old wood and coconut fibers.

So when History announced Season 5, the inevitable happened…

(For those wondering, Dan Blankenship is believed to actually still be alive and well).

We told earlier this week how the new season sees the brothers uncover a pirate’s chest and a set of three keys for other chests. But that didn’t stop fans from remaining skeptical about the discoveries after we posted a story about it on Facebook…

And some speculated that the brothers might have found something else altogether.

Two other themes that had fans laughing were the anticipation that much of the season will be recaps – and the narrating, which is done by Robert Clotworthy, the same person who narrates Ancient Aliens.

One conversation even managed to combine comments about the narrator AND the wood. 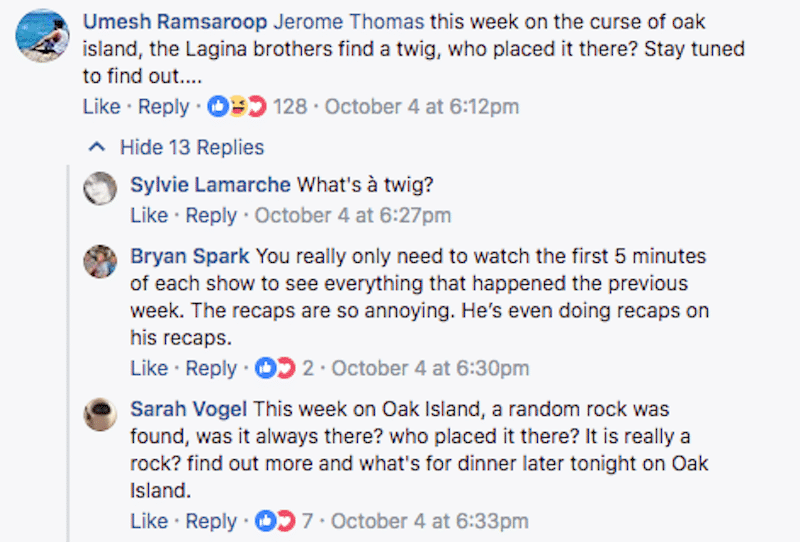 However, despite the apparently common belief that nothing of real importance will be found again this season, fans said that small fact wouldn’t stop them from watching.

Because, well, The Curse of Oak Island…

At least if this season falls flat, there’s always next year to look forward to…

The Curse of Oak Island returns for Season 5 on November 7 on History.

The Curse of Oak Island: Team discovers evidence of a major British...