His wife, Amanda Kloots, confirmed his death on Instagram while paying tribute to the 41-year-old, Tony Award-nominated star from Hamilton, Ontario.

“God has another angel in heaven now,” Kloots wrote on her Instagram account. “My darling husband passed away this morning. He was surrounded in love by his family, singing and praying as he gently left this earth.”

Nick Cordero was reportedly diagnosed with COVID-19 in March after being hospitalized with suspected pneumonia. His wife Amanda, a fitness instructor, has kept fans up-to-date throughout the actor’s hospital admission in Cedars-Sinai Medical Center in Los Angeles.

Cordero was on a dialysis machine, a ventilator, and an ECMO machine at some points during his 95-day battle with the viral disease. His wife revealed that he had to have his leg amputated due to blood clotting and the virus severely damaged his lungs.

This led to rumors that the young actor suffered from underlying conditions such as diabetes. However, MSNBC’s Today reports that Cordero was reportedly healthy before his COVID-19 diagnosis.

Cordero was a popular Broadway actor who was nominated for a Tony Award and a Drama Desk Award for his role in Bullets Over Broadway. He also won a Theatre World Award and Outer Critics Circle Award for the role. Following the news of his tragic death, several tributes poured in with his friend and actor Zach Braff leading tributes from fellow actors such as Anika Noni Rose, Josh Gad, and Daniel Dae Kim.

“I have honestly never known a kinder person,” Braff said in an Instagram statement. “But Covid doesn’t care about the purity of your soul, or the goodness in your heart. The last thing he ever texted me was to look out for his wife and one-year-old son, Elvis.”

Viola Davis tweeted, “RIP Nick Cordero! My condolences to you Amanda who fought and loved so hard….so sorry for his little one. My heart is with you. May flights of angels…..”

Due to Nick Cordero’s relative youth, weight, and health before being diagnosed with the coronavirus, many used his tragic death to serve as a warning to COVID-19 skeptics. 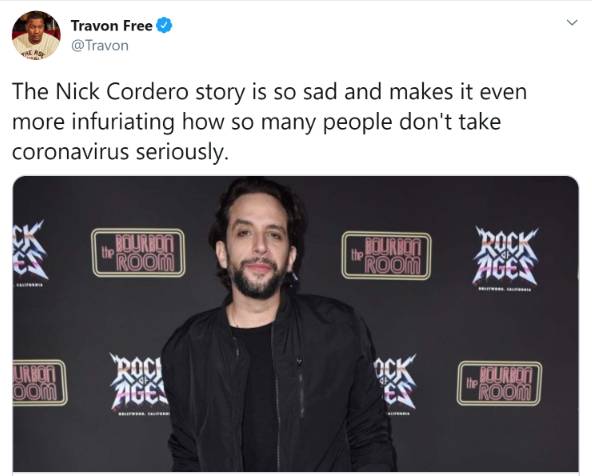 Zach Braff encouraged his followers to wear a mask after the death of his friend. “Nick Cordero fought as hard as he could for 90 days,” he wrote in a tweet. “Wear a mask. F**k Covid.”