This Sunday on CNN (May 1 at 10 p.m. ET/PT.) make sure to tune into W. Kamau Bell’s United Shades of America where a level 2 prison, San Quentin, is Kamau’s focus as he introduces us to people behind bars trying to make the best of a stacked situation.

There are four levels total in the prison system, one being for lighter sentences, four for worst of the worst. From the California office of corrections:

Placement Scores are determined by a thorough review of an inmates case factors to include: age, crime committed and if violence was used, prior incarcerations, gang involvement, etc. Each year an annual review is performed by a Counselor to determine if an inmate meets the criteria to have his/her placement score reduced. An inmate has the opportunity to reduce their score if they have been programming and have not received any disciplinary actions. In contrast an inmate’s score and subsequent housing level can be increased due to receiving disciplinary actions.

On the new United Shades of America we see the everyday realities, the segregation and the discomforts of prison life. Offences range from petty theft and much more serious crimes, but San Quentin is not housing the truly heinous of criminals. In fact it houses a lot of prisoners who made a mistake as teenagers and are paying for it with their entire adult lives.  Kamau also talks to the flip side, the men who are in charge of them. From the warden down to the Chaplain and a guard who talks about the stress of his day-to-day job.

United Shades of America dispels the entertainment gloss of prison life and does a damned good job at showing the remorse and reassignment many prisoners feel. All at a profit for corporations who make money keeping people locked up far longer than they should be.

Near the glittering city by the bay of San Francisco, you will find San Quentin: a notorious prison that houses the largest death row in the United States. Kamau poses the questions that beg to be asked, why does the greatest nation on Earth have the highest incarceration rate on the planet?

America has 5% of the world’s total population and 25% of the world’s prisoners. African-Americans make up about 13% of the country’s population, but they make up 40% of America’s prison population. This numerical discrepancy is examined as Kamau enters the world of San Quentin in a highly watchable episode.

Kamau talks about over sentencing for smaller crimes, unequal application of the law and the public’s demand that prison be so draconian as to punish to the full extent of the legal letter.

We learn just how horrible the food is. We witness how cramped the cells are. We also meet people optimistic despite these conditions making the best of it.

California Department of Corrections and Rehabilitation offers two programs Kamau points out, a path to Jesus and Alcoholics Anonymous.

We learn that San Quentin benefits from local outsiders who volunteer time and resources, and even moguls like Mark Zuckerberg and his wife Priscilla Chan.

But the circumstances are dire despite few diversions. Many have life sentences with the possibility of parole, and the notion that they can be rehabilitated yields to the state’s status quo of throwing away workers, voters, fathers and all of their potential. 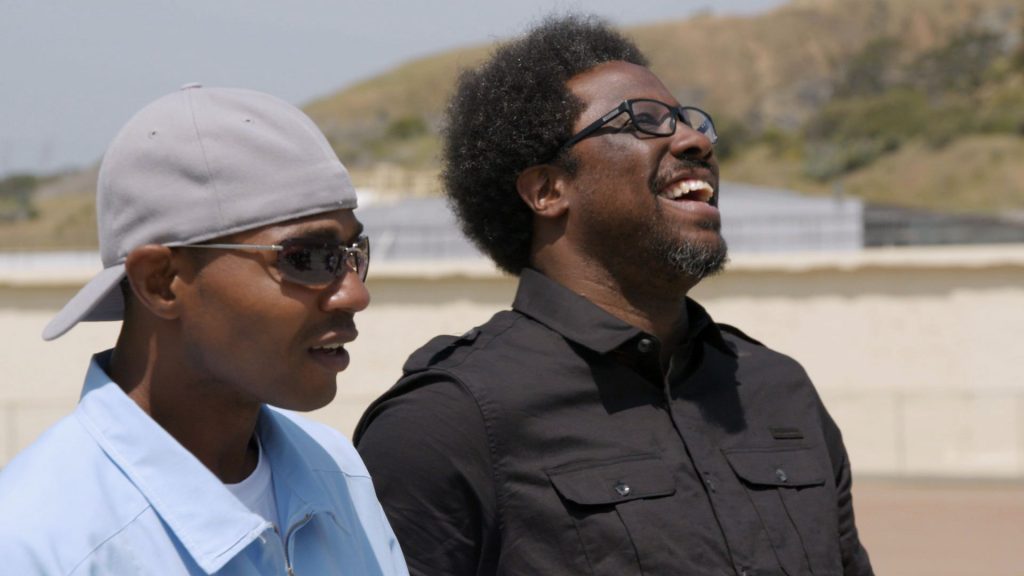 TV Critics April Neale and Ernie Estrella talk about this episode briefly and how it impacted them:

April Neale: Ernie, this was eye-opening for me, I really wanted to see Sean Thomas, the journalist and publisher of the San Quentin newspaper have some hope of getting a path out of prison based on his real investigative journalism experience, but it seems he is trapped in this unforgiving system.

Ernie Estrella: For a lot of people out there, crime and punishment is black and white, and I’m not talking about the color of one’s skin, although that is a factor when you’re talking about prisons. But I’m talking about unjust punishment where it doesn’t fit the crime. I think it’s a difficult subject to forgive murder on any level or think that any sentence is too long, but like Sean’s story, it seems like every prisoner’s case should be re-evaluated and see if the best thing for a prisoner who is considered rehabilitated, if serving out their full sentence is the best thing.

Many of these prisoners featured on United Shades can still offer good in this world and own their mistakes; some of their crimes, like armed robbery probably don’t deserve some near-life sentence, especially when you hear other sentences like rape being too lenient. Life is in the shades of gray, but too often in the case of crime, punishment it is black and white.

AN: That’s unfortunately what is true.  You hear these stories of people locked up for thirty years for a negligible amount of pot and here it is legal in a few states. I was also shocked at how extreme the racial divide, I thought that was a dramatic Oz (HBO) thing to gin up drama, but no. Do you think this is survival or a power play and hierarchy based on a few Alpha males who control internal commerce and other things?

EE: Yeah, it’s not surprising at all. I mean we’ve all seen prison fiction play out, but you do see it all around you. We tend to stick to our own tribes for the sense of familiarity and comfort, but the beauty of this country anyway is the opportunity to embrace other cultures and to mingle with people who are different than you, yet many choose not to and explore.

To go back to the first episode of United Shades, it’s not necessarily a bad thing to stick with people who are like you, but there’s a whole world out there you’re not experiencing. But I’ve digressed. So in jail, all of that is heightened and amplified yet they’ve all been put there for the same reasons.

Survival is probably the first thing you’re concerned about when you go into prison and finding protection, but there’s always a hierarchy at play and sometimes, a lot of that is predetermined when you walk through those gates. The scary thing is if one chooses not to be loyal to their race.

Again, this was a Level 2 prison (I’m still getting used to the idea of San Quentin not being a level 4) so we’re not seeing just how bad the situation is in other higher level security prisons.

AN: I think too there are definitely guys who are the alphas in each group and leverage their numbers as a power play. Strength in numbers. It’s so antithetical to normal society, I get why but seeing it so dramatically played out is sobering. The food situation is grim, why don’t they promote growing their own food, or is this another profit center for corporate prison companies?

EE: First off, I’m sure it’s not a priority to keep these prisoners nourished, much like it is in the public school system. They’re obligated to keep them alive but healthy? Probably not and when Kamau compares the food to middle school food, everyone can relate, and feel the urge to pack their kids’ lunches from here on out.

Cheap food is rarely good food on any level but I do think learning the skill of agriculture would be a great program to feed rehabilitated prisoners to. There are these movements to get more agri-based businesses going to reinvent cities like Detroit.

You hear of the dying generations of farmers in the Midwest, so it seems like a sensible suggestion on your part. It would be a productive trade in the yard, that’s for sure. Unfortunately, the food is probably another way to keep the inmates down and hopeless. I’m not saying these guys should get gourmet meals but good lord, turkey dogs and dried carrots?

AN: Personally I think these guys working in the dirt responsible for their own food source would be an amazing rehabilitation, it would teach so much, responsibility, the pride of ownership in a sense, learning how their positive actions net positive tangible results and it would cut most of the prison food contracts.

I believe gardening is good for people. But I don’t know that I would be so forgiving towards career criminals who murder, or rapists, child molesters and serial killers.  So there’s that. What is your opinion about how criminals should be divvied up and separated?

EE: That’s the real issue here. Prison is where lives go to waste and some of the people sentenced there deserve every year they’re in. First, some people need to be sifted out of society and be separated for the safety of others. You’ve listed a handful of crimes that can’t be forgiven easily if at all. Hell, you look at white collar criminals and some of their acts are tough to forgive when you think about how many people were affected by a Bernie Madoff type. But most of the prisoners are small-time crooks. You do have to look at some of these inmates who have committed lesser crimes and wonder if after 10-20 years they’ve more than satisfied the punishment part, and should they be lucky enough to be exposed to rehabilitation programs, that should they come out they can still be a positive contributor to society.

Look, in many cases, children are going to act out and all it takes is to have some sense shaken into them, or some harsh reality fed to them. It’s enough to steer them on the right path. After 5-10 years, is plenty harsh enough and I’m not naive to think that won’t be enough for some others. Considering the taxpayers’ expense, inmates should be put in programs to put their lives on the right path because I think the idea should be to get most of these inmates to do their punishment, realize they’ve done wrong and get out.

AN: I agree. The smaller offenses, the Sean Thomases of San Quentin who are writing and doing real journalism, and just think if they had a Homeboy program to teach these guys culinary skills – and set them up to succeed once their time is served. These guys then would be able perhaps to intervene with someone ripe for the incarceration assembly line and thwart that conveyor belt of wasted humanity.