There’s just one week to go before the premiere of The Curse of Oak Island Season 7 — and Monsters and Critics has an EXCLUSIVE pic of Rick and Marty Lagina for fans to enjoy as the excitement ramps up.

The new season drops on November 5 and by the looks on Rick and Marty’s faces, this is set to be the most exhilarating year yet.

The moody, sun-strewn shot is perfect at building the anticipation…but also leaves us guessing. What do the Mona Lisa-like looks on the Lagina brothers’ faces portend?

Click on the image below to open the FULL SIZE version of our exclusive pic: 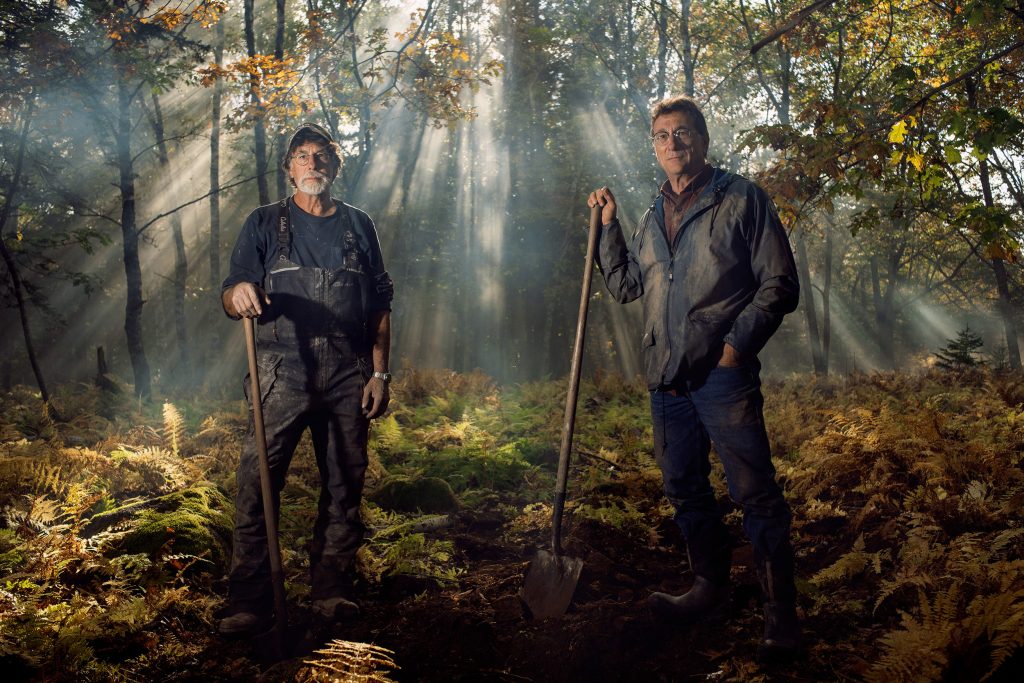 Judging by their muddy clothes and well-worn shovels, we can surmise that this year the erstwhile brothers go all out, doing whatever it takes to find the fabled treasure buried below the island’s surface.

Rick has already gone on record saying they hope to find something in the swamp that could “change history as we know it.”

A nearly 10-minute clip from the first episode of the new season confirmed that the treasure-hunting team certainly strike something big.

As fans already know, the swamp is a main area of interest this year, based on findings from the end of last season.

That’s when the team discovered that seismic data showed a ship-shaped anomaly lying under the muddy water — which they hope could lead to the island’s legendary 220-year old mystery being solved.

In already-released scenes from Season 7, Gary Drayton appears to firmly believe that the murky image could be that of a sunk Spanish galleon. We also know that the team applied for permits to drill and excavate the mucky swamp, and diver Tony Sampson conducted a reconnaissance mission.

The team have even more motivation to solve the centuries old mystery this year as it is the first time that dig patriarch Dan Blankenship will not be present, following his death in March 2019 at the age of 96.

Dan’s absence is fueling the team’s desire to give the legendary treasure hunter the breakthrough he sought during his 50-plus year tenure on the small Novia Scotia island.

Is this finally the year the intrepid Oak Island team recoup the fortune they’ve invested, as well as recompense Dan by securing his legacy?

The final of four special The Curse of Oak Island episodes — the Top 25 Moments You Never Saw — airs tonight at 9/8c on History. Then make sure to tune in next Tuesday, November 5, for the Season 7 premiere.

Once in, forever in!