Tonight, on a special two-part two-hour Swamp People: Everglades, Troy Landry needed every available lucky donut in the Sunshine State that could be had.

Troy and nephew Holden head to Florida, wait for it… to bag some Nile crocodiles based on some well-sourced hearsay!

Our beloved Louisiana Swamp People finale was last week, but sensing the mass withdrawal the millions of fans had, History greenlit this amazing 2-hour bonus episode titled Swamp People: Everglades.  We hope it’s the start of more road trips for “Ho” Holden Landry and his Uncle Troy Landry, aka King of the Swamp.

The first hour is titled Monster in the Dark and has us riding shotgun with Troy Landry and his nephew, Holden. They respond to a call for help and head to the Florida Everglades to assist a friend – Uncle Grumpy – who must figure out what beast is terrorizing a cattle farm square in the middle of the Glades.

One who eats “mama cows” according to Troy. Grumpy gives it to him straight: This ain’t no gator business, this is pure Nile Crocodile aggressive behavior he feels and confirms they exist in Florida.

The mangled remains of large dead animals are freaking Holden and Troy out.

Troy’s search for the alleged Nile crocodile takes him to the deepest and darkest parts of the Florida Everglades.

This area is a million square plus miles of no cell phone service, pitch black, and death from many predators country.  Troy voices the opener, telling us his Cajun outlook, work ethos, and how he lives by the coda of helping a fellow swamper in need. The Landry clan lives off the land, and they have a healthy respect for nature.

Then, Troy says “alligator season is over” and that he got an “urgent call” from a buddy named Uncle Grumpy in Central Florida.

As we ride there with Troy and Holden, we learn about the quantities and size of the missing livestock being eaten up are not something an average gator can do.

Also of note, MIA from this two-parter are Troy’s sons Jacob and new daddy Chase, who have to take care of business back in Louisiana.

Holden has a new nickname. “Holy Boly” is now what Troy calls his nephew who is an amazing shot. They meet up with Grumpy, a “nuisance hunter” down in Florida.

Grumpy gives Troy the rundown. He blames Hurricane Andrew for breaching the Everglades, as African Nile Crocs from careless collectors and certain animal labs in the Miami area escaped in the aftermath of the storm.

Nile Crocodiles, indigenous to the African continent, seem to flourish in the wetlands and miles and miles of secluded waterways of the Glades.  Now, this invasive species which is protected under Florida law (!) is routinely sighted and reported to be clocking in at 20 feet.

Our King of the Swamp Troy is freaking out. He learns that African crocs beat American gators in every nasty category.  Well, at least there are no Aussie saltwater crocodiles in South Florida…yet.

Troy and Ho meet rancher Paul Jacquin and his ranch hand Kyle Ward, who deliver the bad news to Troy. No guns in Florida, it’s bangsticks, cross bows or a Swiss army knife.  Harpooning is one way you can kill them too! 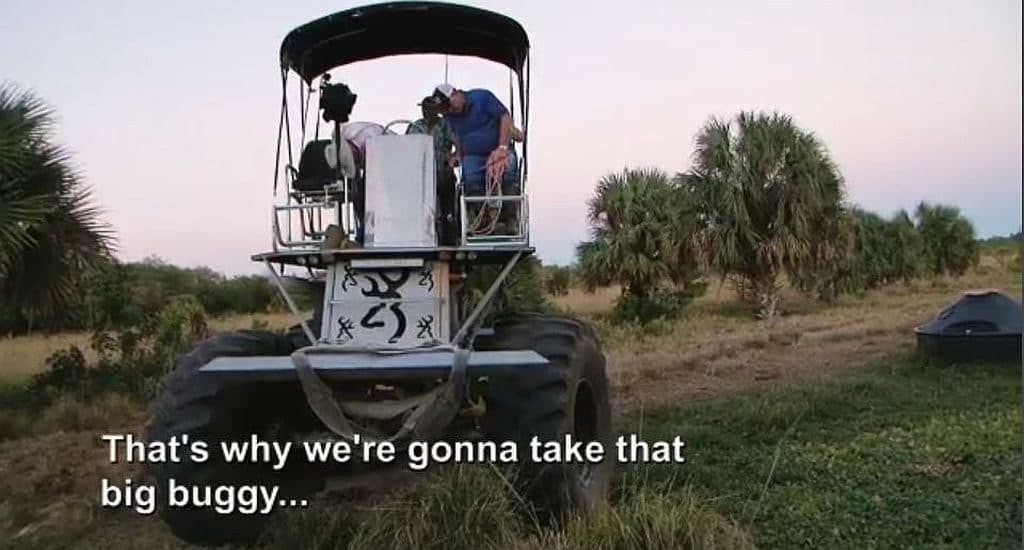 Night hunting, however, is legal in Florida. but we learn that is when they can see best and are more active.

Troy spots the first alleged croc and asks, ‘Do we have to leave the buggy?”

They suss the beastie up. Meh, it’s “just a gator,” says Troy.

Ah. The next one, however, is “heavy heavy…” according to Troy.

Three hooks are put into this monster. Three men cannot pull him up.

Turns out to be a 14-foot alligator!

Okay, so the Nile Crocodile is still a missing reptile, and Uncle Grumpy assures Troy he will prevail and sends him off to the snake hunters in the Everglades.

But first. A detour! Skunk Ape Headquarters is where they wind up before they meet up with Bill and Dusty. This is the regional Mountain Monsters, Big Foot Yeti, living (allegedly) in Florida.

The snake hunters, Bill and Dusty “The Wildman” are bemoaning the situation to Troy, as playful otters, panthers, native boars and other mammals are being wiped out by invasive pythons and crocodiles.

Wildman goes barefoot (!) into a marshy (potentially full of snakes, gators or crocs) hidey-hole. He pulls out a cute baby python.

Later, Holy Boly finds mama and grabs the python cold, earning the respect of the snake hunters.  The mama python pays back baby-snatcher Dusty back by biting him.

On the most desolate road in the Everglades, the four are hunting more snakes, at night. Eerie is an understatement.

Troy hopes a croc will pop up into the hunt. Creepy is more appropriate. No cell phone coverage, y’all.

They get out. Pitch black, a pile of gators are spied in the water. The first act ends. Our King of the Swamp Troy is still determined to find him a croc.

Swamp People recap: Mystery in the Bayou’s chicken dinner not a winner,...

Swamp People recap: Don really is a genius, Ashley got stung and...

Swamp People recap: Chick’s dilemma, Ashley’s gun situation, and The Champ no...
Sign up for our TV newsletter!