Jersey Shore: Family Vacation just returned for its fourth season and the cast is all grown up.

Most of the housemates from Jersey Shore are now parents or expectant parents. Mike Sorrentino is now married and sober, and Vinny and Pauly have their own spin-off.

But Jersey Shore Family Vacation wouldn’t be possible without the memorable antics of the cast during the original series.

In honor of the recent premiere, here’s your list of the 10 wildest, funniest, and most memorable moments in Jersey Shore history.

10. JWoww pees behind the bar

The gang’s favorite club back in the day was Karma, and on one memorable night, Jenni and Nicole decided to make their own private nightclub on the second floor.

Unfortunately, the second floor of Karma doesn’t have a bathroom, but that didn’t stop JWoww when nature called. “If you’re like myself, you can’t make it downstairs, [so] you make your own bathroom.”

Jenni ran behind the bar to do her business, peeking out to remind Nicole not to draw attention to her.

Of course, Jenni had to do something to clean up, so she used the soda fountain to “water down” the mess.

JWoww has since expressed some regret about the incident.

In one 2011 interview, she explained, “When I have kids 20 years from now…they’re gonna be like ‘I want to go out, I want to go to the club.’ And I’m gonna tell them ‘no, you gotta stay in.’ They’ll be like ‘well ma, you pissed behind a bar, what’s your problem?'”

Jenni now does have two kids, but they’re only 4 and 6 years old, so she still has a while before her fear becomes a reality.

9. Deena strips on her first night

Deena wasted no time in making her mark on the show. On her very first night, Deena accidentally (or “accidentally”) stripped in front of Mike Sorrentino.

Deena had gone into the house with Mike, theoretically to find her hat. Once she did, she modeled it for him. But while removing her dress, Deena also removed the bottom of her bikini- and due to the flirtation she’d had with Mike the whole night, some fans thought it may not have been an accident.

The introduction was certainly an eventful one, and it cemented Deena’s spot as a regular cast member on the show.

Fights were the center of the drama on Jersey Shore, and JWoww was a particularly fierce brawler.

Jenni most frequently clashed with Sammi, but in Season 1, it was a fight with Mike that caught viewers’ attention.

Mike sparked Jenni’s rage when he refused to take her back to their hotel room after Jenni vomited. She yelled at him in the club but was then escorted out by security.

Later that night, Jenni physically confronted Mike. Vinny tried to break it up, but JWoww unleashed a wicked backhand that Mike still has nightmares about.

Mike wasn’t the only cast member on the receiving end of a punch in Season 1.

When the crew went out to a bar toward the end of the summer, another group of partiers tried to steal their shots. Annoyed, Nicole confronted one of the guys in the group. The man then punched Snooki, who is 4 feet, 8 inches tall, and was immediately tackled by all of the male roommates plus JWoww.

Ultimately, the puncher was arrested and Snooki ended up okay.

Nicole has said that, in a strange way, the punch brought the crew together. After spending most of the summer feeling like she didn’t fit in, the support Nicole got from her castmates made her feel like one of the group, and the roommates were tight from that point on.

One of the greatest side characters of Jersey Shore is Vinny’s Uncle Nino.

Uncle Nino first appeared on the show during its second season. Nino and Vinny’s mother Paula went to visit Vinny in Miami, and the cast and viewers alike were amused by his wacky antics.

Nino wasted no time getting in the hot tub and flirting with the girls in Miami.

“Uncle Nino is the ultimate creep,” Ronnie later said about Vinny’s uncle. “He should be in this house. He should get the smoosh room.”

Uncle Nino was dubbed “The OG (Original Guido)” by the guys in the house, and he remains a presence on this show to this day.

By Season 3, viewers thought they had seen it all from the Jersey Shore gang, but Nicole Polizzi upped the ante when she got herself arrested on television.

After a shift at the T-shirt shop (during which she attempted to sneak beers), Nicole headed to the bar. Then, struck with an irresistible urge to spend a day on the beach, Snooki took off on the boardwalk.

“I just want to go on the beach. Where’s the beach?” a very drunk Nicole yelled as she ran away from Deena and Jenni.

Despite her girlfriends’ best efforts, Nicole remained visibly drunk in public, which eventually got her arrested for public intoxication. She was quickly released and it all worked out, but Nicole’s brush with the law remains one of the most memorable moments in Jersey Shore history.

Although Mike appeared on this list before for an injury that JWoww inflicted, his most serious wound on the show was all his own fault.

During a fight with Ronnie in Season 4, Mike slammed his head into a brick wall. Voluntarily. For no apparent reason.

In a fit of rage over Ron’s ongoing drama with Sam, Mike threw a bed frame, ripped off his shirt, and then slammed his head into the wall. He later claimed that he thought that the wall was made of drywall, not brick, and that he wanted to intimidate Ron by smashing his head through it.

Obviously, that didn’t work, and the incident sent Mike to the hospital.

Angelina didn’t last long on Jersey Shore. Although she’s appeared on every season of Family Vacation, she only lasted for 2 seasons of the original show.

Nevertheless, Angelina made her mark on Jersey Shore– mostly by fighting with nearly every other cast member.

While the roommates were in Miami for Season 2, Angelina and Mike got in a fight over Angelina’s cleanliness.

“You are the dirtiest girl I’ve ever met,” Mike said. “Shut your mouth, you dirty little hamster.”

The “dirty little hamster” line became an icon of Jersey Shore, and Angelina’s husband even has a dirty hamster tattoo.

2. Ron and Sam fight on the bed

Ronnie and Sammi’s relationship was one of the most memorable parts of Jersey Shore, but one moment stands out.

During Season 3, the pair got into a fight so bad the other housemates had to break it up. Poor Mike was stuck in the same room as the feuding couple and had to witness it all.

Ronnie began throwing various items around the room, including a bed. Samni, who was on the bed, gripped it as Ronnie threw it, creating an accidental renaissance painting that lives on in Jersey Shore history.

The fight (of course) ended neither their relationship nor their feuding, and the Ronnie/Sammi drama continued for another three seasons.

Perhaps no moment in Jersey Shore history is more memorable than Snooki and JWoww’s Season 2 note to Sammi.

After Ronnie went wild at a Miami club and then crawled into bed with Sammi, Jenni and Nicole decided that Sammi needed to know. They wrote her an anonymous note explaining Ronnie’s actions.

The note went on to cause fights for another season and a half, nearly destroying the girls’ friendship. Jersey Shore fans can now buy pillows, wall art, T-shirts, and more with the iconic words of the note, and the phrase “a cocktail waitress’ breasts” is enough to send any Jersey Shore fan down memory lane.

The note embodied all the drama, humor, and absurdity that made Jersey Shore a hit, and it lives on as the most memorable moment in Jersey Shore history. 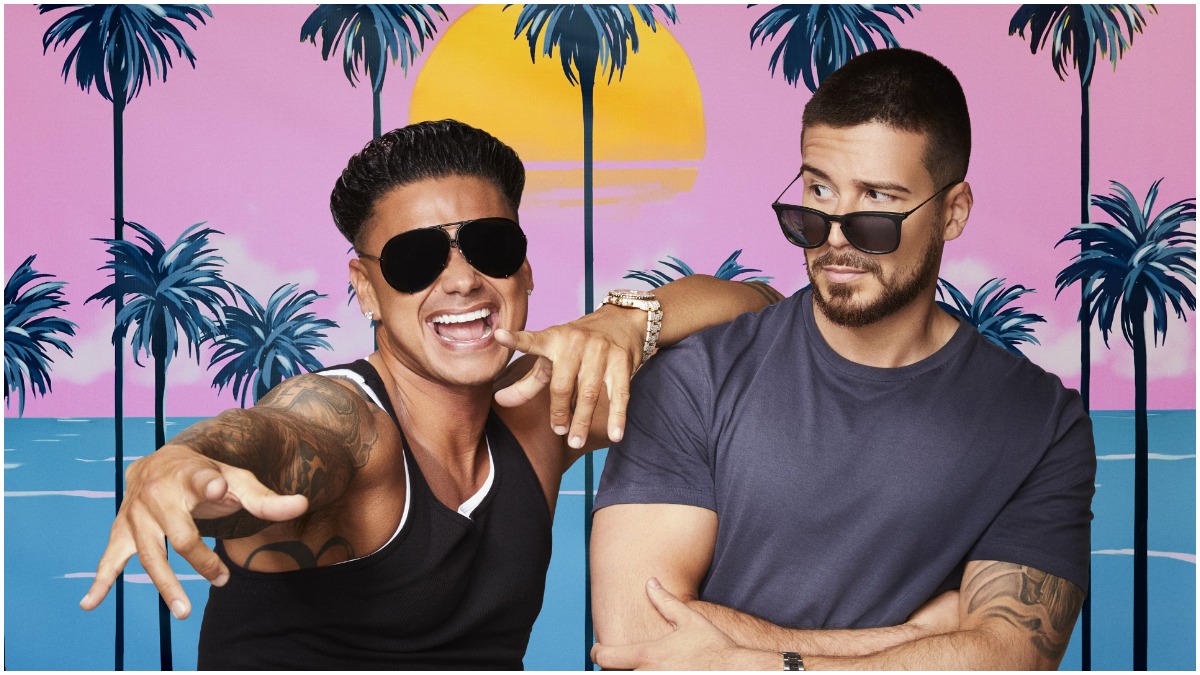