With the different locations and the difference in timelines, it made perfect sense to keep the two shows independent of each other.

However, considering they both exist within the same universe, it also made sense for crossovers to happen — particularly since viewers seemed so intent on seeing them.

Now, the various shows are a hot mess of crossovers and Easter eggs regarding how characters might have crossed paths.

For many fans, this is a rewarding experience, and they appreciated Easter eggs of any kind. Now, one of Fear’s showrunners has given viewers multiple reasons to tune into Season 7.

The timelines between Fear and the original series, The Walking Dead, are several years thanks to time jumps. It doesn’t mean that Easter eggs still can’t occur.

This is something that one of Fear’s showrunners commented on, according to Digital Spy.

And, it is something that fans can look forward to when Fear returns for Season 7.

“There will be more Easter eggs that we set up in season 7 that we will both pay off on Fear and could also live elsewhere in the universe,” Ian Goldberg said. 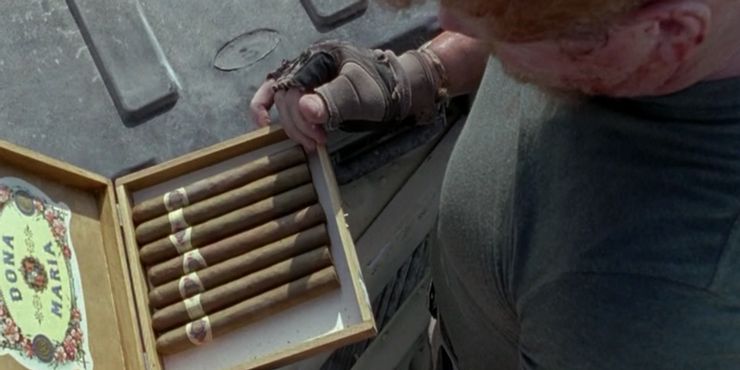 While there was no suggestion of what these Easter eggs could be, Goldberg addressed a particular scenario.

On Fear the Walking Dead, Daniel Salazar (Ruben Blades) possessed a cigar someone he met during the zombie apocalypse gave him.

As Comic Book points out, Daniel revealed he was saving the cigar to smoke “when things get better.”

This situation connected to Abraham (Michael Cudlitz), who featured in The Walking Dead and also smoked cigars.

It isn’t the first time Abraham may have cropped up in Fear either. One of Althea’s (Maggie Grace) tapes played, titled Abe/Doctor.

This tape could have featured Abraham and Eugene Porter (Josh McDermitt).

Goldberg hinted at further Easter eggs showing up in the franchise.

“One of my favorite [Easter eggs] actually goes back to Season 5. It’s with Daniel when we were in his warehouse, I believe it was Episode 504, and he takes out a cigar. A very particular cigar that he has not smoked, that he’s saving for a special occasion. If you look at the brand of that cigar, it may be the exact same brand of cigar that an iconic character from The Walking Dead smoked.”

Goldberg did not say this storyline would crop up in Season 7 of Fear the Walking Dead.

After all, with what happened in The Walking Dead, it would seem unlikely that Abraham would make a side trip to Daniel’s neck of the woods just to share a cigar.

However, as Digital Spy notes, if the story doesn’t appear in Fear the Walking Dead, it might show up in the anthology series planned by AMC called Tales of The Walking Dead.

Fear the Walking Dead has been renewed by AMC for a seventh season but, as yet, no release date has officially been announced.