In Netflix’s new hit series, Zero Chill, Canadian actor Grace Beedie stars as 15-year-old ice skater Kayla MacBentley. Along with a twin brother, Mac, whose star is rising faster than hers on the ice, the two are navigating new surroundings.

Dakota Benjamin Taylor is ‘Mac’ MacBentley, a hockey player for the Sheffield Hammers in England. The entire series is shot at the ice rinks located in Sheffield. Producers of Zero Chill went after real skaters who also were actors, and the result lends authenticity to this coming-of-age tale. Also, filming the production at IceSheffield, home of the Sheffield Steelers, made it all ring true.

Beedie is a classic beauty who is a triple threat. She’s an astute actor, the camera loves her, and she can flawlessly execute the competition-level ice skating required of her character. Beedie’s big lead breakout role is Zero Chill, and before this was seen in Motherland: Fort Salem and the Hallmark film, Five Star Christmas.

The Netflix series is more than a skating saga; it’s a refreshing family-friendly snapshot of female friendships and healthy family life. Neither saccharine in tone nor loaded with cultural snark and double entendres that so many TV series seem to pack these days; it’s a winner for family viewing.

The first season focuses not just on lucky Mac and his pro hockey grooming but also on Kayla’s figure skating and life in a new country. Kayla is making solid friendships with Sky Tyler (Jade Ma), a former ice skater sidelined, which we cannot divulge for spoiler reasons.

The series excels as a modern family snapshot where the parents (Sarah-Jane Potts and Doug Rao) are parenting and not acting like their kids’ besties.

Beedie shines in this crack ensemble; her natural abilities combined with her charisma on the screen set up a compelling tale waiting for her turn to shine.

She is delightfully pitted against the tough-as-nails Sheffield hockey coach and guru, Hammarström (Oscar Skagerberg), getting under his skin a bit as she tries to fit in while helping Mac succeed in his hockey training.

In Monsters & Critics exclusive interview below, Beedie shares with us how she fits her college studies around production and that big things are on the horizon for her as well.

Is there a season two of Zero Chill? Let’s say she is not quitting her skate practice sessions anytime soon.

Monsters & Critics: The casting call had to be very specific. Not many actors can do skate at your level. How did they find you?

Grace Beedie: Exactly through that, through the casting notice. So my agent had texted me. It was just titled ‘international ice skating drama.’ And he was like, ‘Hey, remind me what your skating experience is?’ Because like I had told them that I was a figure skater. I just looked at my phone and laughed. I was like, there’s a role where I have to skate? Like that’s mine. I need that job.

M&C: Are you at USC? Are you in Los Angeles in class?

Grace Beedie: I have been doing online school from Vancouver and still attending USC. I even still attended class while I was going up to Zero Chill in August. So that was interesting.

M&C: What is your major?

M&C: That comes in handy if you’re going to be an actor in Hollywood.

Grace Beedie: Yes! That was my plan. I wanted to have a different understanding, and a different approach to characters, and I felt that taking psychology would do that. And honestly, it really does help.

M&C: This series has an empowering female friendship arc. It wasn’t the focus of the series, but there were powerful, positive female buddy messages. How do you feel about that?

Grace Beedie: That is something that I appreciated about the show. I’m glad that that came across to you because I went to an all-girls school for high school, and so female friendships are really important to me. And I also think that you can’t have two girls who have similar interests too often in the media without them being pitted against each other or compared.

But I think that this show does an excellent job of showing a healthy friendship and how even through hardship, they can forgive each other and they’ll have a love for each other at the end of the day.

M&C: Your series also has a healthy, communicative family unit, there were issues, and you were angry that Max seemed favored. Still, it showed the collaborative efforts of all your family. It wasn’t two-dimensional. There were many layers in the relationships with your character, with your brother, with your mother, with your father.

Grace Beedie: I think that because it’s not so Caleb versus the family, like you said, it allowed me to have a compassionate understanding of where Kayla came from because of her actions, like breaking into an ice rink.

Well, you can understand them from the perspective of if she [Kayla] doesn’t feel like she matters, something like that wouldn’t translate in her brain as being not okay because she’s thinking like, well, nobody’s going to care anyway.

So that made sense for Kayla as a character. But I think that even just before we started filming, we had a family meeting basically and discussed how our family unit would have interacted beforehand. Obviously, in the story, her previous life in Canada and what it was like and what our weekly routines were.

I think that all of us came at [this story] from a place of love. And of wanting to tell a truthful story of a family that cares about sports and cares about each other. I think that came across.

M&C: Can you talk about the production logistics and being in England? I know you were in Sheffield. Hockey is a thing in England, and who knew?

Grace Beedie: I didn’t either until I got there, and then I went to Sheffield Steelers games weekly. As a cast, we all did that. And the crowd loves them. It’s such a community thing. It helped all of us, I think, meld into Sheffield well, seeing how passionate they were about hockey.

I was surprised, especially coming from Canada. I was like, Oh, okay. I’m familiar with hockey. I don’t know how familiar they are, but I was wrong! I totally didn’t know either!

We filmed that at a fantastic facility in Sheffield, and it has two ice pads for filming on the ice. We took over one of them, and in terms of actually filming on the ice, we would have a dolly pushed around by a couple of people, and everybody was wearing grips on the bottom of their shoes. It took everyone like a while to get used to them.

It was funny because people, they’d be like, ‘Oh, like I’m going to buy these grip shoes.’ So people started getting really into it. It was fun. But to get the really immersive shots, what they would do is have me break down the program. I would do a certain section and have me get as close to the camera as possible.

So in the Beethoven scene where I’m in a red dress and doing the program, I leaned back at one point in the program, and one of the times that we shot that, I got very close to the camera. I was like, cool…and I did it, and then I almost hit someone like one of the grips because I was going by so close. And you know what? It [the shot] looks great. It looks awesome. It was usable.

They cared a lot about having our skating ability as actors put on display. I did have a body double who was fantastic. I was a competitive skater, and I’ve skated my whole life. I would do the entire scene just with single jumps. The landings and takeoffs were cohesive, but then Morgan, my double, would do a double or any variation like that.

M&C: How long were you there in Sheffield filming?

Grace Beedie: Well, I got there in October of 2019. We trained for nine weeks together, and it started; it was cool. It started with just me Jade, Dakota, and then gradually, as they started to cast the other supporting roles, they filled in.

It was like being at summer camp and like you’d have a new guest every couple of weeks, and we all just trained together and got to know each other well. I think it added a lot to telling truthful stories of our friendships in the show.

We started filming in December and then when we went away for Christmas and then shot from January to March, and then with COVID, we got shut down with two weeks left. I had to go back in August. I guess a total of five months.

Thankfully we had finished pretty much all of the blade, star competition, all my stuff for my parts that we did that week literally before the world shut down.

M&C: Has anyone spoken to you about season two or a series two, as they say in England?

Yes, I have not heard yet, so fingers crossed. Of course. All of us would love that.

M&C: How many semesters or years left? Are you a junior or a sophomore?

Grace Beedie: I don’t know; technically [I am] a junior. I started late and then went on professional leave to film the series. I’m grateful that online school has been an option because it’s been great to be able to do that and work simultaneously. I think I have a couple of years left. I don’t know.

M&C: I love the fact that you are a genuine skater. Is it something that you do still to keep those skills sharp?

Grace Beedie: Yes. Unfortunately, in British Columbia, my home province, there is currently a restriction where people 22 and older can’t participate in indoor sports. Still, since I am in LA right now, I’ve been able to skate at rinks here.

I still love it, just as much as I did when I was younger, and it’s a good form of exercise for me, and I enjoy it. Obviously, in case you get a second season, I want to be in my prime.

M&C: Have you ever entertained the idea or the thought of maybe producing stories about female skaters? Tell me what you have planned on your horizon, other than school?

Grace Beedie: For acting, honestly, I would love to get into the world of filmmaking and even to direct. I think that I love everything about my job. I believe that a way to improve on my job is also to understand everyone else’s job.

Because at the end of the day, it’s not just up to me. If a show gets made, everybody’s job is important. I think that diving into that would help me in the future with whatever I go into professionally, and if I want to direct, or if I want to produce something, I am interested in doing that.

M&C: Are you booked for any other productions? Anything shooting in LA, anything on the horizon there?

Grace Beedie: I do have something coming out soon that I’m not sure if I’m allowed to say, but yes, things are happening, which is exciting. 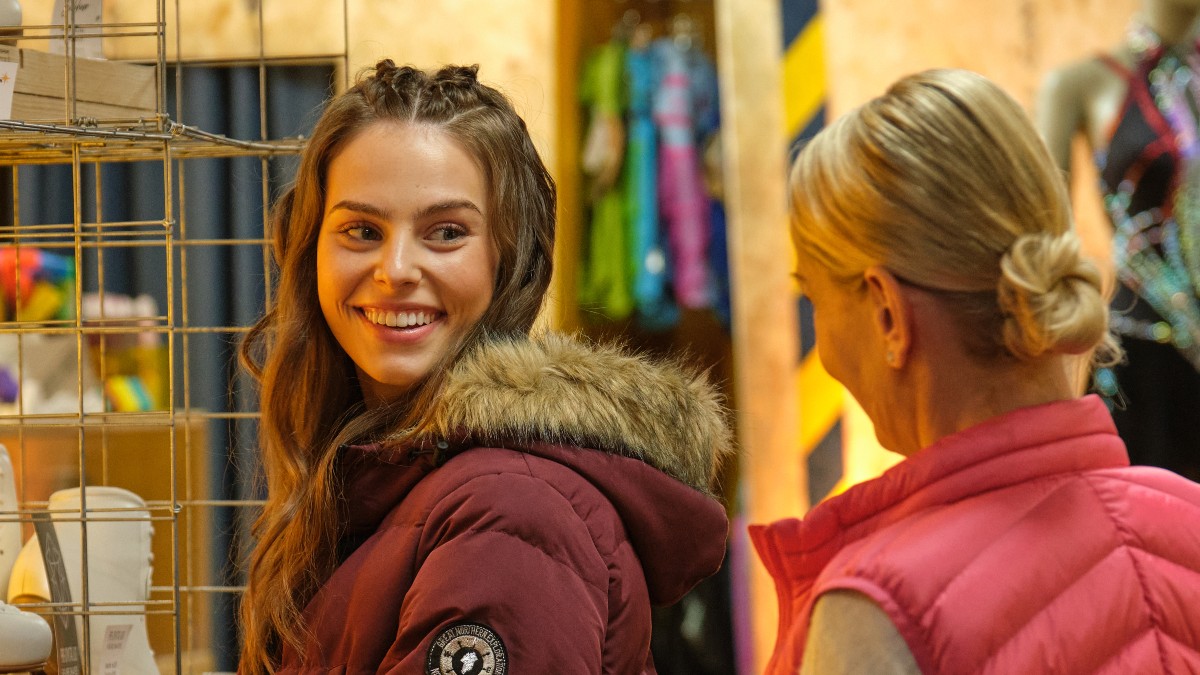 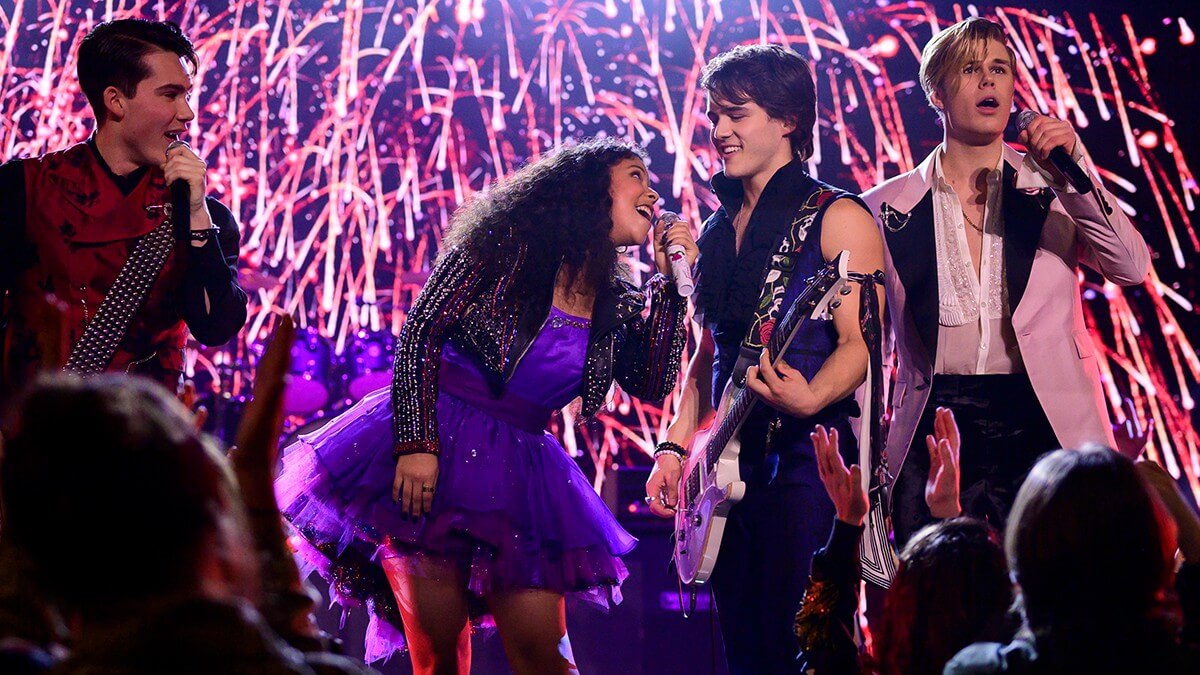