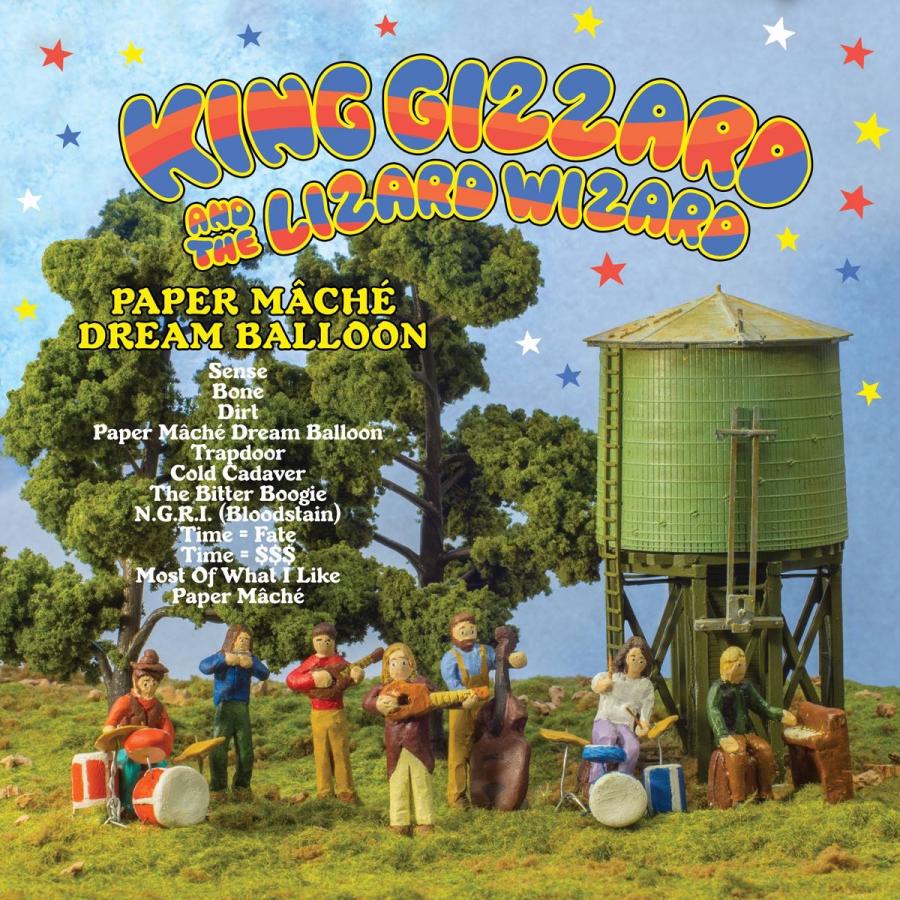 Trippy bliss are the first two words that come to mind when you hear King Gizzard & The Lizard Wizard. I mean, with a name like that how could you expect anything else? I had the pleasure of discovering the seven-piece psych rockers from Australia a few months back when the FYF lineup came out, and my eyes were immediately drawn to the name. Not surprisingly they ended being a band that I have been following very closely since and have had the opportunity to share my love and knowledge of them with many people.

In the span of five years, these absolute badasses have been hard at work releasing two EP’s and SEVEN albums!! Not only that, but it has all been released on their own label, Flightless. The members of this psychedelic dream include Stu Mackenzie, Ambrose Kenny Smith, Cook Craig, Eric Moore, Joey Walker, Lucas Skinner and Michael Cavanagh. Their newest album, Paper Mâché Dream Balloon is their second album of 2015 and still keeping with the psych rock, but skewing it a bit and adding some pop elements as well. What interested me most in this album is that it’s a completely acoustic record. Using only, acoustic guitars, fiddle, double bass, clarinet, drums, flute and harmonica.


The first groove “Sense” opens up jazzy with soft-spoken and beautiful lyrics. Using all beautiful acoustic instruments to start the tone of the album off as something tamer. It’s difficult to listen to the sweet melodies of this song and not feel even the slightest bit of euphoria. It’s a tune for the romantics with its sexy bass, and lightly strummed guitars. I’ve long had the debate about whether or not flutes are cool. Whatever your opinion might be we can’t deny that flutes are beautiful, and can add a mystical aspect to any song that it’s used in. “Dirt” opens up with a flute that makes you feel like you are living in the time of Shakespeare drinking your giant glass of wine with a turkey leg that’s bigger than your arm. There’s a magic in this song, due to the ease and simplicity of it.
“Trapdoor” is definitely the odd song out of the album, that seems like it wouldn’t make sense, but as a whole it somehow flows very naturally. It’s a freaky pop song that sounds like it would be in a cheesy B movie. Yet, that’s the most charming part about it. With shakers that make you get goosebumps all over and a build up in the beginning that makes you feel like the boogie man is about to jump out of your closet, this song is the comedic relief of the album. “Cold Cadaver” is whimsical with a sense of mystery to it. It’s hard to tell if it’s a love song or a song that touches on the subject of death. Or even just the combination of both. Yet, like any good song it is written in the vain of being a happy tune for sad folks.
‘“The Bitter Boogie” slaps you in the face with the blues and is completely unexpected from the band. The guitars are expert, with the bass being a strong driving force, and the vocals having a slight roughness, but still keeping the softness that the band is known for. It’s an attempt at something new for the band, that works in their favor and they add their modernizing touch to it that makes into a wicked song. It would be interesting to see the guys do an entirely blues album. Closing out the album “Paper Mâché” goes full circle to bring you the melodies of each song and to remind you one last time of the experience that you had.

All in all this album was extremely successful for the seven piece and it showed a wide range of personality and talent that they have. It was interesting to see such a natural album that wasn’t drowning in effects. The guys of King Gizzard & The Lizard Wizard have been staring to make some serious buzz this year, and they showcase their talents through their albums which they come out with at least twice a year! The psych rockers are a band that seems to be able to met the musical needs of just about anybody. So, do yourself a favor and go on a journey of listening to their discography.