There is no place like Red Rocks, the beautiful auditorium sits within three massive boulders in the mountains of Morrison, Colorado that can only be reached by winding trails and tiny roads. The music reverberates against the rocks to produce some of the most vibrant sounds I’ve heard at an outdoor venue. Which makes it perfect for Electronic music. 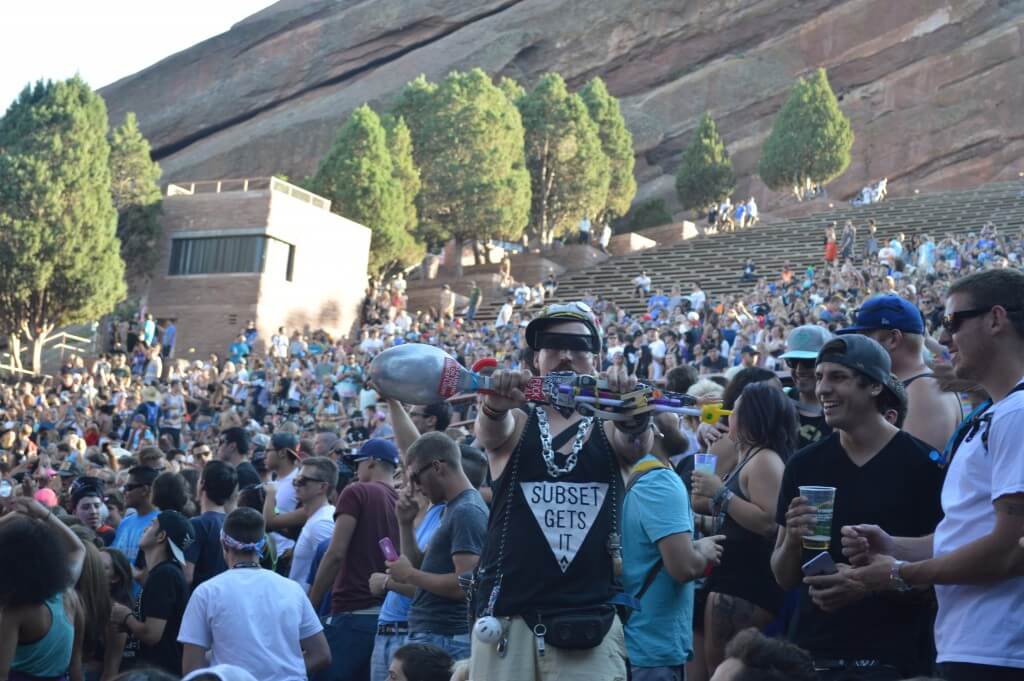 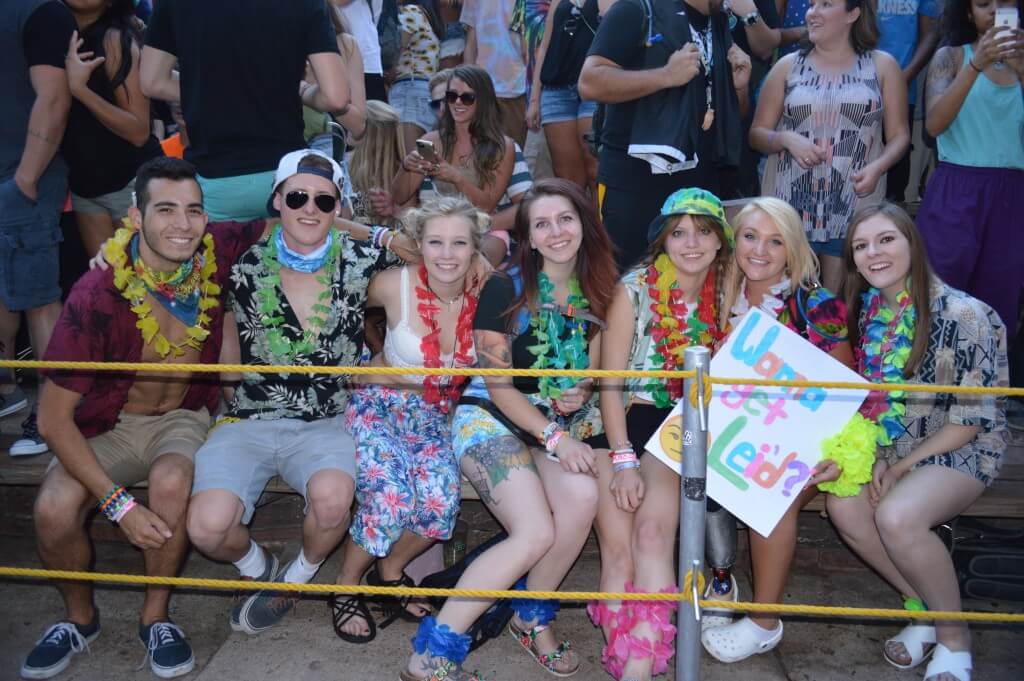 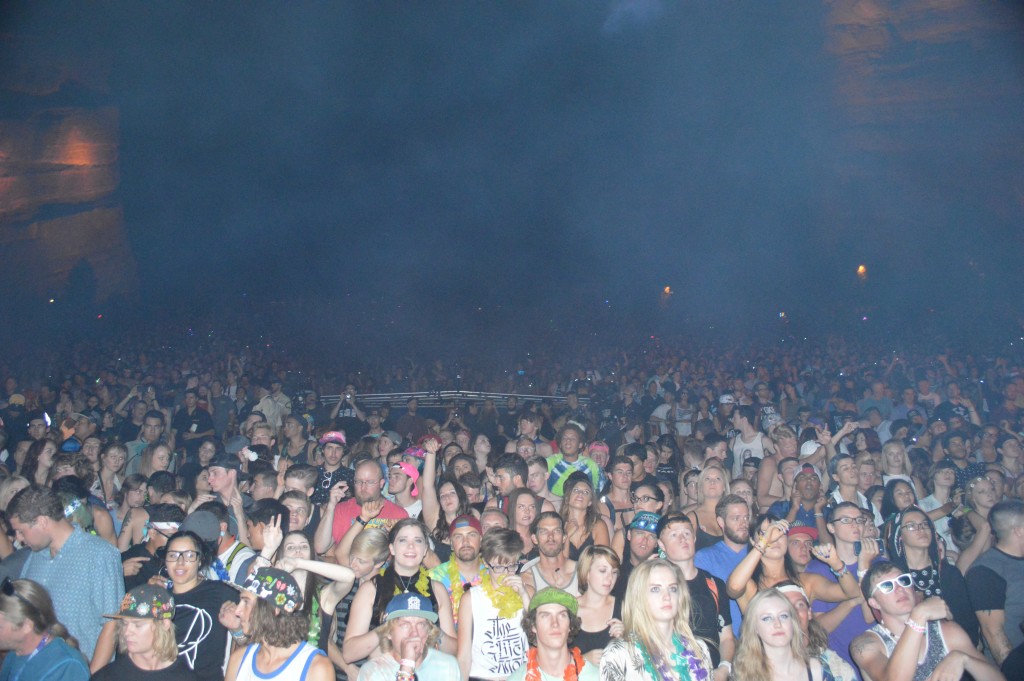 Doesn’t sound like it should work but, ironically enough, the natural acoustics provided by the rocks compliment technology based music very well. This Thursday saw the third outing of HARD Red Rocks, the LA-based event company took over the amphitheater with a sold out show. “Colorado is f**king awesome, I love it here” Gary Richards told me backstage, Richards is the founder and CEO of HARD and is also known by his Techno meets House meets Hip-Hop alter ego Destructo. He was very excited about the turnout.

Needless to say, the scenery was gorgeous, the afternoon sunshine pouring on the old boulders made them look like they were painted with shiny new red paint, The very top between the two main rocks, you can see the shimmering Denver skyline in the distance to remind you how far you are from city life. The afternoon started with a set from Option4, whom unfortunately I missed due to navigating the trails leading up to the venue (maps are a must here for newcomers).

Around 5:30 saw a bass heavy, thumping set from NY-based producer Branchez, his impressive blend of House and Trap was a great warm up for the evening. As every corner of the venue filled with hyped up ravers, Branchez dropped low end bombs that got all of the early arrivals ready to party. This was my first time seeing him and I can say out of the scope of burgeoning bass meets house producers, Branchez is a must for anyone looking for a high energy, “trap arms” inducing set.

At the end of Branchez set, Richards, or here as Destructo, came out and revealed his DJ table that was decorated with some pineapples, seeing as how he has become Electronic music’s pineapple captain, it was only fitting. For over an hour he bounced between thumping house tunes that rattled your bones to hip gyrating worthy hip hop. I’ve seen him play many times and completely blow away crowds with his deft mixing, but his amalgam of Hip-Hop, Deep House, Techno, Future Bass (sub-genre nomenclature is a thing), or as it has been dubbed “G” House, got the rapidly filling crowd insanely pump, people were either dancing their asses off or sashaying into crowd to partake in said dancing. 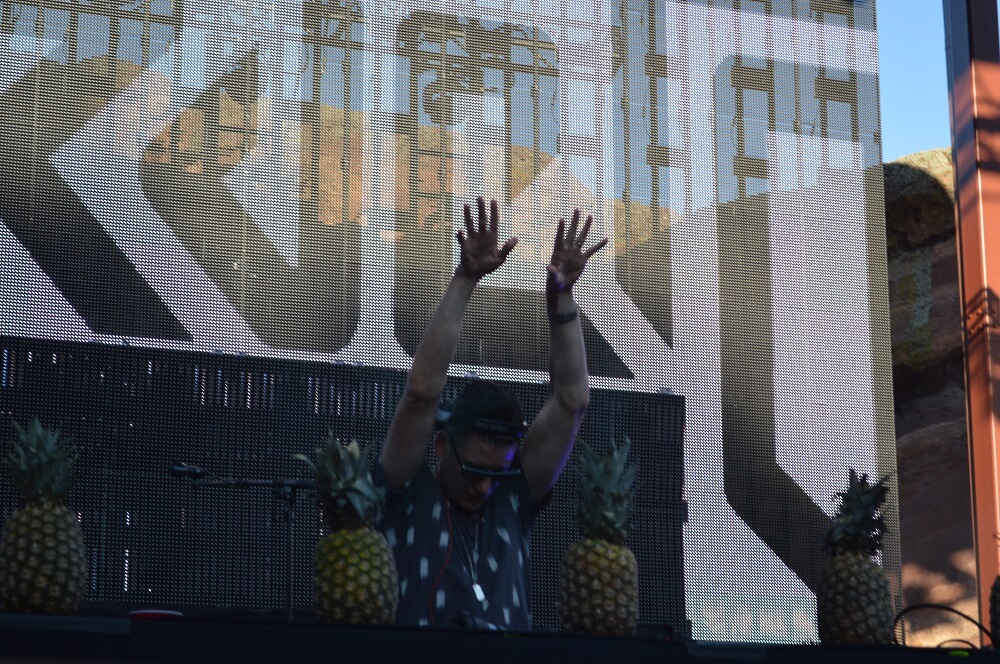 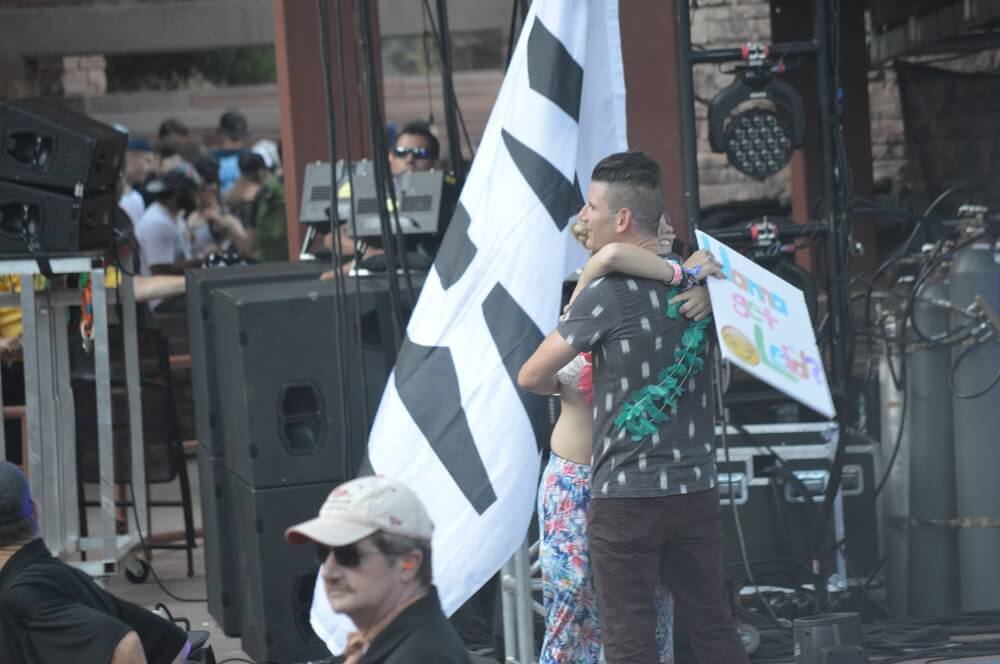 It was great to see Destructo integrate more of his incredible originals into his set, including the Techno Banger “Technology”, minimal thumper “LA Funky”, wobbly house treat “Higher” or the more recent G-House Smasher “Dare U 2 Move”, added bonus was some unreleased work that sounds great, including his mid-tempo closer that I will, for the time being, call “Nobody Listens to Techno”, had an Gesaffelstein meets LFO sound I was immensely stoked on.

After this came a stunning performance, and I use the word performance reverently in referring to Porter Robinson’s cerebral Worlds live show. His set was a live rendition of many of his songs off the eponymous album, opening with crowd favorite “Sad Machine” which can be immediately recognized by it’s warm and welcoming melody, laid back beat and mellifluous vocals. Seemingly everyone in attendance sang along to the song, which was one of the most spectacular moments of the evening.

Robinson, who jumped between vocals, keyboard, sampler and drum pad the whole set, proves here, as he as also with Worlds, that he is meant to transcend EDM stardom into the stratosphere of compositionally brilliant artists, he shifted his sound from canonical house, though impressive house at that, to more abstract, ethereal arrangements that instill wonderment in even the most numb listener. It isn’t exactly avant-garde, but Porter’s great new direction may inspire other Electronic artists to follow in his path, embracing their music regardless of genre and appeal. Along with his performance was a jaw dropping, visual show that presents the girl within the machine offering love at the end of the world, it was Anime coupled with 8-bit reverie, plus the fusillade of colors throughout that felt tightly in sync with a mostly unprogrammed performance. Having seen his DJ sets, I was impressed, but with Worlds and it’s accompanying show, I’m a fan.

The penultimate, and possibly most intense set of the evening was super duo Dog Blood’s seizure inducing hour of relentless bangers and throbbing beats. Dog Blood, consisting of the bass music’s reigning king Skrillex and his best pal and Electro legend in the making, Boys Noize, dropped strident tracks that kept the crowd screaming and jumping throughout their whole set, abridged versions of their songs poised with a hodgepodge of artists from A$AP Rocky to Valentino Khan. Skrillex and Boys Noize work really well with each other as you could probably glean from their songs and DJ sets, though they have great solo careers and a slew of other side projects, together they make tenebrific tunes that are the sonic equivalent to a middle finger, the punk energy in each song or mix make them a must for anyone who is a fan of their separate works.

Alex Ridha and Sonny Moore, Boys Noize and Skrillex respectively, have an incredible rapport that is reflective in their mixing, the two constantly bounced around each other to take control of the mix, both got on the microphone to hype the crowd. Moore jumped on the table to wave the Colorado state flag and jumped around for every drop Ridha dropped in his absence from the decks. The whole set they were anointed with a nefarious red light, which complimented their dark, visceral mix immensely. Having seeing both these guys countless times and once before as Dog Blood, this was possibly the best set I’ve seen them do combined. Hopefully they can do this project more in the future.

The night ended with a booming performance from the percussive triumvirate that is Glitch Mob, who brought their awe-inspiring stage show, equipped with synths, samplers and badass drums, including the four toms shaped like jet engines. This performance was equal parts abrasive bass music and mellow gaze out tunes.

The Angeleno trio, consisting of members Ooah, ediT and Boreta, tore the whole night down for the hermetic audience. Playing a lot of tracks off of last year’s Love Death Immortality and my personal favorite, “Fortune Days”, plus a magnificent live rendition of The White Stripes’ “Seven Nation Army” shined the ubiquital song in a great new light. The constant movement the trio had while switching between synths and percussion was nearly a blur, the sheer fervor these guys have while performing live makes them a great treat, regardless of what genre you enjoy. This performance was the perfect end to a perfect evening of amazing music in one of the prettiest places in the world.