For a disaster drama with a seemingly endless bank account to draw on for its gargantuan effects, San Andreas is surprisingly torpid and unemotional. A couple of dicey moments an action adventure film do not make; sure it’s fun to watch city buildings implode, but when they simply refuse to stop imploding and carry on like they’re fresh for an hour expecting some kind of fright response, well, I’m working on my grocery list. 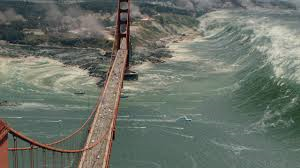 Pacing in such films is key. Take Jaws. The film unfolds, with a few extremely well chosen truly terrifying frights, nice insights into human psychology and masterful direction. Take T2, same thing. Take any film that is completely dependent on the old-fashioned and the entirely erroneous jolts per minute theory – that the more jolts the better the film.
It’s efficient and easy to layer effects and repeat and repeat with CGI, but it’s bad filmmaking. Now I’ve never seen San Francisco Bay after a 9.6 quake and the ensuing tsunami and I’ll bet it looks like this, sunless, shades of brown and grey and indistinguishable from the ocean. But the look is so off, so flat and wrong, that it removes all sense of reality and proportion. It’s simply a full screen early video game. 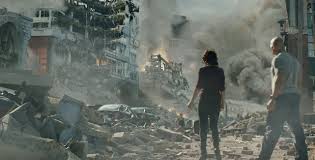 The gist is that the San Andreas fault, the constant threat to life in California, is about 100 years overdue in wrenching apart. Set pieces suggest the worst – a girl hanging in her car from a mountainside after small avalanche caused by an earthquake, a scientist measuring earth’s movements inside the Hoover Dam which is consumed by an earthquake, and from there one after another. Johnson’s pilot has one job – to rescue his family members from increasingly dangerous situations.

The film suffers from a surfeit of well-worn disaster memes and phrases and people doing the wrong thing for effect, to find more disaster. Instead of going downstairs, they go upstairs, instead of getting out of a building, they go in. They say corny things to one another, gleaned from previous disaster films.
Here is a lot of the dialogue: “Everybody out!”, “Everybody, go”, “Everybody, down”, “Everybody, run”, etc. Timeless phrases. I think people are prone to swear or go silent when a skyscraper is coming for them, but as I say, I’ve never been in that situation before.
Dwayne Johnson is our heroic helicopter pilot and rescue personnel and his are good hands to be in. He’s pretty good and expresses himself well, keeps calm as he has been trained to do and even shed tears remembering his late daughter. He experiences emotions, where the rest of the cast is pretty much left to support him and the CGI.

It’s nice to see Johnson’s character paired with a woman (Carla Gugino) who is age appropriate. His daughter (Alexandra Daddario) must fight for her life in the rubble of Frisco in a super skimpy top, taking on the sex role the lead actress would normally assume.

The movie’s best moments are watching and listening to Paul Giamatti delivering horrific news about the potential for devastating earthquakes, first to his students at Cal Tech then on a newscast once the quakes begin. I don’t feel cheated when he’s onscreen.
The film also touts the traditional family as one bounder, a threat to the sanctity of the first marriage, is nicely dispatched. Predictable outcome for all.
Directed by Brad Peyton
Starring Dwayne Johnson, Carla Gugino
Action Adventure
Rating: 2.5 / 5