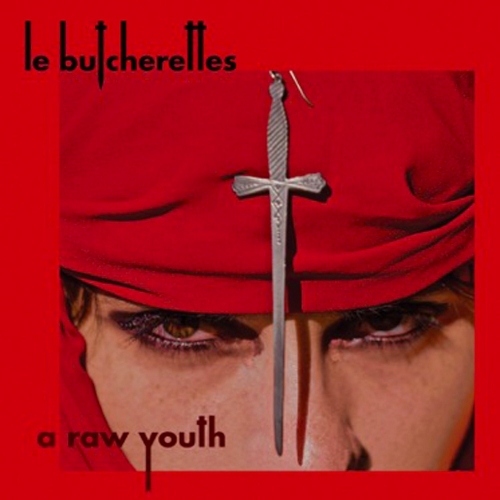 Hearing the names Omar Rodriguez-Lopez, Iggy Pop, and John Frusciante associated with one album is enough to get any rock n roll lover’s ears to perk up.

Le Butcherettes have all three of these incredible musicians working on their album, and the album is everything you could hope for. A Raw Youth is the third album by Le Butcherettes that Lopez has produced, and with some kind of unknown mystical powers were able to get the street walking cheetah, Iggy Pop to collaborate on a song.

Le Butcherettes was formed in 2007, and consists of Terri Gender Bender (greatest stage name ever), Chris Common, and Jamie Aaron. The trio’s new album is a focus on the raw youth of today, and the daily struggle that they go through dealing with the hardships of modern society. An album that reaches out to the kids who feel alone and unaccepted, and constantly feeling like the world is out to get them. The album is straightforward, in your face and tells stories that need to be heard.

“My Mallely” is an empowering anthem for all the lost kids out there in the world. Gender Bender’s voice is strong and her lyrics do more in three minutes than some prescription medications do for people in a year. She yells to us, “You’re beautiful” with such personal emotion it’s as if she’s sitting across the table from you trying to tell you this, and make you realize the capabilities that every individual has.

The tune that really highlights the album is, “Sold Less Than Gold.” A haunting look at women who are sold into marriages or sex slavery, and what that does to their innocent souls.

The song itself is very calming and catchy, and the juxtaposition of the twisted dark lyrics with her strong female voice is bound to make you question what horrendous acts are happening to people still.

“La Uva” featuring Iggy Pop, explores the fragile individuals we all know, and how people take advantage and walk all over them. Pop’s raw and sinister voice is the perfect undertone for Gender Bender’s softer and more feminine tone. His voice is almost acting out exactly what the song is explaining; being overpowered by individuals.

Yet, there voices come together for the chorus to make one big cacophony of noise, and in what sounds like a fit of anger they become the same individual for just a moment. Gender Bender is a truly incredible song-writer. She fully becomes the characters that she sings about, and proves to us how truly committed and incredible of a songwriter she is. On the “Hitch Hiker” she becomes two people.

A hitchhiker, and the man that picks up the hitchhiker. She does an incredible call-and-response between the two characters, and she lowers her voice to become more masculine, and in doing that she makes her voice sound sadistic and evil, foreshadowing to us that something bad is going to happen. Of course the song itself is catchy with bouncing keys and upbeat drums, while Gender Bender sings about murder.

Le Butcherettes are the modern punk rockers that are keeping that scene alive. They’re filled with angst, crunchy guitars, and a passion for the music. They’re eccentric in their lyrics and stage performances and make you feel like you’re cast under their mystical spell when listening to their music.

Gender Bender goes against all the stereotypes that people have against women and turns them into something whimsical and creative.
3.5/5